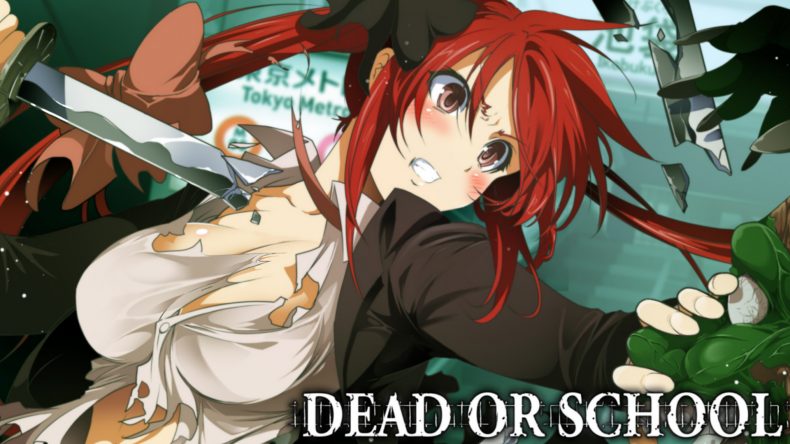 Given the region-free nature of the Nintendo Switch, the import scene has been steadily flourishing over the years with many fans of Japanese and Asian games resorting to buying from other countries when games haven’t been confirmed for local releases. Dead or School is a game I saw advertised quite a bit on import sites since the Switch version that released last year included English support. I ended up getting the game on Steam to see how it was before importing the Switch version. My experience with the game on PC was good but I felt like the game wasn’t worth the asking price. Fast forward to now and Marvelous Europe has released Dead or School on PS4 and Nintendo Switch in the West including a physical release in Europe.

Dead or School is a hack and slash RPG by indie developer Studio Nanafushi that debuted on PC before seeing PS4 and Nintendo Switch ports later. The game was originally supposed to be funded by an Indiegogo campaign which failed but the team managed to get it out on PC initially. You play as Hisako who is trying to deal with the zombies in Tokyo and eventually build her own school. Humans are forced to be underground but Hisako aims to take Tokyo back. The plot is pretty throwaway and you will find yourself wanting to skip the cutscenes. The plot moves from so bad it is good to just plain bad quite often. Gameplay is definitely the highlight here. This is a metroidvania with lots of exploration and nice levels. Even initially, combat is very nice with you starting out with melee, guns, and launcher type weapons. Dead or School has very nice upgrade options for gear as well with a good loot system. The skill trees for each weapon type are also nicely represented by a chalkboard. I appreciate how the tutorial here actually has short videos demonstrating various things as opposed to just static text.

This is a 2.5D game and despite the changes in perspective sometimes, you need to deal with enemies to your left and right only aside from boss fights that are pretty unique. My one complaint with the gameplay is that weapons and attachments for weapons need to be manually picked up and aren’t automatic when you walk over them like other drops.

Dead or School might seem like a fanservice focussed game but there actually isn’t much of what you’d expect here. There’s a uniform break mechanic called “torn uniform state” that has your attack and defense increased for a little while. There’s definitely a disconnect between the quality of designs for the main characters and some of the side ones or even the enemies. Thankfully the boss designs are good. Visually, Dead or School is a mixed bag. The character portraits are well done and Hisako’s animations are nice but the environment isn’t great looking. The interface itself needs some work as well. This game is basically carried by its gameplay, level design, and character designs because nothing else aesthetically is pleasing. Performance on Switch isn’t great, either. It never feels smooth and there are frame pacing issues and long load times. While it is great to be able to play this on the go, I would recommend getting it on PC or PS4 (assuming it runs better there). The game itself looks a bit blurry when played docked as well.

Dead or School features only Japanese voice acting and the music is serviceable but some of the sound effects are bad. The sound when you dodge in particular is annoying. In terms of localisaton, there are some elements that are left in Japanese. The main menu has a small preview of each screen like settings or status and these previews use the Japanese menus for some reason.

Dead or School has a lot of potential but feels rather unpolished for its current asking price. The levels aren’t really great looking but are designed well and the core combat, upgrade options, and character designs with a small bit of fanservice basically save Dead or School. If the performance issues were fixed, I’d enjoy my time with this a lot more. If you enjoy gameplay focussed experiences and can tolerate some jank, Dead or School will be worth getting when it drops in price.

If you enjoy gameplay focussed experiences and can tolerate some jank, Dead or School will be worth getting when it drops in price.