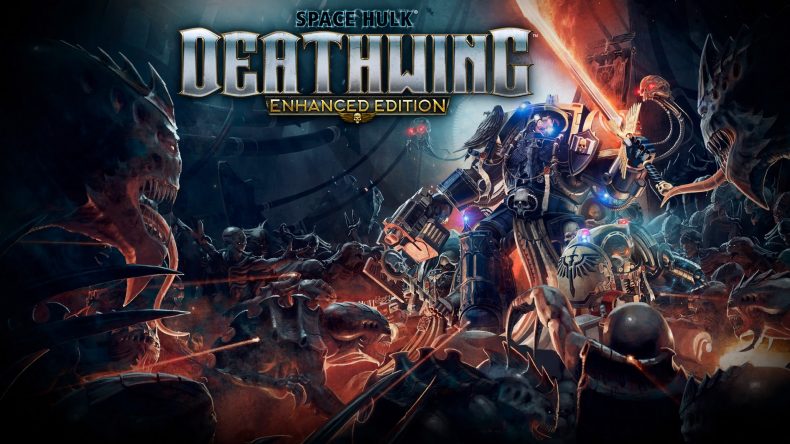 Warhammer 40K is an iconic franchise for nerds like moi, but its transitioning to video games hasn’t always been smooth, or successful. Space Hulk: Deathwing – Enhanced Edition falls between fun and tedious, and the best way to enjoy it is via the multiplayer, but again, it’s only ever good if your team is working together.

You find yourself as part of the the Dark Angels 1st Company on an exploration mission to unearth whatever is aboard the abandoned Space Hulk (thing big ass space ship). Along with two other soldiers, you hop on board and uncover not only secrets thought lost forever, but Genestealers: xenomorphs with extremely violent tendencies – those tendencies to rip you limb from limb. If you’re familiar with the Dark Angels or the Horus Heresy, this game will do a great job of putting a smile on your face, if only for the story and the obligatory references to the franchise. That doesn’t mean newcomers won’t find enjoyment in it. The environments may be bleak and dark, but the architecture is stunning, and whilst the levels can take a while to trudge through, there are a lot of fine details for you appreciate. The sound design is also spectacular – the Genestealers’ screeches are deafening and unnerving, meaning a frantic fight to gun them down plays out in intense fashion. I played a fair amount with headphones just because I loved the work the game did with creating a terrifying atmosphere.

Manoeuvring around the levels is tedious, many because of the hulking armour you wear. You can sprint, but not for long periods of time, so often I found myself at the mercy of an enemy attack. You get a couple of weapons to choose from, which can be upgraded, but you can also purchase new ones as you progress. Melee weapons help to finish off the last few aliens of an attack, whilst the bigger guns spray bullets and feel weighty when firing – one of SHDW’s finest attributes. Their are also psychic abilities you can use in battle that’ll send fire blazing across the floor, or lightening to shock and kill a significant number of enemies which can be incredibly useful if you’re stuck finding time to reload. The Genestealers don’t vary that much. Some are feral savages, whilst others use their intelligence and weaponry to attack from afar, and the way in which your minimap has a seizure every time they approach creates tension in the best possible way. There’s a clear inspiration from DOOM and having that fear of an impending attack continues right until the end; it never gets old as you go from moments of calm to unadulterated violence.

Your two AI-controlled brothers cause the most headaches when playing. They often walk into the line of fire, or block doorways you’re trying to keep shut so enemies can’t get in. You can open up a wheel that allows you to move them around i.e. follow you or attack, but it’s not smooth for you as a player to transition from one to another, especially in combat. They can also heal you which helps greatly, but you have to order them too and when they need medical attention, it’s up to you to tell them to apply the bandages. PsyGates can be opened a limited number of times each level, and by returning to your hub briefly will allow you to resurrect fallen comrades or change weapons and psychic abilities you’ve unlocked. The PC version had many issues with bugs and glitches, and whilst the game isn’t filled with them in the Enhanced Edition, I did find some that really bothered me. There are still framerate issues that persisted throughout, and loading screens often took forever, and in the last 10 seconds or so you were listening to bits of music of SFX that should start when you load back in. Sound also clipped and jutted around when playing, peaking when battles were in full effect.

Multiplayer is where Space Hulk: Deathwing shines, mainly because the four of you are taking on campaigns with competence and not poor AI. The standard “jump into a level and take on waves of enemies” is alright, but the Special Missions are fun. You’re thrown into one of the game’s levels and given random objectives to fulfil, meaning you never know what you’re going to be up against.

Space Hulk: Deathwing – Enhanced Edition isn’t the best FPS on the market, but it isn’t the worst. The controls could’ve been better mapped, the AI of your teammates is poor, and not forgetting the weird auto-save system, though. It’s never clear when it saves, so it’s hard to know when you can jump out if you’ve had a rest. The enemies in both single player and multiplayer games are fantastic, and the environments look great. Throw in the excellent sound design and you’ve got a Warhammer game that’s certainly worth a go on, despite its flaws.

If you're looking for a science fiction FPS that'll feed your hunger until the heavyweights arrive, give it a go. Despite its flaws there's still fun to be had.