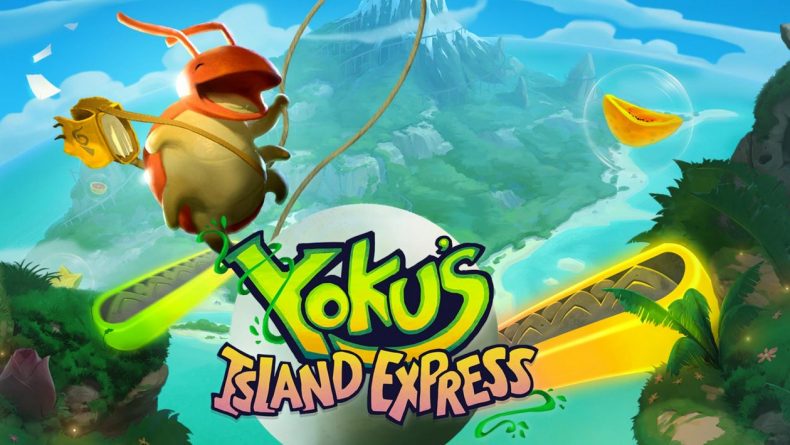 Have you ever played a pinball game and thought “you know what this needs? A story and some Metroidvania elements?” No, me neither. Clearly, that’s what the folks at Villa Gorilla thought though, and so Yoku’s Island Express was born.

Arriving on Mokumana Island, our plucky little Yoku (a dung beetle), is taking over as the island’s postmaster. His arrival is a little rocky, as he’s washed ashore by rogue waves after some dark force menaces the normally idyllic locale. Turns out that some evil entity has turned up and is wreaking havoc on the natives and the various protectors of Mokumana. It’s up to little Yoku and his ball to save the day.

Why does Yoku roll around a ball? Well, imaginary reader’s voice in my head, that’s because this game isn’t your typical adventure. As I mentioned earlier, Yoku’s Island Express mixes Metroidvania with pinball. It’s an extremely unlikely mashup, one that has no right whatsoever to work, but it works surprisingly well. You’ll wander around the island using the left stick as normal, just having to account for the inertia of the ball, but the left and right triggers will activate the blue and yellow flippers that little the game world, sending Yoku flying through air, tethered to his ball. This pinball idea essentially makes up the puzzles and boss battles throughout the game, with each “table” growing more and more complex as you progress. One particular boss has you juggling Yoku and three others, trying to line everyone up in order to pummel through the creature’s defences, before flinging everyone at its face to whittle down its health bar. It’s all good fun, but as with any pinball table, you’re sometimes at the mercy of both luck and physics, and that can sometimes grow a bit tiresome.

One thing that never grows dull is the visual style and the overall tone. Yoku is adorable, as is almost every character you’ll meet on the island. The vibrant palette and quirky characters makes for a quite original, visual treat, which a nice change from the number of dark and violent games out there. There’s a great sense of humour on display too, from the old rat that wants you to find her dust bunnies so that she can give them a bath, to the Skull gang’s leader, perched on a boiling water spring, trying to stop the whole place from exploding; the cast of characters is ridiculous, in the best way. The whole thing is adorable, to the point that I found myself smiling as I played.

Being a Metroidvania, or at least an open-world adventure with Metroidvania-like features, this means that there is a rather substantial amount of content on offer on the island of Mokumana. Each region is fairly large, with a number of collectibles and secret areas for the completionists among you, but also stuffed with side quests and puzzle tables for you to sink your teeth into. You can also tackle the main quest in a number of ways, as you attempt to beat back the dark entity that is threatening the peace of Mokumana Island. You’ll eventually need to bring together the island’s leaders, but finding them is part of the fun – exploring the island and uncovering the previously greyed-out areas of the game’s map.

It isn’t often that I find a game that takes me by surprise like this, making me smile and laugh as I roll around the island, but that is exactly what happened with this delightful title. From the charming opening movie to the wonderful title sequence, Yoku’s Island Express will use its adorable charms to pull you in and, unless you’re a heartless husk, you’ll fancy sticking around until the end credits too.

One part Metroidvania, one part pinball game, Yoku’s Island Express is a beautiful mashup that just shouldn’t work. But it does, and as a result, it’s just wonderful.