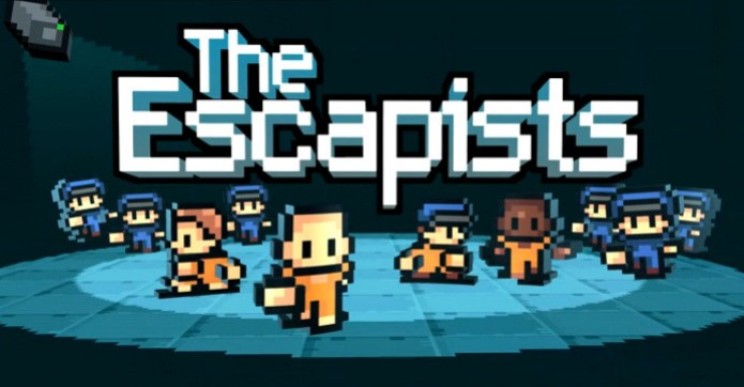 It should have been simple. I’d worked for days on my plan. I had gathered all the items I needed to make a sock-mace, shovel, and even a screwdriver. I’d managed to sneak out a guard’s uniform during my day job in the laundry room. I had even managed to dig a tunnel out of my cell and into the yard. I planned to use the morning roll-call as my escape time, all the guards would be there. I went through my hand-dug tunnel, out to the yard, approached the fence in my guards uniform (I looked great), and started to go to work. I was nearly there…so close, when I was spotted. Then it hit me, like a flash of light, I’d been shot! Damn…The watch towers. I’d forgotten about the bloody watch towers! I awoke in the prison infirmary three days later, stripped of all the items I had spent days acquiring and crafting. It was time to hatch a new plan..

No, no dear reader, you haven’t stumbled across the blog of a young offender, this is the GodisaGeek look at The Escapists, a top-down prison break indie developed by Mouldy Tooth Studios and published by Team17. You may have come across The Escapists already, thanks to its appearance sometime ago on the Steam early access program. Team17 have a thing for picking up indies and bringing them to the masses lately, and that is just what they are doing with The Escapists, as the title is now Xbox One bound, thanks to a sprinkle of Team17 tinkering. As you may have gathered from the start of the review, The Escapists sees you take the role of a prisoner with escape on his mind. Prison has just got too much for your little 16-bit friend, and it is high time he was leaving. On the surface, The Escapists looks simple, but scratch the surface and you will find a world of decisions, options and creative freedom. If you can think of a plan to get out of prison, chances are The Escapists contains the tools to let you live your dream. It may turn out to be a sucky plan, but at least you tried, right?

In prison there are four “currencies”: Your health, stamina, guards opinion of you and money, which can be earned by doing favours for your fellow inmates, or by doing menial work on a daily basis. Doing jobs for your inmate buddies usually amounts to beating someone up, stealing something from them or just generally being a nuisance when they tell you too. Working for your money, on the other hand, increases guard favour and earns you cash the safe – albeit slightly more time consuming – way. Money can be spent on items that the other prisoners are willing to sell. It’s rare that they will have items of any real use for escape plans, by they do have components that can be crafted into the more useful stuff. But how do you know what you can craft? Well, you’ll need to visit the library, or spend some time on the computer to find that stuff out. Or, you can pay to get a tip from an anonymous chap on the phone. Then there is always throwing three items into the craft menu and seeing what comes out of the other end, but this rarely works. All of this item-collecting and plan-creation takes time, as does building up your stamina, and putting up with the daily rigours of prison life. You’ll need to be at breakfast, lunch and dinner, evening and morning roll call, and be sure to work out in the gym on a regular basis if you want to stand much chance in a fight, something that will surely happen at some point. All of these options, choices and daily events make for a surprisingly deep and varied game, and you will need to be sharp as a knife if you are to succeed in getting out.

As you may have gathered, The Escapists is not easy. There are five prisons in which you can try your hand at escapology, the first of which, “Center Parks Minimum Security Prison”, took me 5 or 6 attempts to escape, with each attempt taking around 2 hours to prepare my escape plan. The lessons learned in Center Parks can be used later in the game, of course, but I’ll be surprised if the difficulty doesn’t put the less patient off fairly quickly. Luckily for me, I saw it as a challenge that wouldn’t beat me. I slept on the problem day after day, the infectious chip-tunes going round and round my head. I remembered one of the guards saying something about a store cupboard…(I’m not giving anything else away in this review!)

The SNES-era visuals and bouncy soundtrack hide a universe of complexity, decision making and intrigue. It has a charm that will ring true with gamers of a certain age, and for anyone who is up for the challenge. Yes, The Escapists is challenging, but it is also very rewarding, and something about those little sprites kept dragging me back for more. The chirpy dialogue, the faux anger of the guards and a million other little things amount to what is a great little indie title.

A lovely little game that looks far simpler than it is.

The Escapists 2 gets a new Multiplayer trailer

Break out of prison again with The Escapists 2