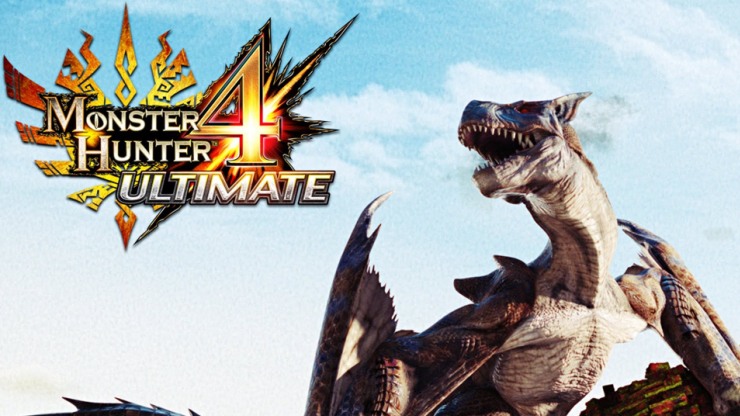 Coming hot on the heels of the ridiculous 130+ hours I managed to spend in the addictive, to-do-list sinkhole that is Fantasy Life, another epic beast-tussling, item-collecting marathon was probably the last thing I needed in my life. I would consider myself a Monster Hunter veteran, albeit one that was slightly – dare I say it – bored with the last handheld incarnation. Fiddly, tiny writing and menus, a funereal pace, lack of decent narrative structure: these were all criticisms I had with the last 3DS version. It was still a damn fine game, but just felt a bit of a schlep until you hit the real meat and drink a good few hours in. The first Fourth generation Monster Hunter title eschews this measured start completely. It is the first entry in the storied franchise that has been built from the ground up for Nintendo 3DS, so there are no linked elements to the Wii U version, and the absolute maximum juice has been squeezed out of the stereoscopic handheld. The introductory sequence is a mesmerising slice of action packed bombast and booming tunes. Once you have created your warrior from the array of body parts, facial hair and warpaint available, it throws you into a veritable maelstrom from the get go, with a wonderfully cinematic, Uncharted-esque boss battle set-piece its stirring opening gambit. Straight away you get a taste of what the game eventually becomes, of how investing your time will repay you with the thrill of the hunt, of mastering an arsenal of diverse weaponry and taking down enormous behemoths. It’s a blinding way of capturing your interest. The fact that Monster Hunter 4 Ultimate looks bloody marvellous helps, too. This is Capcom screaming out for those that may have avoided the series in the past to give it a whirl. Don’t get it twisted: this is still a hardcore experience that contains a brain-baffling amount of content, but it is set up far more intuitively than the last time you went at a Cephalos with a Gunlance.

There are in-depth tutorials for everything, or so it seems. Each weapon is explained in its own training session, something that is highly recommended for beginners. You will find yourself gravitating towards a favourite death-dealing instrument, but will need to master as many as possible to stand a chance against the full range of critters. Every piece of information you learn in tutorials or from conversations with NPCs is recorded in an easily accessible journal.

Never a series famed for a deep and rewarding storyline, you say? Not this time around. Your avatar – who you get to name yourself, but nothing naughty as it can be seen online – becomes part of the jolly old Big C Caravan. A motley gang of travelling folk which handily features a merchant, a cook, a blacksmith and a Guild Clerk, the Caravan lends narrative weight to why you are going out in the wilderness to slay monsters. You pick up early doors that there is more than meets the eye to the Caravan leader, who happens to have about his person a mysterious item that opens up a game-changing plot tangent later on. Why is a mysterious virus killing people? How can the Big C Caravan put a stop to it? Will you ever find that bloody Tigrex? The tone balances serious, weighty plot twists with a decent amount of humour. There is a lot of text to read, but you won’t feel yourself wanting to skip through it to get to the next dust-up.

The battles themselves are astonishing at times. Engineered for and best played in 3D-o-rama, the combat arenas are terraformed, diverse terrains that feature dips and hills, as well as plenty of inclines that you can climb upon and leap down to attack foes below you. It is immensely satisfying to pounce from on high, scything into some otherworldly monstrosity with your glaive. Then begins the mounting. Impromptu beast-riding of this type initiates a wild struggle which is interpreted in QTE form, rather like the horse-whispering elements of Red Dead Redemption, only with more wild stabbing. Don’t sleep though – you may be able to mount the buggers but your prey can use the environments to their advantage too, something you will discover early on when you realise that Jaggi you are desperate to polish off has the common sense to run away and hide. Other creatures will make use of their home turf to surround you or ambush you. Every time you step into the arena with one of the near-100-strong menagerie of enemies, you will need to use your brain, and no mistake. The rules will be familiar to vets, but perfectly reasonable to all: take down the mission within fifty minutes or it is a failure, and you get three lives with which to do it.

Speaking of lives, returning to the fray are Felynes – now known as Palico. These anthropomorphic moggies are fully customisable and are able to accompany you on missions and be upgraded with special abilities and attacks to assist you along your way. You can assemble a veritable Crazy Cat Lady-esque team of Palico that can be swapped via Streetpass with other Hunters. Weapons and attacks have been improved nicely. The Charge Blade and excellent Insect Glaive join the arsenal, and there are a substantial number of new moves for the mainstay weapons. The Insect Glaive is a tasty martial arts-style staff that harnesses the power of insects to extract stat-boosting power ups from your enemies. Minor tweaks make a world of difference, such as the way you can employ upswings to launch other Hunters into the air so that they can have a crack at attacking monsters from above – a very useful tool in co-op.

The single player campaign is absolutely enormous, the actual story-related sorties padded out with the myriad Guild quests you can pick up from the various NPCs and the other base camps that the Caravan reaches on your journey. There is much fun to be had with the accessible multiplayer elements. You can set up your own lobbies, known as Gathering Halls, even giving them their own special passcode for your mates to enter. Taking down targets with like-minded Hunters is a thrilling experience.

Monster Hunter 4 Ultimate is a superb entry in the often impenetrable series, which makes great use of its hardware, delivering enough new bells and whistles to appeal to old-timers, and a cracking sense of momentum and intrigue to draw newcomers in nicely. Bordering on home console in terms of pure grunt, it is a seriously impressive bit of work, a daring, winning combination of amusing plotlines and excellently methodical battle scenes. Highly recommended.

Gorgeous visuals
Excellent new weapons and attacks
Accessible to all, much improved plot

A more accessible adventure for newcomers this time around, but Monster Hunter Ultimate 4 still hasn't fully shaken off its outer armour.