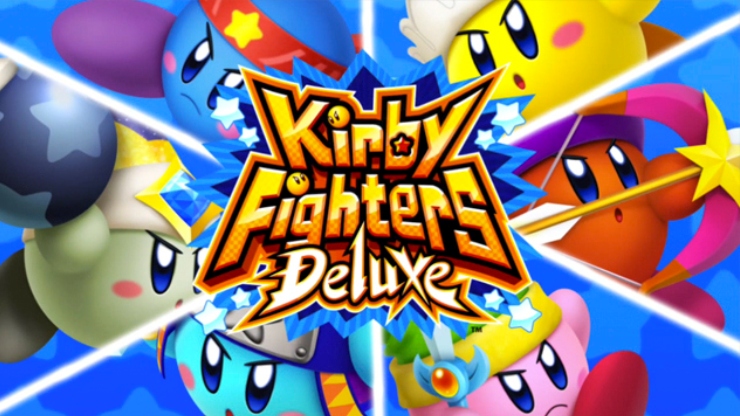 Kirby is the sweet, marshmallowy guilty pleasure of many a gamer. When he first appeared back in 1993, his cartoon world and copycat inhaling antics raised a smile with so many of us, and he easily became a fan favourite. The little pink sphere of fun has featured regularly in Nintendo’s line up since, and this latest addition to the catalogue attempts something different from the normal Kirby experience.

Kirby Fighters Deluxe takes a mini-game from the previous Triple Deluxe collection and makes it into its own separate game. It is in essence a simple multi-player platform fighter fleshed out with moves and characters from the well-known universe. The action is extremely close to the recent Super Smash Brothers, but energy bars replace knocking opponents out of the park. The pace is not as kinetic as Smash but still allows for four characters to be battling out on the same screen at once. As long as you want your four players to be round and cute and starting with a K.

There is a selection and a half at your battling fingertips. You have a choice of ten different Kirby that each have a specialist skill, including Sword, Parasol, Hammer, Bomb, Whip, Archer, Cutter, Beam, Fighter, and Ninja. Each has its own detailed costume and move set, and all have an unlockable additional costume when you complete the game with them. It gives an incentive for you to play through with all the characters available, especially if you’re a completionist and desire the full set.

The moves themselves are varied, with different characters allowing different tactics. Some, like the hammer, allow you to get up close and personal, while the whip allows you to hit enemies further away and keep your distance. It is relatively easy to start playing because you only use the shoulder button for block, and one button in conjunction with thumb stick takes care of all of the moves available for your character. The only other thing you will do is jump, which again has its own allocated button. Nine stages await you, with four difficulty levels, with a mid-level boss turning up for mischief before the finale at the end of level nine and the Big Boss. Button-mashers will cruise easily through the Easy and Normal skill levels, while those looking for a challenge should really start on Hard or even Very Hard. On some of the stages you will partner up with an NPC and go two on two, while on others it will be you against two protagonists. On these occasions, the game reaches frantic levels, and because everyone is Kirby, it can be tricky to tell each other apart without having to stop and focus. This happens very rarely though. Multiplayer is restricted to local play only, which is slightly baffling considering how great this would be online. Though, the game can be shared via download play, so not everyone needs a copy of the game in order to enjoy the fun.

It is almost becoming a cliché to mention how polished Nintendo games are and this is no exception. The graphics are simplistic as is required for the style of game, but extremely easy on the eye and a vivid imagination has gone into each stage. Some of the fans will recognise backgrounds from previous Kirby games. Some of the stages have hazards that require you to avoid them as well as your adversaries, such as massive hammers there to flatten you, or lava pits or even NPCs intent on interrupting your fighting fun. At several points the game spits out 8 bit versions of Kirby sprites to remind you of the previous history. Victory music is a tinny retro celebration that Kirby dances to in a delightful routine. All in all, it comes together in a little package of fondant joy that ticks several boxes and misses others by a country mile. The presentation is fantastic, for example, and the music is cutesy and fits the game well. The main and crucial element the game is missing is simply the challenge and stress that a fighting game needs to be enjoyable. There is no real sense at any point that you won’t cruise through the fight as long as you take your time and remember to block. I must have crashed through my first play in Easy mode in less than five minutes with a clean sheet of wins. When I ramped the difficultly up to Very Hard, it started to get going, but in all honesty I didn’t feel pushed in any way compared to the likes of Smash Brothers where everything seems to happen at one hundred miles an hour. It was almost like I was waiting for the challenge to kick in and there was no real draw for me to have that “one more go”. It was like eating those marshmallow flumps you used to get as a kid, but being made to eat the whole bag: the sugary, chewy delight eventually becomes a chore, as you realise there is no real variation and you wish you had bought the prawn cocktail crisps instead.

I’m also struggling to understand why the core Kirby Mechanic is missing from the game. Why do you start off with a specific power and not have the ability to inhale and change to different powers during the match? Why is there not a group of powers that everyone has to race to get to that you then battle for and the powers switch between players? It baffled me why the game took this route when a mechanic like that would have been an amazing variation on the normal fighting game.

If you’re looking for something to take up ten minutes of your time and you’re having one of those days where nothing is going your way then hop aboard the Kirby Fighting Deluxe train. If you are looking for a fighting game where you can “smash” the opposition, then other games are available, although I’m not giving you any clues as to what they are.

Lovely to look at
Easy to play
Great for casual play

Too easy
Becomes boring too quickly
Where is the online play?

Kirby, please stick to being cute and pink. I don’t want to fight with you.