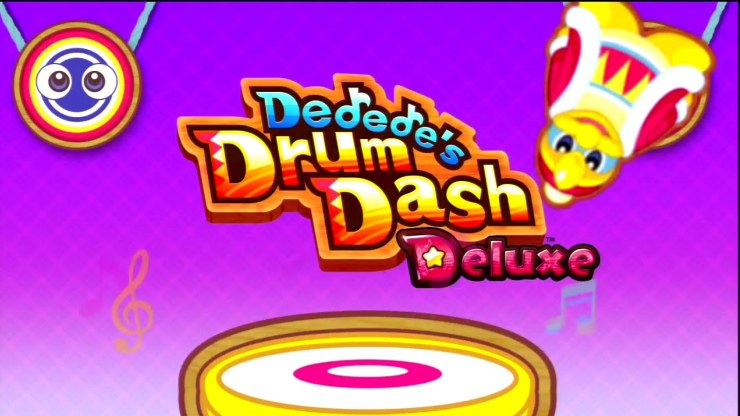 Dedede’s Drum Dash Deluxe originally came as a sub mini-game in Kirby: Triple Deluxe, and that’s exactly what it still is – a sub mini-game, and one that fails to capture the usual intricacy of most other Nintendo titles. In fact, I genuinely managed to complete the main six levels of Drum Dash Deluxe in less than half an hour. There is a degree of replayability for those who strive to get the highest scores and collect all the medals in games. There are also a few bonus levels and a further six “secret” levels (which are just harder versions of the original six), so game time can definitely be extended depending on how you play, but that’s still stretching it really thin. While the play time is more than suitable for a side activity attached to a full game, it’s certainly not enough for a stand-alone title. There are plenty more games out there that offer so much more than this for a lesser price.

The length, however, isn’t my main problem; the fact that it’s so incredibly boring is. I could cope with the lack of content if it left me hungry for more, but Drum Dash Deluxe leaves me pushing away my plate half-full. It literally only has one mechanic. Just one. You press the A button when King Dedede hits a drum, then fly into the air and collect coins while avoiding increasingly annoying enemies, then press A again at the apex of the jump to earn some extra points. That’s it. That’s all you do for the entirety of the game.

The fact that no additional changes to the mechanics occur makes it a drag after the first mission. Drum Dash Deluxe is crying out for some variety and depth to be added to the insanity-inducing jumping. But it doesn’t, and the game is basically just a pretty Flappy Bird as a result – something that would better suit being free on an app store than costing actual money.

There is no depth or variation when it comes to mission structure or game modes either, with the only activity available to the player being the same dash to the finish line. Nintendo games get so much love for a lot of reasons, one of them being the intricacy of even their comparatively simpler creations. I also often found obstacles in my path to be rather frustrating: on occasions they’d be in places that were practically impossible to avoid, so when I inevitably hit them I felt cheated by the game. I’m not asking for the game to have no challenge whatsoever – I actually found it more compelling once I reached the secret levels, as they were a lot harder and made the game more tense – but the feeling of being unfairly dealt with is one that tends to put me off games.

Despite all that, however, it can not be denied that Drum Dash Deluxe certainly has that patented “Nintendo charm”. The art style is lovely, with lots of colour and varying enemies at least keeping the eyes entertained for a while, and the singular mechanic, however uninspired it may be, does make the game flow well and it can feel satisfying when you hit a “super jump”, collect all the coins, and jump again with out messing up.

Dedede’s Drum Dash Deluxe’s main source of charm, however, comes from its vibrant and joyful sound track – which gives it a degree of personality that will, I imagine, make people enjoy it despite its flaws. A variety of tracks collect from past games featuring King Dedede, really capture the happy atmosphere of each stage.

Unfortunately, however, no amount of charm and cute aesthetic can deter from the fact that at its core Drum Dash Deluxe is a one-dimensional, one-trick mini-game, that’s being spread desperately thin with its own digital release.

Dedede’s Drum Dash Deluxe may be plentiful in Nintendo charm and character, but ultimately, the gameplay itself is one-note and over-stretched.