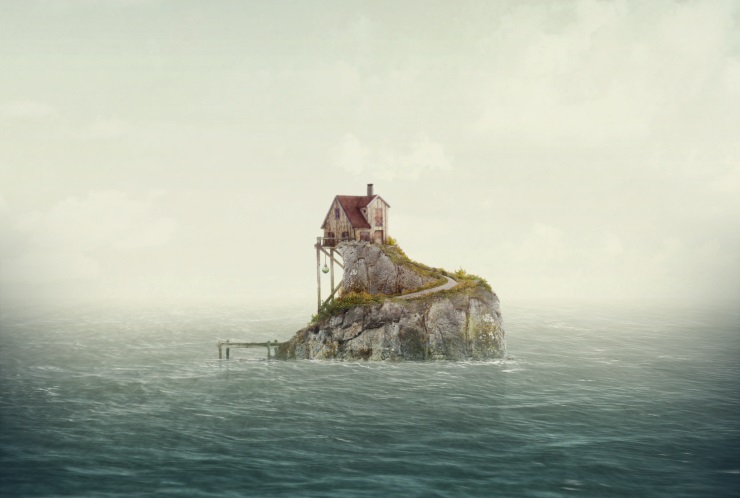 Throughout the last number of years, narrative-lead games have become far more common. Nowadays, there are myriad examples of titles that strip back mechanics to their bare-bones and focus on telling a specific story – though the results vary, of course. The Sailor’s Dream is a departure for Simogo; the studio that garnered quite the following with the excellent Year Walk and the even more sublime Device 6. This departure, however, presents its story in such a way that it feels too passive. It’s merely a fine, uninspiring story, with well delivered dialogue and art, but lacking that something that can truly engross those that are eager to set sail. With a simple swipe to the left or right, you can cast your eyes upon any of the environments that you are able to explore in The Sailor’s Dream. From the Secret Lighthouse to the Faraway Ruins, you can approach this tale in any order you would like. Each abandoned setting is explored by swiping up, down, left, or right, depending on the choices available to you at any one time. When leaving one of the wonderfully designed scenes, you’ll regularly travel along a dotted line with ambient noises subtly coming at you. After this, you’ll have the option to go to a number of different areas within the sea-surrounded place of interest, as depicted by a minimalistic screen with room names. The narrative comes to light by entering these rooms and swiping across a highlighted item, which will then reveal a passage of text.

The reason you can uncover the story as you desire is because The Sailor’s Dream doesn’t necessarily follow a simple pattern, as such. You will find yourself piecing things together as you go along, depending on which areas you decide to sift through, first. A character may be quoted in an earlier discovered passage, but introduced in one you find later. A second playthrough will allow you to appreciate certain elements a bit more, but even on the first time around, you’ll understand everything. To delve deep into this yarn would be to give too much away, but what I will say is that it left me underwhelmed. I’m sure there are those that will certainly feel warm and fuzzy inside as they uncover each beat, but there are definitely points where it falls a bit flat and I was left feeling disinterested.

While the story can be described as serviceable, there is an unquestionable class on show when it comes to the art and sound design. Simogo is excellent at creating an atmosphere that can unsettle you, relax you, or delight you. There’s a real whimsy about the scenes presented, with them emitting an almost magical aura. The audio quality is stunning in every regard. For instance, when exploring any of the environments in The Sailor’s Dream and swishing along the aforementioned dotted line, you’ll hear audio cues that give life to the exercise you’re partaking in. Music also plays a massive role here, with multiple songs revealing themselves to you on different occasions. With a range of acoustic instruments and a hypnotic, elegant singing voice, each melody (whether they be melancholic or upbeat) is absolutely beautiful. While sparse, there is also some dialogue that’s delivered in such a measured and understated fashion that fits the tone superbly. However, even with some delicate thought clearly put into the construction of the exquisite arrangements and believable oration, The Sailor’s Dream feels like it’s taking you on a journey in which your involvement is irrelevant. With a more compelling story, this may not be an issue, but with the miniscule level of interactivity here, it is. Areas will have objects that you can tap and a ping will be heard, as well as some things that can be pulled or dragged, but their inclusion adds little to the overall package. While The Sailor’s Dream employs one interesting design choice with regard to time, it’s mostly full of these minor distractions which will grab your attention for a second or two.

I applaud Simogo. Their creation is completely unlike their past works. Effectively, what are still images, are given some life due to the brilliantly executed sound design. And while the wistful compositions are a joy, The Sailor’s Dream ultimately lets itself down when asked to engage with you. You’re led by the hand through a narrative that’s merely functional. Some will heap praise on The Sailor’s Dream, while others will no doubt write it off from the word go, when really, this nautical tale has left shore but has a bit to go to reach its destination.

Some truly stunning songs and sound design, with a narrative that is only nice and lacking much interaction.