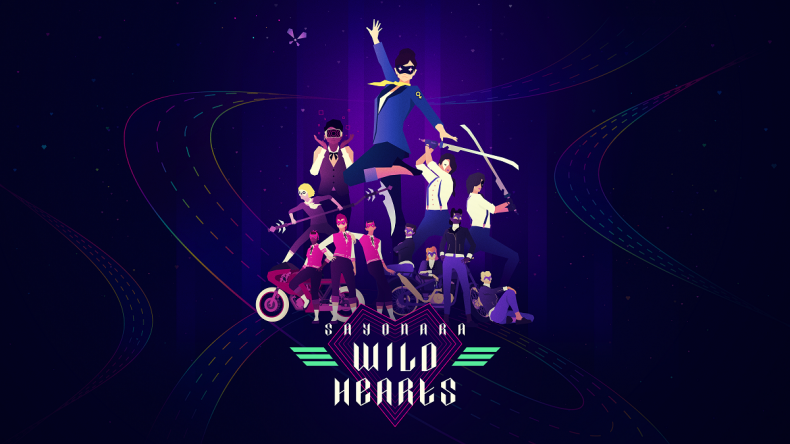 It’s difficult to explain what Sayonara Wild Hearts is. Fundamentally, it’s a rhythm game akin to Rez or Lost in Harmony coated in bold neon pink and dark blue environments, but the story is an interpretive journey through heartbreak that lets you make up your own mind as to what it all means. Developers Simogo and publishers Annapurna Interactive call it a “pop album video game,” combining illuminating visuals and a soundtrack that compliments the variety of gameplay on offer, and it’s a great example of how music and video games combine to provide unique works of art.

You play as a young woman who has her heart broken, and the short but sweet journey of how she overcomes her sadness takes place over different levels which see you travel through them in a multitude of ways which include riding a motorbike, driving a Cadillac, falling through tunnels of light and colour, and flying. You earn points by collecting gems and hearts, trying to ride through them as you move at great speed, eventually earning either a gold, silver, or bronze rank. Other elements of Sayonara Wild Hearts will have you firing a bow and arrow, using martial arts, shooting a gun attached to your bike at wolves and robots, and plenty more. Each level has plenty of changes from the last, and you can never really become familiar with them as they’re always changing. If you crash or fail to input a prompt on time, the screen will go black and you’ll have to restart from shortly before where you died, but it’s almost instant, so you don’t lose track of the rhythm and the song. When you get into the groove of the level it can be an amazing feeling, especially if the song that’s playing is particularly good.

There’re songs that stand out on their own, whilst others are more of a segue into the next. The electronic thumping and soothing synths often play without vocals, but the songs with lyrics are some of the game’s best. Not every piece of music stands out, but as an entire piece it compliments Sayonara Wild Hearts really well. There’s not a lot to learn in terms of the controls. You move with the left stick and hit the button prompts solely with the A button, allowing you to not get bogged down with a menagerie of complicated button sequences and instead opting for a more relaxed experience.

Trying to figure out what’s going on isn’t easy until you reach the incredibly structured final level. It’s not about trying to give you a compelling narrative, though. If you’ve ever had your heart broken you’ll ‘get’ it in one way or another, and the music builds on the themes of heartache, finding yourself, and overcoming it all beautifully. It’s utterly stunning how the bright design of each level works with both minimalism and simplistic gameplay. I was lost in it for the hour it lasts, unable to put it down. Some of the levels are far too short, and there are some sections that feel like they’re filling the gaps between some of the more adventurous levels. Among all the chaotic twists and turns of the forest and futuristic cityscapes you’ll encounter, simply falling through a neon tunnel collecting hearts feels a bit of a let down, and the tracks that accompany them are also weaker in bombast.

Sayonara Wild Hearts isn’t a long game, but its simple gameplay allows you to appreciate the music and visuals. Not only that, but the amount of gameplay styles on hand constantly mix it up and never allow you to get comfortable. There’re times when you’ll repeat certain sections, but it’s never overtly difficult. I’ve replayed my favourite level ‘Begin Again’ numerous times since I completed it, and can’t quite get enough of just how good it feels to race through the streets, listening to a beautiful voice sing a catchy chorus as I fly through a chasm of pink.

Catchy pop soundtrack
Some well-structured levels
Lovely use of colour

Sayonara Wild Hearts isn't particularly long, but the catchy pop score and variety of levels give you a decent challenge.