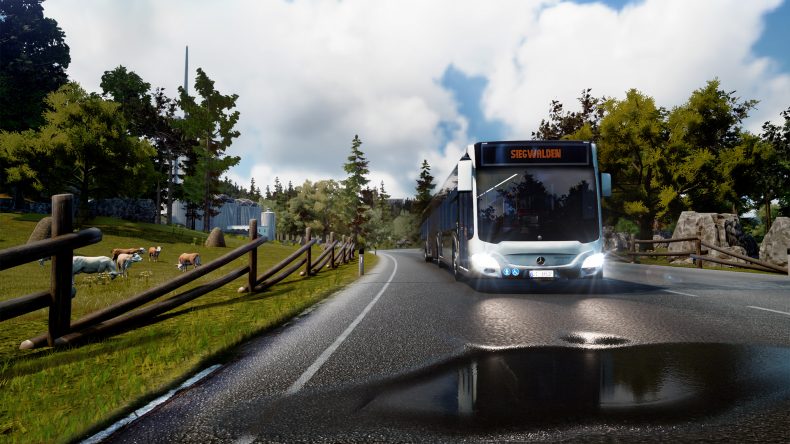 I travel on buses most days, to and from work. It’s not glamorous or anything, but I guess I’ve seen my fair share of the helplessness faced by bus drivers just trying to keep to a schedule, usually on those wet days when you’re soaked to the bone and everyone is in a foul mood. Bus Simulator does actually provide a little of that stress, albeit without the real consequences, when traffic stops you from getting to your destination on time.

Most of the time, especially with the amount of customisation on offer, Bus Simulator is thankfully a relaxing game. On consoles, where any four-wheeled driving usually consists of driving at 150mph+, it’s literally a nice change of pace to drive at around 40mph. I won’t pretend that you should expect the highest quality of visuals, or even the highest quality of gameplay, but there’s something oddly cathartic about doing a few runs of a bus route. Before you get to the driving, you’ll be setting up your own bus company and planning your first route. You’ll select a few stops and the GPS will put the rest together for you, even if the game doesn’t seem like it wants to make it that easy for you. The menus really are awkward, I never quite knew for sure what I was selecting as a result. This is compounded by the tutorial not teaching you nearly enough about the systems that run throughout the whole game, to the point that when it came to me having to create a “round trip” route, there was no such option in the game. It was named something completely different. I only discovered the real option through trial and error, as well as wasting time unsuccessfully testing whether I had found the correct option or not.

The whole of Bus Simulator feels like a budget title, from its inconsistent framerate (looking in your mirrors is like watching a slideshow) to the clones that routinely board your buses. Although there are some nice weather and lighting effects, most of the vehicles are basic in their representation, with only the buses really appearing with any kind of high quality. To its credit, they are modelled quite intricately, with many of the buttons on the dashboard actually working. You can use an in-game menu for all the functions within the vehicle too, such as the lights, extending/retracting the wheelchair ramp, even your hazard lights. Many of the essentials are mapped to specific buttons, like the left/right bumpers for indicating or the X button for opening your passenger doors, obviously to make your journeys that little bit less complicated. For the most part, at least. The thing is, despite the potentially complicated nature of the game, Bus Simulator is more-or-less only as in-depth as you want it to be. You can deal with taking payment and giving change for tickets, or you can let the game do it all for you so you can concentrate on the driving. There’s even an option to stop your company from going bankrupt, in case you just want to set up routes and not worry about the monetary side of things. If you do value your money, you’ll want to ensure that you’re driving properly, which means avoiding kerbs and potholes to provide the maximum comfort for passengers. This will level up bus stops and make you more cash.

Collisions will severely damage your income, for obvious reasons, but this also highlights one of the game’s biggest failings: the AI. No matter how carefully I drove my buses, the occasions that crashes did occur were always down to the AI accelerating away from a junction, only to change its mind for no reason and slam on the brakes. Not an isolated incident, as it happened on many an occasion and there’s just no predicting it. The worst accident, however, was the one that cost me almost an entire day’s takings: I hit a pedestrian. When driving, you really do have to use your mirrors and every other tool at your disposal, just like a real bus driver. Well, it is called Bus Simulator, after all. In the top corners of the screen (in first-person view) will be your side mirrors, which you’ll need to watch while taking tight corners. It’s easy to mount the kerb or even clip a street light when navigating the narrow junctions of the business park, and don’t even bother trying to use the third-person view as it’s next to useless.

Despite its many issues, Bus Simulator is still a surprisingly fun game to play. In a sedate sense, at least. There is a certain amount of relaxation involved in setting up routes, whether your own or ones dictated by your career objectives, and just driving along, picking up passengers. The customisation on offer means you can tailor the game to your specific tastes too, so simulation enthusiast can wring every drop of realism out of the experience. But if you’re like me and just want to relax sometimes, you can make it as simple as you want, and just enjoy the ride.

Does exactly what it says on the tin
Strangely relaxing

Framerate is inconsistent
Too many options left unexplained
Many AI bugs

Bus Simulator is a nice change of pace on consoles usually filled with 200mph racing games, providing a more sedate and relaxing experience for casual players and an in-depth simulation for enthusiasts.

Construction Simulator coming to PC and consoles this September