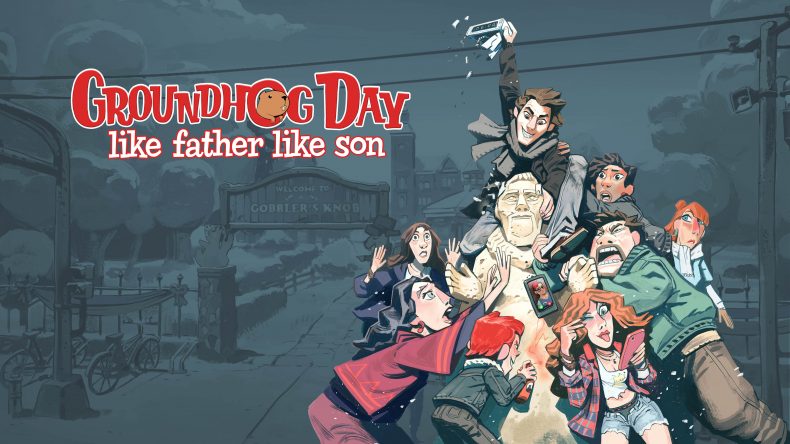 1993’s Groundhog Day is a dyed-in-the-wool classic: the story of Bill Murray’s cynical, down-in-the-mouth weatherman forced to relive the same day over and over again in the sleepy town of Puxatawney, Pennsylvania, for reasons never made entirely clear. During his time loop he ruminates on the idea that he is a God, that he’s technically immortal despite dying multiple times, and punches his irritating school friend on numerous occasions. It’s a bizarre mix of dark comedy and heartwarming drama, and you’ll be hard-pressed to find anyone who’s seen it and doesn’t harbour at least a guilty soft spot for it.

Twenty-six years later, a sequel has emerged almost completely out of nowhere, and to compound the head-scratching weirdness of it all, it’s not a movie, but a VR game. Yeah.

So in it you play Phil Connors Jnr, who succeeds his late father by also developing the same innate time-looping ability. Waking up on Groundhog Day 2019 on the day of an event to honour his father’s history with the town, it’s your job to guide Phil through a day that absolutely must go according to plan. The universe, of course, will try to stop you at every turn. From Phil’s niece driving her car through the garage wall and into the living, to the festival being cancelled and the entire event ground burning down, there are obstacles galore – not to mention Phil’s rocky relationship with this family, his distant girlfriend, and the editor of news vlog he reports for.

Movement around the various enclosed areas is achieved by teleportation to pre-determined points, where there’re usually several different things to interact with, some which help solve the immediate problem and some which are just for fun. Upstairs in Phil’s old childhood room, for example, you can sift through his old comics, strum his guitar or draw a comedy dick on his sketch pad, while downstairs you can cook a breakfast of bacon and eggs, toast, or a “zen smoothie” as your charming niece demands. From the moment you descend into the kitchen, the day begins to spiral into madness. The cat knocks over the fish bowl, your nephews break a window with an errant snowball, your brother and his daughter are screaming at one another over a booming heavy metal video on the TV. But here’s where the game begins, because task one is taking care of all these issues so Dana doesn’t drive the family car clean through the wall.

While later tasks will see you finding things to film at the event and avoiding a blazing disaster, among other things, this initial puzzle room prepares you for what’s to come. There’s an impressive number of things to interact with, from opening the fridge and grabbing ingredients to make breakfast, to opening the window to avoid a snowball-shaped disaster or throwing a mango at the cat to save the goldfish. Some problems have multiple solutions, but the crux of the matter is to achieve the primary goal – something which oddly stays recorded in the Notes section on Phil’s tablet. Time is finite in all situations, felt most keenly when eating a suspect muffin at the event gets Phil high, or when you know the clock is ticking swiftly down on your niece smashing her face into the dashboard of her father’s truck. I’m not particularly dexterous when it comes to VR games, and I struggled with some of the more intricate actions. Items you can interact with glow yellow, and a few of the options surprised me, such as smashing up the alarm clock when it play I Got You, Babe for the 12th morning in a row, or giving a Phil a case of blanket tent while eyeing up his girly mag (there’s a Trophy for both, by the way).

I’ve always found VR to be a little unsettling when you have to interact with approximations of humans, and Groundhog Day: Like Father Like Son is no exception. The character models are oversized and cartoonish, but only a few grotesque blemishes away from the Giesha’s guests in Little Nightmares. The environments aren’t bad though, and there’s plenty to see and do within them.

The writing, however, is a little hit and miss. Though there are a few sentimental flashbacks to bonding time between Phil’s Junior and Senior, the majority of the script is our Phil mumbling sarcastic asides in a bored and disinterested tone. They’ve attempted to capture some Bill Murray magic without the man himself and it doesn’t work. There are a few chuckleworthy moments, and overall the interpersonal drama is acted well enough, but it’s not all that memorable. Also (though I admit it’s hard to tell if the issue was with my Move controllers), I did find it difficult to make certain objects trigger properly, especially when trying to cook the breakfast or draw the aforementioned dick pic. That being said, most of it did work eventually with a bit of patience and trial & error, which let’s face it, is kind of what this game is all about.

Perhaps the best thing about it all is that it’s refreshing to play a VR game that isn’t focused on shooting, driving or flying, and instead asks you to invest in a world and a cast of characters that all need your help or agency at some point or another. Occasional sudden shocks pepper the relatively short runtime, but the atmosphere and interactions help keep you grounded in this world. It’s an enjoyable enough adventure that isn’t quite aware of how obnoxious some of its writing is, but which mostly makes up for that with a mix of decent puzzles and fun VR busywork.

Lots to do
Has a few laughs
Puzzles are interesting

Like Father, Like Son is an interesting VR experience that mostly succeeds despite lacking the charm of the source material

RiME re-revealed as a multiplatform game