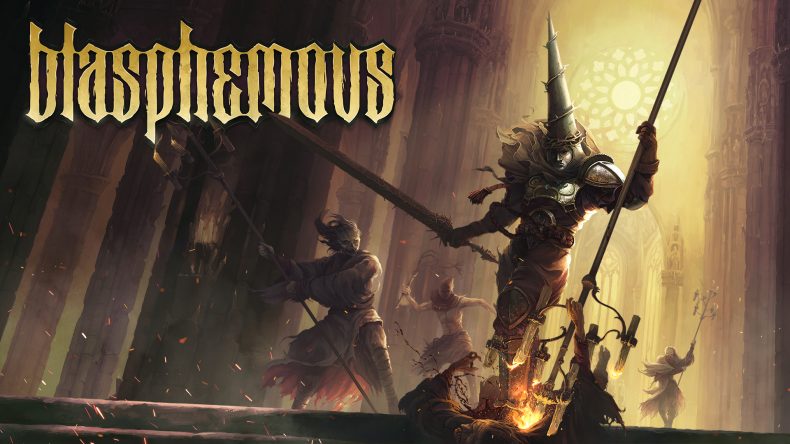 The silent protagonist of Blasphemous is known as The Penitent One, and the best way to picture him is to imagine a combination of Dan Aykroyd’s head from the movie Coneheads with a dash of Robocop, all nicely wrapped up in a bow of barb wire to get in the festive mood. The Penitent One’s mission is to fix a world full of religious guilt, and you will meet a variety of characters who all have certain tasks for you to achieve. The dialogue for the entirety of the game is delivered in a very similar fashion to the Souls games or Bloodborne. It is all very mysterious and vague, but that’s something that I’ve grown to love in videogames; it keeps every character you meet unique and makes you want to deliver whatever it is they need.

The opening 15 minutes of Blasphemous completely pulled me in with its phenomenal 2D art style. Aesthetically, The Game Kitchen has found a way to take us right back to the era of 90’s PC games, and this shines in pretty much every cutscene within Blasphemous. For such a dark and moody world, there is so much colour, and the majority is delivered through violence – and my word, is this game violent. Within the first 15 minutes it threw me into a boss fight that led to a very bloody but incredible cutscene. This is a game that took me around 18 hours to finish, and yet I still had so much to discover after that. Blasphemous, from the get-go, isn’t joking around. You have one weapon throughout your time in Blasphemous, a sword known as “Mea Culpa”. As you navigate your way through the world, Mea Culpa will cut straight through the hearts and heads of many enemies, but also help you navigate your way up to those hard to reach areas by stabbing the sword directly into the walls. It is always a risky move to have just one weapon in a game like this, but as you progress and slaughter dozens of enemies – who all have their own unique movesets to learn – the game rewards you with over the top executions that just never get old. From these you’ll earn Tears of Atonement, which is currency that allows you to upgrade your sword and unlock new skills. However, like the Souls games, if you die (and you will die… loads) it does not take long for the game to punish you.

With every death, you leave behind Guilt fragments, and you’ll have to choose to either return back to the area where you met your end or find statues to rid you of your guilt. If you don’t, you’ll receive fewer Tears of Atonement and have your stamina bar – which allows you to perform special techniques – cut shorter and shorter each time. Trust me, you won’t want that during a boss fight. Each boss is incredibly memorable and disturbing in their design. I found that every one was a challenge, but what I truly appreciated was the fact that it does not take dozens of attempts to achieve victory. They’re not as difficult as Soulsborne bosses, but there is still an element of pattern recognition, and once you get that down, Blasphemous delivers exciting fights and that incredible adrenaline rush of victory. However, I did end up getting quite frustrated on a few occasions. The gameplay is extremely tight and there is no denying that everything feels very responsive, but on numerous occasions when I was surrounded and attacked by a few enemies at once it started to get a bit irritating. With every hit, you get bounced back and knocked to the ground, and when you are trying to get back on your feet you leave yourself open to another attack from the same enemy, which could now result in an instant death if you’re knocked back and impaled on a carpet of spikes. It just felt as though I couldn’t get out of the enemy’s line of attack fast enough at times. Blasphemous also lets you take whatever route you desire through the majority of the game, but there were one or two occasions when I got lost. I did feel that the map was quite hard to read and it really could have done with a zoom-in feature, especially when playing in handheld mode on the Switch.

There are dozens of collectables tucked away in all different corners of the world and they are really worth your time tracking down, especially if you’re vibing the tone and atmosphere. Each collectable comes with its own lore that will tell you about certain characters’ situations within the world of Blasphemous, and I don’t mean a few words; quite a few of them are full-page dialogues and, given the narrative language used, set the tone even more. You can also collect perks for better vitality and defence and add them to the set of Rosary Beads the Penitent One carries. Finally, it has to be said that Carlos Viola has created one of the best scores of 2019. It is pretty flawless for the game. It is moody, atmospheric and just pure brilliant. The musical cues, especially for the boss fights, are utterly superb. Blasphemous is a fantastic game that everyone should absolutely play, and a package crammed full of content given its asking price. It gets so much right, but also creates its own identity with its stellar art style, tight gameplay and platforming, and unique cast of characters, all topped off with ultra-violent combat and a moody, gothic horror atmosphere.

Repent, sinner, and give Blasphemous a try.

Blasphemous gets so much right, but also creates its own identity with its stellar art style, tight gameplay and platforming, and unique cast of characters