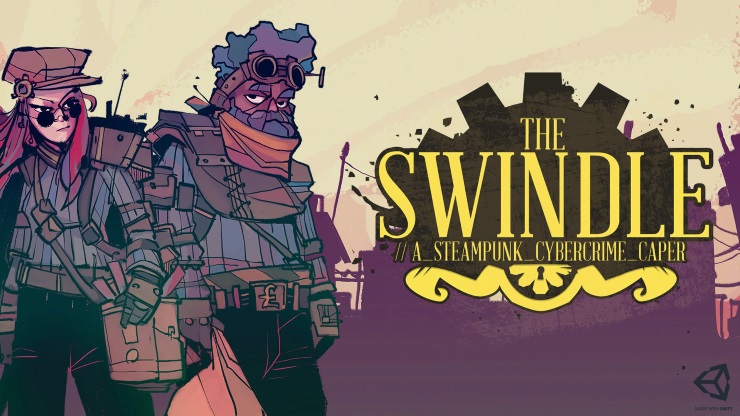 Big budget stealth titles, as a general rule, are about patience. The Hitmans (not Hitmen) and Splinter Cells of the world might give you the option to go balls-out crazy now and then, but the overall focus is usually silence. Stealth Inc. went the other way, requiring precision and timing but skewing the established rules of the genre by adding a feverishly addictive leaderboard system. Curve Digital are back again, this time presenting a game that’s less about rushing and more about patience, but is equally as challenging as its predecessor, if not more so.

The Swindle is a 2D platformer, when you boil it down, about breaking into buildings and stealing all the cash without getting caught. If you do get caught, you can usually still get out – it’s just much harder. It’s great fun, wholly addictive, yet undeniably mean-spirited. Set in a retro-futuristic, steampunk version of Victorian London, the Swindle sees your gang of notorious cat burglars threatened by Scotland Yard’s powerful new surveillance system, the Devil’s Basilisk (I know, right?). You have 100 days until it fires and renders your nefarious nighttime capers impossible, giving you 100 days to steal enough money to set yourself up for the greatest swindle of your career: stealing the Basilisk itself. I say “gang”, because every time one of your thieves is caught or killed they are replaced immediately by another one, but it’s not really clear who they are or where they come from. They all have a randomly-generated name and appearance, but The Swindle isn’t big on exposition or story.

In fact, the few lines of text at the beginning are all you get. You start in an airship, drop to Earth in a little pod, get your sticky fingers on, then escape in said pod when you’re done. And you do this over and over until you have enough money to upgrade your thieves. Abilities and power-ups are universal to your crew, so if you buy an upgrade for one thief it applies to every subsequent character. In that respect, The Swindle isn’t really a “Roguelike”. Death or failure will result in you having to use a different thief, but they’re all the same, and every level is procedurally generated anyway. What’s mean-spirited about it is that it throws obstacles at you with no discernible pattern whatsoever. For example: one level might see you faced with a few patrolling guards and a floating camera. You scale the outside wall, smash a window, knock out the guard, destroy the camera, hack the computer and escape. Easy peasy. The very next level might present the exact same enemies and loot, but put them in odd places. If you get seen by a guard (whose line of sight is handily signposted by a massive yellow beam), the lights all go red, a siren goes off and you’ve only got a few seconds to get the hell out before the police show up. If the only way up a building is over a window, and the level generator has dropped a guard behind the glass on a platform that’s only a single tile wide, you’re going to have less than a second to jump up the window when his back is turned. If the controls were precise and responsive it might not be a problem. Sadly, they’re not, and one mistake can be enough to ruin or end an entire heist. Sometimes doors don’t open if you’ve just closed them, forcing you to step back and forward again first, which costs valuable time. Sometimes your thief will stick to a wall and slide down it, while sometimes they’ll fail to do so and fall to their deaths.

It’s not merely a question of getting good either. You just don’t know what’s coming, and after every heist the difficulty increases and new stuff is thrown at you with no explanation of how to get round it. Little cute robots that explode, brutish guards that have to be hit three times before they sleep, mines that have to be hacked. Sometimes you might enter a heist and have no way to get into the building without setting off an alarm; early on, when you first unlock the second area, you may not be able to even enter a building because you didn’t realise there would be locked doors that you need a special ability to bypass. Given that most upgrades are hugely expensive (a few are £5000, and they become astronomical pretty quick) and you will struggle to earn more than £600 – £1200 in the first few heists after you’ve unlocked hacking (which takes at least one heist), you may find it tricky to progress early on.

At times, it seems that The Swindle assumes you already know how to play it. It assumes you’ve examined the skill tree and know what you’re saving for. It’s probably deliberate, as the keys to a successful robbery are preparation and planning (or so I’ve heard), but it’s still initially infuriating – especially as early levels contain areas you can’t reach without skills you don’t have yet, computers to hack when you can’t possibly have unlocked hacking. It’s irritating, as you can’t go back due to the random level generator and clean up what you miss. You can’t learn anything, which kind of puts paid to the theory that you should be prepared for any eventuality. You can’t be. You go into every heist utterly blind, so there’s no wonder you fail so often.

The busy (admittedly very stylish) aesthetic makes it hard to see what’s happening sometimes, and it’s easy to get smacked by a guard if you’re not lightning-fast enough with your cosh. The double-jump doesn’t always register. These are all minor things that wouldn’t matter so much if your success didn’t depend so heavily on reflexes, timing and precision. Every new heist knocks a day off your 100-day limit, too, and it’s remarkably easy to waste them in quick succession. But the art style is wonderful and the tick-tock music creates a sense of tension that puts you immediately on edge. It’s just a shame that The Swindle doesn’t quite have the nuanced gameplay to pull off what it’s aiming for, and instead leaves us with a game that’s fun and different, but slightly undercooked.

A stylish new take on the indie stealth genre, The Swindle doesn't have the chops to compete with the very best, but manages to be addictive and likable enough to succeed on its own merit.