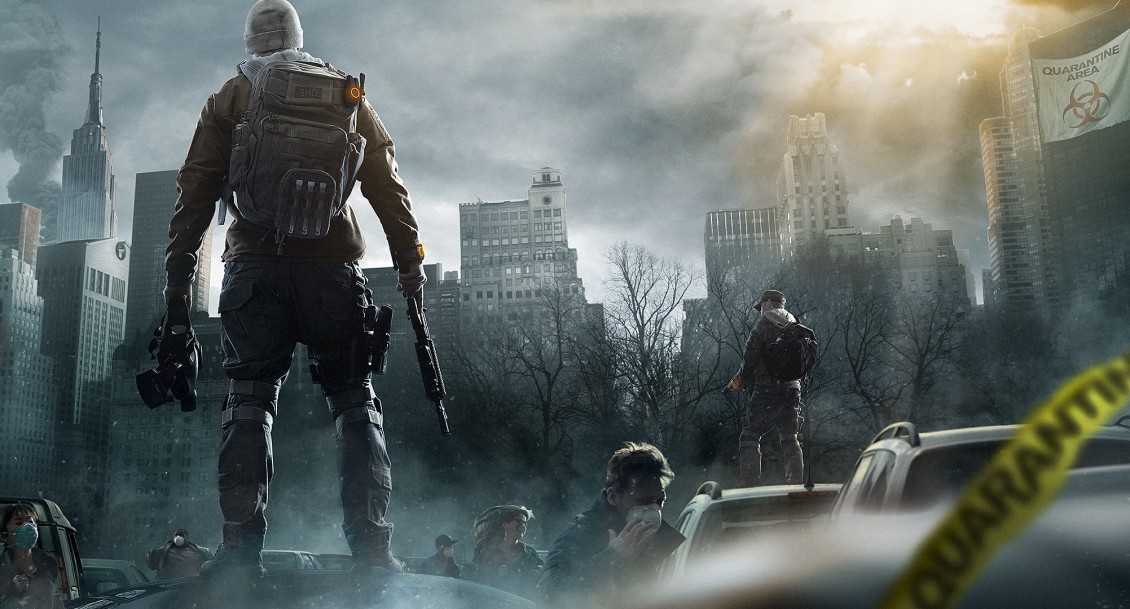 The initial premise of The Division is a genuinely frightening one: a strain of weaponised smallpox sprayed on US Dollar bills and distributed around America has lead to an unstoppable epidemic that has decimated one of the greatest nations in the world. Out of the remnants, the so-called Division has risen, a collection of sleeper agents activated by the sudden crisis and tasked with restoring order and defending what’s left of the United States from an army of rioters, criminals, vigilantes, and fanatics.

It’s an exciting concept; usually such a conceit is reserved for zombie stories, so to a see a modern military spin on it feels novel. You’re not facing off against the undead, you’re dealing with the scum of the Earth, morally bankrupt looters and opportunists using the catastrophe for their own gain. As a result, killing them in their scores is hugely satisfying, even if the RPG mechanics mean the combat sometimes lacks the instant gratification of a standard shooter.

There’s something intoxicating about The Division’s hollowed-out, gutted NYC that you’ll feel right after you arrive. Fires burn unchecked in the streets, litter races the crows through the smoky air, smashed neon signs pop and fizz with the last vestiges of life, and those innocent civilians who remain are cowed and frightened, huddling together for warmth and begging you for water as you pass.

And who wouldn’t? In a world of dirt-smeared faces, broken dreams, burning stars and decaying stripes your Division agent is a veritable knight in shining armour. Strapped with hi-tech weaponry, kevlar vests, gadgets and provisions, each agent is an army of one with the backing and experience to turn the tide of any encounter – and that’s what The Division is all about, and why it feels so effortlessly cool to play. Destiny has its share of complaints because the shared world nature takes away the individual’s sense of power and purpose; you feel like everything you’ve done, someone else already has – or currently is doing, all over your turf. The Division changes that by instancing so much of its content. You won’t come across ten other players in a given area farming your enemies on a constant loop; you won’t have to team up for the same six-man raid over and over and over again until the experience has lost all meaning. There’s a dynamism to it that comes from the random nature of Encounter events, side-quests and, well, just getting involved. As time goes on the edges may fray to reveal a grind-fest beneath, but as it stands it doesn’t feel that way. There’s always something to do.

In its campaign missions, The Division presents a structure that works perfectly well whether playing alone or with others. You’re not encouraged to do either, the choice is yours from the off, whether you’re simply roaming the streets or tackling a campaign or side mission. There’s a decent variety of objectives, from interrupting arms deals to activating contamination scanners in abandoned tenements, but even the first few campaign missions are meaty, exciting forays into New York’s fiery underbelly to rescue a handful of ViPs who can help turn your fledgling hideout into a fully-functioning forward operating base. It’s a trend that continues, too, as you team up or go it alone to improve your base and push for ground in the battlefields of Manhattan.

Being an RPG first and a shooter second, The Division’s firefights take some getting used to. Headshots do more damage but don’t guarantee an insta-kill. Early guns are inaccurate and weak, which is always a bit weird – a bullet is a bullet, right? But you soon get used to it as the cover-to-cover mechanic is so slick and precise, and the gunplay itself is just so much fun. Those going in expecting to be pulling off insta-kill headshots right away may find the more cerebral approach to combat off-putting, as damage is dictated by hidden numbers that are crunched behind the scenes and then blasted out in colourful little displays with every bullet that lands. It’s also a deeper experience than you might expect, and once you start digging into its various systems there’s a warren of side-concerns and distractions to boggle your mind. Skills are split into three categories: Security, Medical, and Technical, which can be translated into standard RPG jargon as strength, health and intelligence, respectively. You need to upgrade each wing to unlock perks and talents associated with each, and you need to complete corresponding colour-coded missions to earn enough supplies to do so. It’s a simple structure that presents a solid reason to mix it up and vary your approach. As you go you’ll unlock various skills like a ballistic shield, a deployable turret and a sticky bomb, while perks govern your cooldowns, curatives and combat effectiveness. The trees are solid, and combine with the crafting element to create a diverse and expansive progression system. The menus themselves can be a little fiddly, and there’s vital information hidden in sub-menus or buried under piles of unhelpful stats that aren’t clearly explained. Eventually it comes together, and by the time you hit level ten or thereabouts you should have a decent grasp of The Division’s numerous systems.

Reaching tenth level is something of a milestone, too, as that’s when the Dark Zone initially becomes survivable. You can avoid this area completely if you choose, but to do so would be to miss out on one of the cleverest and edgiest multiplayer elements of recent years. Essentially, the Dark Zone is like the rest of Manhattan; the only real difference is that it’s still highly contaminated by the Dollar Flu and the JTF don’t go there. As a result, it has become lawless in the extreme, and even Division Agents can turn on each other without fear of reprimand.

In real terms, that means the area is PvP-enabled. You can choose to help or harm other agents, although the latter will mark you with a tasty bounty to encourage other players to bring you to heel. So why bother, right? Why not all just play nicely? Well, because the Dark Zone is home to the best loot in the game, particularly at higher levels, that’s why. The only problem is that before you can use any Dark Zone loot on the outside, you must extract it and decontaminate it first. Players carrying yellow packages under their backpacks are loaded, although no one else can tell what quality the loot itself is. The gamble is whether or not to turn on them and steal it in the hopes that it’s worth the trouble, and the bounty.

The objective in the DZ is simple: kill the enemies (all of which are Veteran or Elite), loot them, reach an extraction point and survive long enough to get your scavenged gear out. These zones are highly dangerous, as a common strategy is to set up an ambush here and kill unsuspecting players right before their chopper arrives. There are good guys and bad guys, of course, but you’ll rarely know which is which until the bullets start to fly. It makes for an incredibly tense experience, one that becomes borderline unbearable if you’re lucky enough to snag a purple or orange item. The Dark Zone is such a thrilling, dynamic playground that it makes returning to the PvE map seem positively sedate.

Minor bugs get in the way, which is perhaps to be expected with a game so large and complex. My agent occasionally ends up silhouetted on the Appearance screen, which is annoying, and the matchmaking needs tightening. Several times I’ve been matched to groups on the other side of the map to the mission I was trying to find a group for, only for them to drop out and force me to run all the way back. Actually that’s another issue, too: there’s so much running. No matter how many safe-houses you unlock, the fast travel will only take you so far, and then it’s Hobson’s Choice the rest of the way. After a while it does become tiring to hear the same dialogue from pedestrians, run into the same gang of goons, sprint and mantle through the same shortcuts. It’s not a huge problem, but it certainly detracts from the fun.

Massive, clever and addictive, The Division is Ubisoft at their best. It’s an immersive, tense experience that gets better and better with every hour you put in, whether you’re playing with friends or going it alone, digging through the campaign to unearth the secrets behind the virus or trying to survive the terrifying Dark Zone. It’s not without its issues, but the majority are teething problems that could be easily patched out in future (and if they do, we’ll update our score accordingly). As it stands, it’s certainly one of the most promising new IPs of this generation so far.

Read our eight beginner’s tips to playing The Division.

So much to do.
The Dark Zone is exceptional.
Immersive, atmospheric world.

One of the most promising new IPs of this generation so far. Massive, clever and addictive, The Division is Ubisoft at their best.