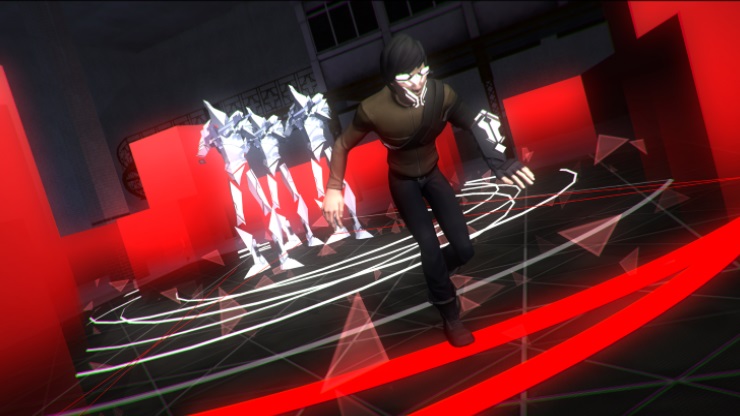 There’s no shame in displaying inspiration openly, and that’s a good thing, as Volume’s Metal Gear inspiration is clear from the get-go – and not just because Hideo Kojima is the first person thanked in the credits. No, it’s even down to the way Rob Locksley creeps around the virtual reality levels: hunched over in a position that would absolutely wreck most people’s backs, Rob has to sneak around collecting gems and avoiding guards (here called pawns), before escaping via the end-of-level marker.

In concept, it’s actually fairly simple. But it’s so well executed here. The levels themselves start straightforwardly enough, but quickly present tricky puzzles that at first seem almost impossible, before that wonderful moment of realisation dawns on you, and the solution becomes clear. Multiple moments will have you audibly moaning as you overcome your own inability to initially see things differently. One such moment for me was understanding the first tool at your disposal, the bugle item that you can bounce off walls and activate to distract pawns from their station. Sure, it’s essentially a noisemaker, and thus nothing new, but the way it works in tandem with the level design is quite something. Understanding that your standard whistle distraction won’t do the trick due to the geometry of the level, it becomes clear you need to bounce the bugle around so that it goes off behind the guards, allowing you to follow them, and thus get around them without raising the alarms.

In other cases, getting past a pawn might only be the first stage of a two-part idea. Gems are hiding behind it, but getting them results in a dead end, and now they’re coming back. Planning does help, but sometimes quick thinking and cold hard panic can save the day. It’s really an open sandbox type of game, a cross between top-down stealth and a puzzle that needs to be solved.

The tension in these small, enclosed levels is rather well done. If you alert a pawn there will be a blast of orchestral music that never ceases to make you jump out of your skin. You can still evade enemies (there’s another Metal Gear similarity), but that’s not the point – you’ll want to hit start and go again. You’ll want to get that perfect run, and try to climb the leaderboards, and that’s the mark of a well-made game. It’s nice to look at, and it feels designed so as to not to take your eyes from the gameplay too much. But it does have its own style and uses a larger colour palette than plenty of other titles. The bright reds and oranges contrast nicely with the blues and purples, meaning you’re never bored with what you’re looking at. To go with the burst of audio that celebrates your failure to stay hidden, there’s a very serious sounding soundtrack, which feels ever-so-slightly out of place. The voice cast does a good job, and although Danny Wallace steals the show as the weird AI (it’s hard not to laugh at his Otacon impression), YouTuber Charlie McDonnell does an okay job as Locksley, but it really goes to show how few normal-sounding people are used in videogames these days. At first it appears jarring (similarly to Everybody’s Gone to the Rapture), but you get used to it in the end. Andy Serkis does a fine job as Gisborne, and Jim Sterling even appears, sounding…well, like Jim Sterling.

Almost in contrast to the speedy, quickfire levels, the story is doled out now and again as you play. The Robin Hood theme is strong, as Locksley is live-streaming his VR-related antics in order to show the downtrodden British public how they can steal from the rich without resorting to violence. It’s all quite meta, with Gisborne Industries playing the part of the all-powerful corporation. It’s well written, but a little hard to follow on first playthrough because each piece of dialogue will be interrupted if you are spotted by a guard. This means if you’re struggling on a particular level (there’s an enemy with a huge vision cone that I almost always had trouble with) you might hear repeated dialogue until you either stop failing, or just sit for a few minutes and let it play out. In a game that is all about getting the best times, that’s a problem.

So it’s on your second attempt that you’ll go for a better time, and it’s here that I worry for the game a little. The sandbox nature means that you really can attack each level however you want, but there’s no real penalty for being spotted. You’d assume that being stealthy and not getting spotted would result in a quicker time, but I’m not wholly convinced that’s the case. Due to checkpoints being all over the map, you can grab the gems you need to collect, get spotted, and run to a checkpoint. You’ll die, of course, but you’ll respawn at the checkpoint with the gems still collected, the enemies respawn to their original point, and you don’t lose time, as that also resets to the checkpointed time. It’s not something you’ll always do on every level, but when you do, it feels like you’re gaming the system. It’s a misstep that means there’s little reason to play stealthily on certain levels because there’s little punishment for doing the alternative, which also removes some of the difficulty. After the halfway point it becomes a little harder to manage (and the final few levels are some of the trickiest, as you’d expect), though that still leaves a large part of the game that’s rendered too easy.

But Volume is a fun, highly replayable, very moreish game (thanks to the easy to use level creation tools, and online level curation) and has had a lot of thought put into it. There are a hundred included levels of varying difficulty, and new mechanics, tools, and enemies are generously rolled out through the campaign. It feels like a love letter to Hideo Kojima in many ways, but not one that’s derivative, instead focusing on telling its own take on a futuristic, dystopian Robin Hood story. Whether you gel with the narrative will be entirely down to personal taste (it was a little too meta for me sometimes, with talk of unfollowing) but it won’t change the fact that this is a mostly well-designed, methodically thought-out puzzler that ends up being too easy at times due to checkpoint issues.

Story gets in the way at times.
Checkpoint issues are very strange.
Probably too easy for stealth-genre fans.

A mostly well designed, methodically thought out puzzler that ends up being too easy due to early checkpoint issues.

Original Soundtrack For Volume By David Housden To Be Released