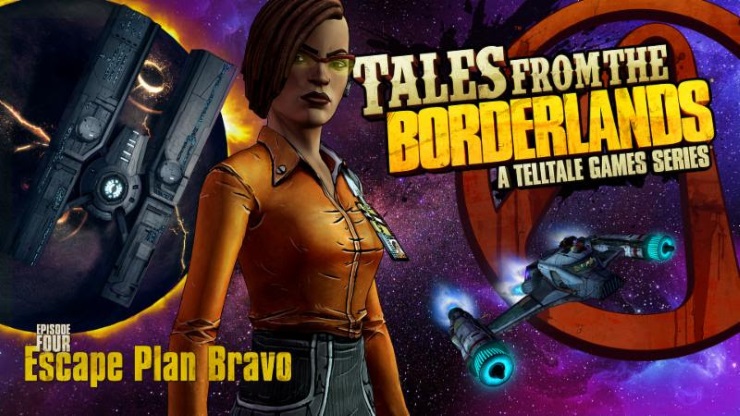 As is always the case, Telltale’s games are heavily focused on story. As such, this review assumes you’ve played the first two episodes, but won’t spoil from this new one.

Where the first three episodes of Telltale’s brilliant take on the Borderlands universe brought us laughs galore, episode four focuses more on storytelling, losing a little of the magic along the way. In fact, Escape Plan Bravo is very light on laughs, and heavy on progression. By the time the credits roll, you’ll have a good idea of what to expect from the finale, though you may wonder why the writers took the decision to move away from the belly laughs, and towards emotionally moving scenes.

That’s not to say it’s completely dry or bereft of mirth, because the regular late-title returns (it’s as if they are competing with themselves to see just how late it can come) and is superb. There’re some great laughs in that scene, but elsewhere it’s strange to see it attempt to suddenly go super serious. Don’t get me wrong, I’m not against that kind of thing, but it’s a little jarring going in expecting over-the-top, ludicrous scenes, and being treated to, at times, a more gruesome, grim setting, as well as scenes which are literally characters discussing their feelings for one another – and not in a comedic way. There are even instances where I thought I could see the punchline coming, only to realise it wasn’t coming, and it was a sincere moment. But things aren’t going well for Rhys and Fiona; now under the command of a rocket-launcher-wielding mad-woman, and as was hinted at during the close of episode three, it’s time to head to Hyperion. Much of the episode is spent there in search of the final Gortys piece, switching between characters. There are a few fantastic scenes (one for each lead character, actually), and a stronger focus on Rhys this time, whereas Fiona (and Sasha) have felt like the pivotal part of the story previously. In fact, the best scene on Hyperion features Telltale almost taking the piss out of itself, and the plethora of quick-time events that its games have.

Escape Plan Bravo features a lot more Handsome Jack, and like everyone else on the cast, Dameon Clarke excels. Troy Baker’s Rhys is great, but – and I feel like a broken record at this point – Laura Bailey as Fiona is still the best the game has to offer. The voice just fits the role perfectly. Her facial animations continue to be a joy, and that’s a credit to the art team. The soundtrack is top notch, too, with that late title sequence including another killer track that just fits. It feels churlish to moan about story progression in a genre that is all about story, but where, before, Telltale showed a complete understanding and command of the source material, here it falls a little flat. But for all the complaints, it’s still nice to be back in Telltale’s Borderlands. There are some fairly heavy scenes here, and a choice at the close that feels massive, that will make you want to replay the episode to see what happens if you choose otherwise.

Without question, Tales is a superb series, but episode four drops slightly below the level of quality of the previous three episodes, which admittedly set the bar very high. Heavy on story progression, but very light on laughs, there’s plenty of setup for what could be a truly special finale. Let’s hope it brings the yucks again for episode five, and gets the tone right again.

Where the previous three episodes set the scene with laughs galore, episode four focuses more on setting up a finale, and loses some of the magic in doing so.