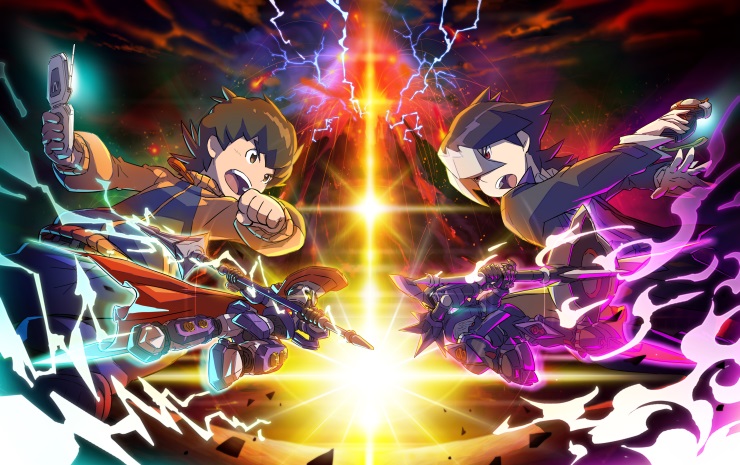 One day, man created robots, little ones, and lots of them. Kids played happily with these tiny toys, using them to engage in battles with others as they slashed at them with small swords and fired little guns at each other. After time, and some injuries, they were deemed to be too dangerous and were banned as a result. Then one day, another man came along, his invention paved the way for the resurrection of these toys, and once again battles raged. That invention… Fortified Cardboard.

This is the world of LBX: Little Battlers eXperience, where people think it’s a good idea to give kids access to tiny guns and swords and for something as mundane-sounding as ‘Fortified Cardboard’ to save the day. The game is based on a TV Series of the same name and follows the events to the letter. It’s not the usual rubbish tie-in though, you can always count on Level 5 to not let you down. So, the game then; it’s a semi-action JRPG putting you in the shoes of Van Yamano, a young man with a love for LBX and decent skills for someone who has never owned one. You see, his Dad used to make them, but after Yamano Sr. went missing, Mrs. Yamano blamed the toys and told Van he couldn’t have one. Anyway, events transpire and Van finds himself with an LBX to call his own and off he ventures on a quest to battle lots of people and eventually save the world.

The game fuses your usual JRPG movement through the over-world in a similar style to Level 5’s Inazuma Eleven, and switches to an Armored Core style robot arena when you’re engaged in battle. You see, these tiny robots do battle in mini worlds within the confines of fortified cardboard boxes. There’s your standard attack, jump and dash buttons, with super moves that are charged through attacking thrown in for good measure, and you’ll do these in a variety of locations – from an oasis, to an industrial area, to a volcano. It’s good that things are changed up regularly.

Level 5 have also included your usual rock, paper scissors routine with different types of attack – piercing, slash and impact – which can be nullified with certain defence types attributed to specific armour sets. With the LBX being little robots you can chop and change their armour and weapons to increase their health points, plus attack and defence stats. But that’s not all; you can also adjust the core components of your LBX, putting in new CPUs, batteries and motors to make them last longer in battles. You see, all actions drain your battery, so energy conservation is key. But you can put in other components to help prevent this. Question is, do you want to sacrifice health or defence for higher capacity batteries? It’s a fine juggling act. This customisation aspect is one of the best things about the game, but also one of the most irritating. It throws a bewildering amount of information at you, numbers on top of numbers on top of elemental resistances and attack types. It’s so much to take in, and most of it isn’t really adequately explained. Most of the time you’ll just make sure you have the most health and the right type of damage mitigation for your gear and just turtle your way through the battles. The reason being is that instead of giving you things to work around in battle, Level 5’s idea of challenge is just to up the health of the enemies you fight to silly levels. This means that waiting with shield raised and then attacking for a knockdown again and again is an effective, viable tactic, but also totally dull.

Outside of story mode there are random quests to accept from the bulletin board system, which come in three flavours: battle quest, fetch quest and spot-the-tiny-glint-in-the-busy-background quest. While a good source of credits to buy more LBX parts, these really do not have enough variation long term, and you’re actually better off taking part in battles against persons on the street to earn you medals, which can be sold at the shops for extra credits. These are very plentiful, and the credit rewards can be huge.

Being a Level 5 game, it shouldn’t surprise that LBX is really good looking, I’d say it’s better looking than their other 3DS RPG series, Inazuma Eleven. Sprites are cel-shaded, chunky and detailed, environments are nice and the cutscenes are well drawn and animated, better than the TV show, in fact. Sound-wise the music is repetitive, but the voice acting is really well done, there’ve been no half measures here and as a result LBX is a faithful re-creation of the TV show, without being lifted directly from it.

Little Battlers eXperience is a nice, good looking, inoffensive title that has little originality and some pretty repetitive combat. It’s a great companion to the TV show; kids and fans will love it. Many players may even see it through to the end, provided they don’t get frustrated with the numbers game.

A decent game for those with an action RPG itch, but how much you like to repeat tasks will determine how much enjoyment you derive from it.