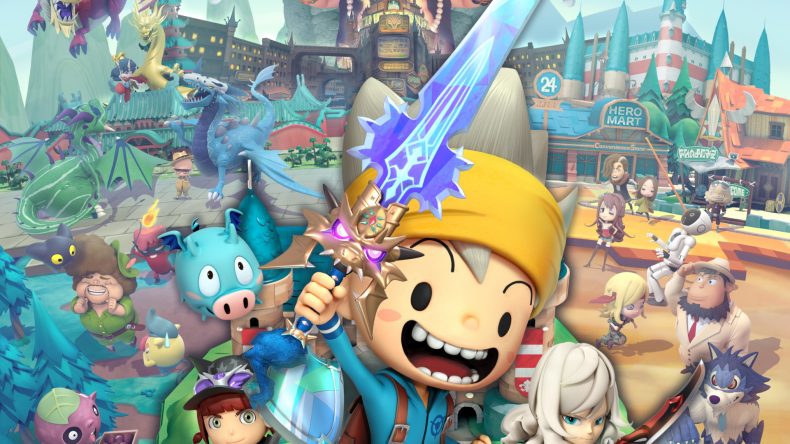 A game title like Snack World: The Dungeon Crawl – Gold should make my eyes roll so hard they resemble a human slot machine. The name “Snack World”, sounds like something out of a toddler’s cartoon. A fact that’s made worse because almost every character and landmark having a food-derived name of some sort. But once I realised it wasn’t taking itself too seriously, I found myself embracing it for what it was. The opening song with lyrics about pork chops was my first clue, and discovering an early boss’ battle song was actually about poo (yes, really) was another. There’s clearly more than meets the eye with Snack World, and beneath its colourful surface is an engaging, surprisingly deep and often funny RPG experience.

In true RPG fashion, you take on the role of a “create your own” hero with convenient amnesia. You find yourself at the gates of the Tutti Frutti kingdom and pass the time helping the Royal Family as your memory slowly returns. Dungeon crawling takes place in randomly-generated areas that culminate in a boss battle. Combat is in real-time and it’s fairly intuitive: there’s plenty you can consider to give yourself the upper hand. There are different weapons – called Jaras – that you take with you. There are melee weapons like swords and axes or wands and bows for ranged attacks. Jaras also have randomised special attacks that use up Jara Points (JP). If your JP runs out, you’ll struggle to swing your weapon and you must swap it for another. Each weapon has specific buffs or is stronger against different enemies, so it’s important to plan ahead. Still with me? Good, because there’s plenty more to get your head around. Snack World takes a more hands-off approach to its teaching of new game mechanics. Most new ideas are offered up in conversation, and then a small paragraph explains what you have unlocked. There’s a fairly comprehensive reference guide to all parts of the game, which is just a button press or two away. I will openly admit to missing a couple of key points, particularly earlier on in the game as new mechanics are unlocked thick and fast. But a quick perusal of the menus was all I needed as a reminder. And to be fair most of the mechanics you have to juggle and consider are fairly intuitive once you understand them.

The reward for you successfully dungeon crawling is not only story progression but also loot based on your performance, as well as any you find in chests or from downed enemies. You use most of this to craft gear to wear, and the same range of bit and bobs are also used to upgrade clothing as you get further into the game. It places emphasis therefore on collecting everything, almost to the point of compulsion, in case that gnarled piece of rubber is integral to your next hat upgrade. True, towards the end of the game, you’ll end up with plenty of most things, but the reverse is also true in the beginning of the game, where that one material you need could feel very rare. If the RNG Gods aren’t kind, you might end up replaying a level to try and nab that elusive piece of tattered cloth or scrap of string needed to craft some better armour.

Progression is scripted through a fairly visible difficulty curve, with each quest having a recommended level to have reached before tackling it. Whilst there are a few examples of surprising difficulty spikes and lulls compared to the stated requirement, for the most part, these feel a fairly reliable yardstick to measure your likelihood of success. What this means in practise is optional side quests become much less optional, unless replaying the Story Quests floats your boat. Often, simply marching through the Story Quests won’t quite be enough to keep up with the difficulty curve. Indeed, Snack World: The Dungeon Crawl – Gold commands a chunk of commitment, but at 25-30 hours for the main game, and then pretty meaty end-game content, there’s a lot here to sink your teeth into. Thankfully that time is quite enjoyable because of the charm oozing from every orifice. The cute world, and those food-related names are propped up with some pretty decent writing, that translates very well into English. Pop culture references and play-on-words are rife and this feels like so much more than your standard language localisation. Care and attention have gone into the details which mean more often than not Snack World’s quips and puns hit the mark. Yes, it’s packed with RPG tropes and cliches, but it balances this with fourth-wall-breaking nods and self-deprecating humour that endears you to it.

You don’t get the sense from how it looks that this a remake of a 3DS game, with updated models and designs making this feel like a fully-fledged Switch game. It’s bright, colourful, and vibrant, with a fair amount of detail gone into everything, be it the items or the enemies themselves. It’s voice-acted in parts, but in that more traditional RPG method of each character having a choice few lines to see them through most situations, that is then propped up by text dialogue. You even have to choose the voice of your hero when you create them, consigning yourself to the same murmurs, questions and laughter throughout the entire adventure. It mostly works, although certain exasperated sentences do wear thin on some characters when used for the twentieth time.

Keeping this game on handheld with the Nintendo Switch is also a masterstroke. Each quest is relatively short, lasting only a few minutes, depending on your luck or keenness to explore in the random dungeons. Quests can be rattled off easily in lunch-breaks and this pace lends itself to that “just one more” mentality that is needed, particularly given Snack World’s overall length. The simple art style means it looks as good in handheld as it does docked, making it suitable for whichever way you choose to play. There’s an undeniable truth that Snack World does feel “lite” in its approach to almost everything. It isn’t a short game, but it certainly isn’t a sprawling RPG epic, either. Also, the random dungeons and limited locations mean you’re often revisiting previous areas, and the random dungeons are always just corridors and rooms mixed together. True, choosing your Jaras to best suit the upcoming quest can be very tactical, although at the press of a button you can auto-assign the best Jaras to take anyway. And once you realise the game will automatically switch to the most appropriate Jaras for the enemy you are targeting, the dungeon crawling becomes a loop of switch weapons, attacking and repeating. That said, the real-time fighting still requires understanding of each weapon, and you’ll still need to dodge or block enemy attacks to avoid taking damage. The bosses aren’t revolutionary, but they require an understanding of learning attack patterns. Simply swinging blindly, even with the most appropriate weapon, is the path to an early grave.

Above all else, Snack World is fun to play. Don’t be put off by the childish setting or the corny names because behind that is an addictive, intuitive title held together with some well-translated writing and quips that make the game feel like a big, warm hug. There’s plenty of depth, but it’s never overwhelming, and you get to grips with each new addition relatively quickly. It might be a little repetitive and watered-down in places, but it still commands your attention through its decent runtime. Looks can be deceiving, but if you’re after a lighter, funnier RPG, Snack World is definitely worth a bite.

Can feel repetitive
Doesn't feel as grand as other RPGs

Underneath the childish, cartoony exterior, Snack World: Dungeon Crawl Gold is a funny, simple but engaging RPG that above all, will make you smile.