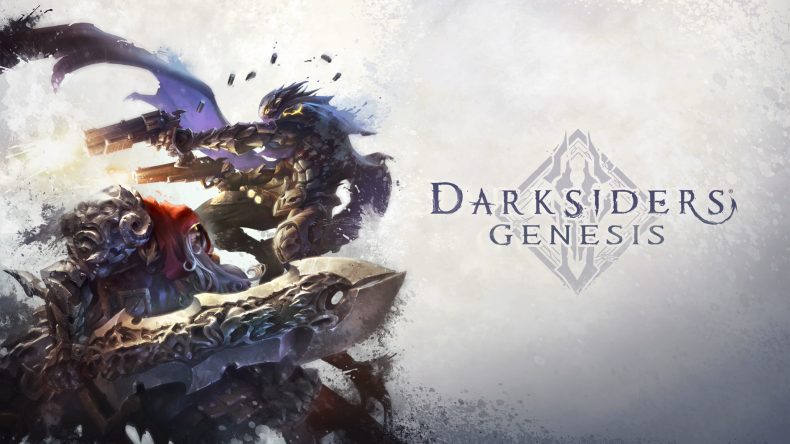 I was pleasantly surprised by Darksiders Genesis when I reviewed the PC release in December, but I genuinely think the delay on the console version may have done Airship Syndicate’s prequel some harm. It feels like a console game, from the way it controls with a pad to the almost Diablo-like instant gratification served up by the trusty formula of “excessive violence equals colourful loot”, and so having to wait for this version now seems a bit weird in retrospect.

The story of the Horsemen War and Strife and their quest to prevent Lucifer from causing a full-on war after the fall of Eden is an enjoyable and energetic romp through an impressive selection of highly detailed locales. You can switch between the Horsemen at any time, and their differing movesets necessitate such back-and-forthery. War is very much as he was in the original Darksiders: huge, gruff, swinging a gargantuan broadsword and hiding a comparatively tiny head between two ridiculous big pauldrons. His attacks are melee-focused and brutal, mixing direct force with elemental special attacks unlocked as you progress. Strife on the other hand is nimble and quick, slashing left and right with twin daggers and unloading a pair of pistols into the enemy hordes. Both characters have a variety of savage finishing moves and their share of special abilities such as Strife’s decoy and War’s ground-pound.

The protagonists genuinely compliment one another, and although you may well find yourself sticking with a favourite now and then, there are moments through where you will need to switch, and every time you do it’s a refreshing change. Not only that, but each horseman also has various abilities that the other doesn’t. For example, War has a Vorpal Blade that can activate distant switches, and Strife can create portals through which objects can be thrown. Solving the many environmental puzzles often requires that the Horsemen work together. Later you’ll unlock demonic forms for both brothers, and a synergy move for each that deal devastating damage to enemies.

Vulgrim returns to hock his celestial wares, while new merchant Dis offers combat upgrades to each brother. Character progression is handled via Creature Cores, objects dropped from enemies than can be slotted in a shared skill tree to improve attack and defence, and activate various buffs and passive effects. Overall there’s a ton of stuff to collect, unlock and work towards, and each stage has a completion percentage that often requires you to backtrack with new skills to max out. There’s so much good stuff in Darksiders Genesis that any bad is almost completely swallowed up, but there are a few minor issues. The screen can get very busy, for a start, meaning it’s not always easy to keep track of where you and what you’re doing. I also had the same issues here as on PC with the platforming. For the most part it’s fine, but certain camera angles make platforming sections frustratingly hard at times. Also, the inclusion of a split-screen multiplayer feels almoat pointless. It may have felt like a no-brainer during development, but not having control over both Horsemen and relinquishing the option to switch at will actually detracts from the experience. I wouldn’t necessarily call it a negative, but I could have lived without it.

Aside that my only real complaint is that the map doesn’t show your position on it. It highlights which section you’re in and crosses off collectibles as you find them (and there are loads to find) but it’s not great for finding your bearings. Oh, and whether or not Strife annoys you will be down to the individual. His anachronistic expressions threaten to shatter the immersion on a regular basis, although the writing overall is solid enough – and despite his constant chatter, Strife does stay just on the right side of entertaining.

On PS4, it’s not as pretty up close as the PC version, but it’s still a lovely game to look at. The environments are detailed and beautifully drawn, and then spell and ability effects light the screen up like fireworks. It also runs mostly smoothly, sacrificing the 60fps for clean, unhindered performance except in the busy boss fights. I noticed the occasional stutter here and there which, while not common enough to be a major issue, is still worth mentioning.

While this isn’t the definitive edition of Darksiders Genesis, it does ironically feel like the version we should have gotten first. It’s just a better fit on console, perhaps given the franchise’s roots, and it arguably would have sold better had it been released here first. Either way, Genesis is an exceptionally fun and well-made game that manages to feel completely at home in the greater franchise despite the difference in presentation, and it comes highly recommended for fans of the series.

While not as polished as the PC version, Darksiders Genesis loses none of the effortless charm, cool, or playability on console. A great addition to the franchise and a must-have for the fans.