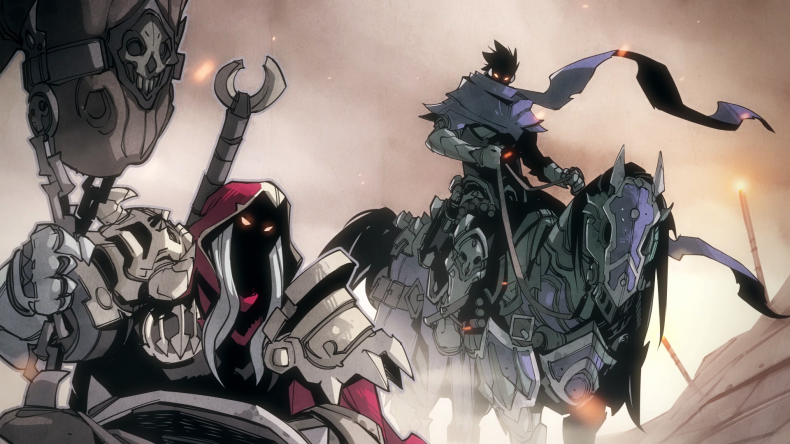 Switch Re:port covers the Nintendo Switch port/version of a game newly released on the platform. Darksiders Genesis was originally released on PC and Stadia in December 2019 and scored 9/10. It also scored 8.5/10 on PlayStation 4.

If you’re one of the folk who’ve been waiting patiently for Darksiders Genesis to come to Nintendo Switch even more so than the other consoles, there’s a chance you’ve also been a little worried about it’s performance on the handheld. It may not be the most graphically taxing game, but the PC version purrs like a cat, running at a silky 60 fps – a framerate sacrificed in the console versions in favour of (mostly) steady visual fidelity. That fidelity, quite expectedly, drops a little more in the Switch version but the handheld still maintains a respectable framerate for the most part. There are more stutters, particularly during the more intense fights, but it largely holds its own.

Where the Switch version struggles is the trade-off between playing docked and undocked. When docked and displayed on a larger screen, the visuals are a little muddy, nowhere near as crisp or as clear as the other versions, but when played in handheld mode the sprites are so small that it can be genuinely difficult to follow the action. Even the button prompts are difficult to read. It won’t be a major issue for some, but for those who struggle with smaller text and “distant” cameras, it could prove to be a problem. I wear glasses all the time, and I found myself squinting now and then to pick out details in certain areas, which is a shame as it’s a seriously good-looking game on the whole. I’ve started off negatively, and I apologise if that isn’t what you wanted to hear, but I had to be honest right off the bat because it’s really the only complaint I have to level against the Switch version specifically. Elsewhere, it’s the same game in every aspect. For those who don’t know, it tells the tale of the Horsemen War and Strife. War, surly star of the original Darksiders game, has been dispatched alongside his fast-talking brother Strife to uncover and stop the plans of Lucifer himself, who is preparing to launch a civil war in hell after the fall of Eden and the subsequent relocation of humanity to Earth. The story is fine, providing enough of a framework to prop up all the baroque posturing and wise-cracking alongside lots and lots of demon-slaughter.

A variety of detailed locales provide a solid backdrop for the action, mixing enough different visual styles together that your eyes will never get bored. The isometric viewpoint does nothing to temper the brutal combat as spell effects and explosions shake the screen, and the hunt for collectibles is as addictive as ever. There’s more than a hint of Metroidvania about Darksiders: Genesis as you unlock new abilities and backtrack to reach secrets you couldn’t get to before, from Boatman Coins that act as a special currency to stone shards that eventually boost your health and spirit meters. War is the more devastating fighter of the two, and his abilities reflect his melee focus, imbuing his Chaoseater Greatsword with a variety of elemental flavours, whereas Strife mixes twin-stick shooting with fast and nimble knifework, caltraps and decoys. Alone, each is deadly, but played together in co-op they compliment one another well.

While you can unlock skills and tools in the world, character progression is handled by Creature Cores, a system whereby you slot Cores you collect from the enemy into a shared tree to unlock buffs and power-ups that affect both Horsemen. It makes levelling up your abilities and stats easy to manage, and means you’re always on the lookout for the next Core. The static camera doesn’t always make it easy to get around or reach distant prizes, however, and the platforming can be occasionally frustrating – though not enough to ruin the overall experience.

Despite losing a little of the polish the other console versions enjoy, Darksiders: Genesis on the Switch feels just as satisfying to play. It has everything the other versions have and, besides the occasional judder when the screen gets busy, it remains an essential purchase for anyone who enjoyed the previous entries.

Despite losing a little of the polish the other console versions enjoy, Darksiders: Genesis on the Switch feels just as satisfying to play