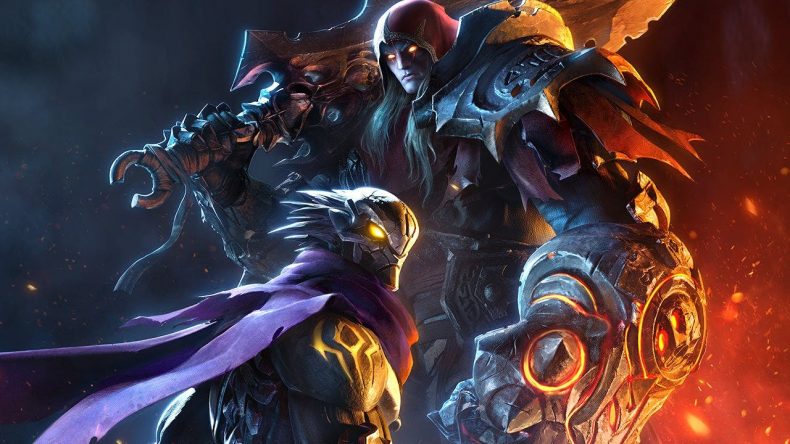 I’ll admit to having some concerns when Darksiders Genesis was first announced. It’s a series that has always been willing to adapt if not evolve, from an initial foray that married elements of The Legend of Zelda and Legacy of Kain: Soul Reaver, through a more loot-focused Action -RPG sequel, to a third game that cherry picked bits and pieces from the Soulslike genre, Darksiders is a franchise forever in flux.

Which, when you look at it subjectively, can only be a good thing. It means it’s never still long enough to go stale, and produces something fresh, to whatever result, each time. For me, though, Darksiders 3 was and still is the series’ weakest entry. The combat felt awkward at times, perhaps thanks to certain elements being forced in, and protagonist Fury lacked the gravitas of War or the menace of Death. And yet being the worst entry in a series like Darksiders is still standing above hundreds of other pretenders. Either way, it seemed to me like the franchise had run its course and I wondered if we’d ever see fourth Horseman, Strife, introduced in the closing scenes of Fury’s tale, ride out on his own adventure. We asked, and the Airship Syndicate answered. Genesis was revealed and immediately pigeon-holed as Darksiders by way of Diablo, an isometric dungeon crawler on a smaller scale and with a tighter budget, an inferior substitute for the real thing. Well, some of those assumptions were right, but some were not.

For a start, the presence of comic book legend Joe Madeureira, director of the first Darksiders, is felt strongly in Genesis. So much so that after what felt like an earnest but slightly misfiring effort in Darksiders 3, Genesis feels like the series coming home. It might sound a cliche, but when you play it you’ll know exactly what I mean.

You’re warned from the off that Genesis is better played with a pad and the developers know what they’re talking about. I played a few early hours with Mouse and Keyboard and honestly, it’s a better fit on the controller. At no point does it feel like a watered down version of Darksiders – it feels exactly like Darksiders 1 felt, but from a different point of view. The combat is weighted and balanced, your attacks feel powerful, the abilities you uncover and the realms you traverse feel a natural part of the universe. This is no Diablo clone, despite the fountains of loot and the PoV – this is a Darksiders game through and through. The plot is the usual Bible-baiting fantasy hokum. Lucifer has done the dirty in the Garden of Eden, and Paradise is in tatters, events which have led to a civil war in Hell. The Charred Council has dispatched two agents, War and Strife, to deal with Lucifer and put an end to the uprising. Siding with the Demon Lord Samael, as well as void merchant Vulgrim and his associate Dis, the two Horsemen must battle through various Hellscapes and slay Lucifer’s generals in a bid to lure out the beast himself.

You can switch between both brothers at will, even mid-fight, but they have different skills and abilities you’ll need to utilise to proceed. Combat sticks to an established formula but feels fluid and satisfying. War, unsurprisingly, hits brutally hard; his attacks are slower but heavier. Strife, on the other hand, wields twin handguns and daggers, so his melee attacks are fast and agile but he can do massive damage at range. Each Horseman has a modifiable suite of skills tied to their combat styles, as well as a bevy of special abilities you’ll need to unlock, such as Strife’s shadow decoy and War’s ring of blades.

War’s Chaoseater greatsword can be imbued with a variety of elements such as fire, thunder and life steal, to alter its properties and secondary attack, while Strife can unlock half a dozen different ammo types including a lava shot and an anti-gravity field. Later, you’ll be able to unlock synergy attacks to tag in the idle brother and perform a devastating assault. Each Horseman also has a Chaos form that unleashes a gargantuan demonic apparition capable of doing huge amounts of damage for a short period. In between the combat, platforming and puzzle solving are the focus. The puzzles are nothing overly taxing, utilising each Horseman’s unique abilities. Strife can create Void portals at certain points which can be travelled through or used as conduits for thrown objects, while War’s Vorpal Blade can activate distant switches or transfer flame FR one place to another. Other abilities are unlocked as you progress which I won’t spoil here, but some later puzzles require complex use of several different skills, often under tight time constraints. Secrets are stashed everywhere, from Boatman Coins to health and wrath upgrades and even special moves.

As you cleave and blast your way through legions of demons and monsters you’ll earn fountains of coloured loot, mostly skulls to refill health and wrath, or bolster your pile of souls – but you’ll also see large glowing orbs known as Creature Cores. These are equippable upgrades that occupy their own tree, offering passive buffs as well as offensive bonuses like random summons and area damage. It’s a simple-yet-effective system to improve the efficiency of both protagonists. It’s in service to the co-op option, which you can drop in and out of at special stones dotted around each stage. Sadly, playing pre-release, I was unable to test the multiplayer element, but will do so at a later date.

If there’s an area that suffers thanks to the forced perspective, it’s the platforming. While the camera does a fairly decent job of swivelling to accommodate, now and then there’ll be a jump that’s difficult to correctly judge. The brothers can jump, glide and swing from ledge to ledge, but some sections require you to overcome veritable gauntlets without dying, and they can be tricky to nail first time. Some of the environments are so huge and detailed that it’s difficult to maintain a proper sense of scale. It’s not helped by a map which, for some reason, doesn’t show your position on it, instead forcing you to pathfind based on the shape of the level or which nearby artefacts you have and haven’t found. While I’m touching on negatives, I should also point out that the writing isn’t always stellar. The plot itself is okay and the banter between War and Strife can be entertaining, but Strife is incredibly anachronistic. He spits words like “Dude!”, and “This is my jam!” while essentially break-dancing on bigger demons during his flashy finisher moves. I can understand the need to create a foil for War’s unflinchingly dour personality, but Strife’s attitude and mannerisms feel weirdly out of place, even when they’re occasionally funny.

But that’s a minor complaint in a title so lovingly made and well-crafted. The pacing is spot on – even the inclusion of an Arena mode halfway through doesn’t feel like filler, but rather an optional method of earning souls, as well as a break from exploration and puzzle-solving. Bosses come at you in fairly quick succession and, while the main events are distraction enough, some of the minibosses are quite heavily reused. For example, you’ll kill the same giant demon with a gatling gun at least half a dozen times. Again though, this is par for the course, and Genesis makes up for it by being so effortlessly playable.

It’s also gorgeous in places, and on a high-end PC with the graphics settings ramped up to Ultra it sings. The detailed environments seep with atmosphere, light and shadow working in perfect unison with the art style to deliver a variety of beautifully grim Hellscapes from frozen tundra to demonic forges and subterranean rivers of bubbling acid. And the score might be one of my favourites this year – I found myself replaying certain missions just to hear the music play again.

To call Genesis a return to form would be a tad unfair to Darksiders 3. Fury’s adventure had some great moments and more than earned its place in the franchise, but Genesis just feels like it’s on a higher level in many regards. From the gorgeous visuals to the smooth, frenetic combat and environments that beg to be explored, the quality on display here is incredibly impressive. Despite a smattering of minor issues and a few iffy design choices, Darksiders Genesis is still a fantastic videogame, and might even be the best Darksiders game to date.

From the gorgeous visuals to the smooth, frenetic combat and environments that beg to be explored, the quality on display here is incredibly impressive. Despite a smattering of minor issues and a few iffy design choices, Darksiders Genesis is still a fantastic videogame, and might even be the best Darksiders game to date.