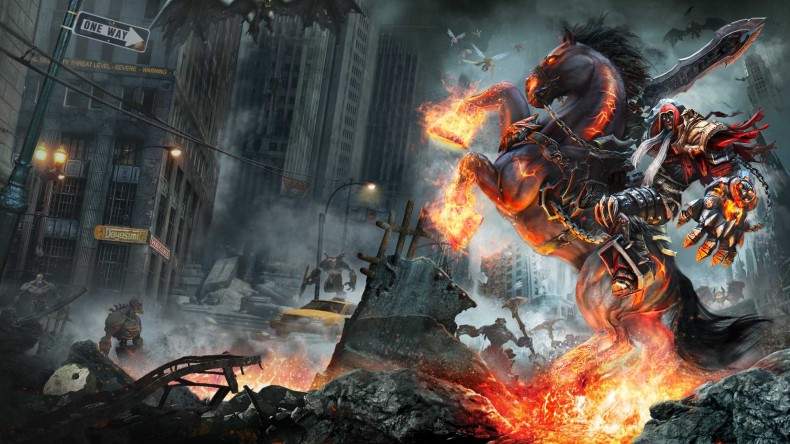 Discarded among the lost treasures of forgotten gaming generations is a shining jewel known to some as The Legacy of Kain. Forget that Nosgoth nonsense; we’re going back further, to the late nineties, when a game called Soul Reaver was busy reinvigorating the 3rd-Person Metroidvania-style adventure. A sprawling gothic masterpiece, Soul Reaver – and its direct sequels, Soul Reaver 2 and Legacy of Kain: Defiance – introduced us to the ruined vampire Raziel and his quest for vengeance against his maker and destroyer, Kain. While many of us spent the years after Defiance praying for a sequel, Vigil Games gave us the next best thing.

Darksiders: Wrath of War is a 3rd-Person hack ‘n’ slash adventure game that follows the titular Horseman after he accidentally causes the complete annihilation of the human race and kicks off the End-War between the forces of Heaven and Hell. His monumentally bad morning doesn’t end there either, as he is stripped of his powers and sent back to the now ravaged Earth to face an army of slobbering demons with nothing but his massive sword and massive hands. What follows is a bloody odyssey through a charred, mutated Earth that has more in common with Raziel’s Nosgoth than anything we know. As you progress through the world you’ll periodically unlock weapons, gifts and abilities to help you move on as well as backtrack and reach previously sealed areas. War’s primary weapon is the Chaoseater sword, a ridiculously huge weapon he uses to gleefully cleave demonic heads in twain.

Basic attacks are mapped to X, but various combos and special moves are unlocked as you progress, along with War’s gun and his horse, Ruin. At this point in the story it all starts to feel a lot like a Zelda game, but with added demon offal. Summoning Ruin allows you to travel greater distances at speed, while mixing melee, magical and ranged attacks makes for a diverse, satisfying move-set.

It’s hard to find genuine fault with the gameplay, even if it does lean a little heavily on backtracking in the final third. Enemy variety is decent, and the plot kicks along at a reasonable pace. Also, it features Mark Hamill, channeling the Joker by way of the Watcher – a sinister entity bound to War who serves the agenda of the overbearing Charred Council. The interplay between War and the Watcher is interesting, as the latter constantly teases and pokes the already pissed-off Horseman. There are other characters of note, including fallen angels, ancient demons and hard-to-please soul merchant, Vulgrim, who takes care of all your trading needs. Through him you can swap collected artefacts for new abilities, or trade the souls of your enemies for weapons, consumables and special moves. Unlike the sequel, the character progression is less RPG and more action game, eschewing XP progression in favour of much simpler bartering. As a result it all feels satisfyingly straightforward, despite the amount there is to unlock

At launch, Darksiders was a surprising hit, far more enjoyable than anyone expected it to be. Even now, its gameplay doesn’t feel dated. The simple process of unlocking abilities, moving on, backtracking and repeating doesn’t get old, and War’s blood-drenched quest feels as fresh now as it did then. In fact, if you missed it the first time around I’d argue that it’s essential, especially given that the remaster is selling for only £15 on release. The enhancements are noticeable immediately. Joe Madureira’s art-style paints the decayed world in vibrant shades of red, blue and violet; characters are bold and bright, and the lighting can be mesmerising at times. Optimised to hold 60fps (most of the time), the Warmastered Edition is slick and fluid. The original was marred by slowdown, texture pop-in and screen-tear, all of which have been eradicated now.

Among the recent glut of remasters, Darksiders: Warmastered Edition stands proudly. It doesn’t feel like just a cynical cash-in, but rather as though someone has poured extra time into a game that really deserves to be played on this generation of consoles. We can only hope that the appeal of this and the sequel – remastered itself last year – are enough to convince someone out there to give the franchise a new home and finally deliver the trilogy finale we’ve been waiting for.

A masterful re-up with a great story, a beautifully grim world and exciting, fast-paced gameplay. And that price point makes it essential.