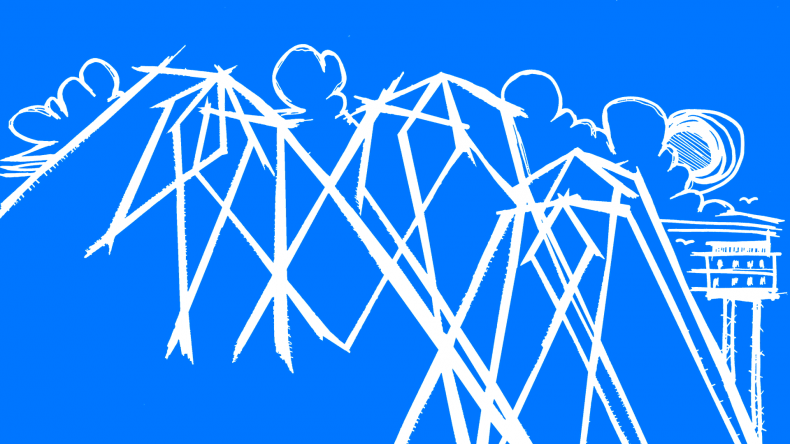 Small Radios Big Televisions is like the stereotypical nerdy girl who becomes the beautiful prom queen, or the caterpillar that turns into a beautiful butterfly, only to revert back to its former self after a while. It all starts off pretty promising and has some great ideas in place, some of which continue throughout the short playing time of around two hours. Unfortunately, the dreary settings and the puzzles become frustrating and a little dull.

Your main goal is to explore abandoned factories that look a bit like oil rigs from the outside, and inside each one there are three cassette tapes to find. There are no characters or avatars, just you looking at the factories for clues – exploring and solving puzzles through a myriad of doors. Remembering where you came from can be frustrating because some of the factories have a seemingly endless path to the exit, providing more than a few painful minutes trying to remember where you came from. So these cassette tapes, then. Well, they’re kind of vital if you want to escape each factory. When you find one of these tapes, it’s labelled with a location, for example “BEACH” or “ARBORETUM”, and by popping them into your cassette player, you’re transported into a virtual world (which can be rather beautiful to look at). You’re only there for a short while, but depending on what that tape was labelled with, you head to that location. You can’t roam about or explore it, but you can have a brief nosey for the game’s main currency: green crystal-like “keys”. In each location, you need to find these keys to help unlock the doors located around the factories.

Sometimes you won’t always find them straight away. With no real guidance on how they work, parts of the factories have giant magnets which rewind the tapes or alter them because of the magnetic fields. When reinserting them into your tape player, the same virtual worlds you’ve been to are now distorted and different – eerie in fact. This can result in one of those green keys appearing where they may not have been before. It’s a nice mechanic, and there’s something about these virtual worlds that feels odd, but in a good kind of way.

There’s a synth-led score that only strengthens the unnerving vibe, especially when you head into one of these virtual worlds. It’s quite a nice-looking game apart from the dreariness of the factories, and even the soundtrack can’t alleviate the ennui. You start to lose interest in exploring the factories, and it’s only the joy in knowing a cassette tape might not be far away that helps you to keep on persevering. There’s a story told between some of the levels told by two voices, but it doesn’t really offer anything other than provide a bit of context to what’s going on.

And that’s kind of what Small Radios Big Televisions is about. Solve some puzzles, find some tapes and exit the building. Its strange atmosphere is intriguing, and the virtual worlds within the tapes are fascinating, but the puzzles aren’t engaging enough to make you play through again, and the designs of the factories are about as interesting as the bottom of your shoe. Deciding to keep the game short is a smart move, as I feel any longer would ruin the experience. Certainly give this one a go, even if it’s just to appreciate the work gone into creating these delicate, self-preserved virtual worlds of an analogue media long forgotten in the digital age we’ve all been swallowed up by.

It’s not a bad puzzle game by any means, and the virtual worlds add intrigue and wonder, but overall you won’t be going back after finishing the two-hour playthrough.

You may also like
Adult Swim Gamessmall radios big televisionsPC