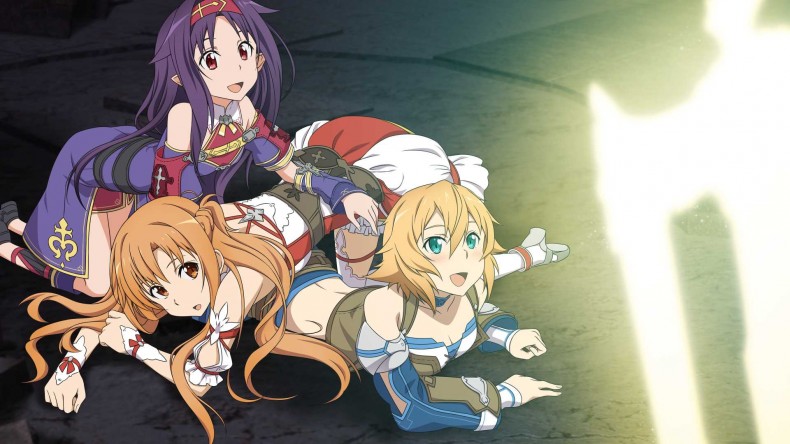 Sword Art Online: Hollow Realization is packed to the brim with stuff to do – stuff you’re probably familiar with in actual MMOs. The thing about the faux MMORPG elements of Hollow Realization is that they’re about as close to the genre you can get without actually making it online. The world is huge, the combat is a lot more than bashing a few buttons and there’s more of a connection between the other people in your party. It’s just a shame that laborious cut scenes and a story with little direction let it down.

Set outside of the anime, the game begins three years after the events of the original SAO, in a new Virtual Reality MMO called Ainground, in the newly named Sword Art: Origin. Unlike Aincrad (the setting from previous games), there is no threat of dying and players are free to log in and out when they want. It’s a more jovial affair this time, bringing a few more laughs to the story. As Kirito, you’re back and ready to have fun in Ainground with your wife Asuna, and other familiar faces like Lisbeth, Leafa, and the unintentionally creepy Yui (I’m still not comfortable with her calling me ‘Daddy’). After meeting a new character, a glitched out NPC called Premiere, Kirito and the gang try to work out what’s going on with her. Some typical problems return from Lost Song, namely the painfully long interactions. There’s a lot of talk between the characters in the same static animations, and they go on for far too long. You can skip them, but by doing so you may miss something important. There’s also some awkward and unfunny chatter that doesn’t come off well, but the last one was similar in that respect. As far as the story goes, it doesn’t get going until a good few hours in and even then it’s in dribs and drabs. After all of the fetch quests and other similar MMO quests, it’d be nice to feel rewarded with a quicker pace.

Story development and long cut scenes aside, the combat and progression is pretty good. You have the standard light attack and heavy attack which you can combine together to form combos, but there are special attacks you can perform by yourself, and team moves called Chain Attacks. The hits you connect increase a damage multiplier, and this helps to wear down your enemies faster. You can congratulate friends in your party (which is now made up of four members, not three) and this helps them to improve their performance in battle. There is a feeling of camaraderie in Hollow Realization, one that hasn’t really worked until now. After you’ve been in various battles, knowing how your team works well starts to feel like a new language, thanking them really does seem to be appreciated. Familiar MMORPG elements are present in Hollow Realization such as equipment drops, and scouring areas can result in finding some cool equipment. There are plenty of areas to visit too, and the plentiful side quests will build up in no time. If you’re not a fan of the typical fetch quest, you might get pretty tired of the abundance of them. The main town’s hub has a notice board where you can pick these up, otherwise, random happenings when out in the various environments will open up giving you chances to pick up some quests this way.

Visually, this is the best Sword Art Online to date. Compare it to other games out there and it’s never going to win any awards, but it’s colourful and sharp, even if some of the textures are a bit off. Action looks good too, and there’re plenty of beasts and creatures that all look diverse when stationary and also in battle. The music is also fantastic, bringing the eccentricities of the AJRPG to the forefront with boastful whoops and bangs. There are opportunities to build relationships with other characters, but it just gets in the way and feels arbitrary to the plot, especially as you’re a married dude already surrounded by countless young women wearing barely any clothes, and its purpose is never really made clear. You can make friends with other ‘real’ players and partner up with them on quests, along with a multiplayer element where you can partake in quests with friends.

Sword Art Online: Hollow Realization is a big game, and if you enjoy fetch quests, boss battles and a hefty story, you should give it some time. The combat is made to feel more substantial than previous games, and it’s a welcomed improvement. It’s an action game at heart, but the MMORPG tropes give it some weight and make it the most authentic SAO game to date.

With it being the first SAO game set outside the anime, it does a good job of creating a new story, even if it takes some time to get going.

You may also like
Bandai Namcosword art online: hollow realizationPlayStation 4