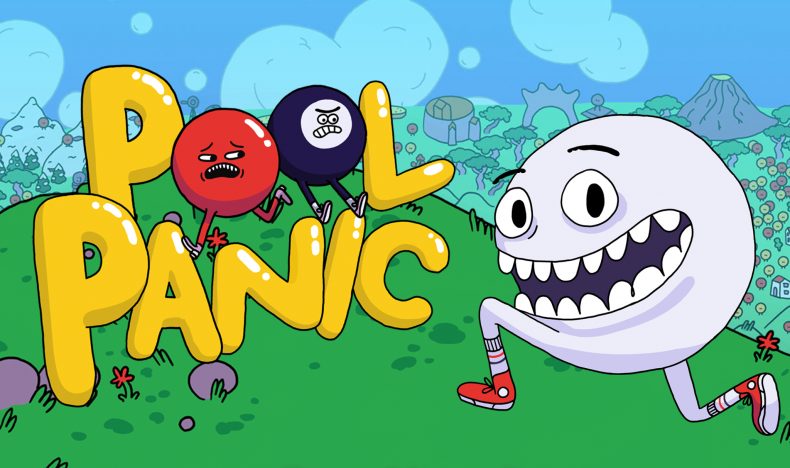 I love games that tweak or do interesting things with sports minigames or certain sports. Golf Story is a great example of a game that takes a basic mechanic but makes things interesting with a story and a ton of side activities. When Pool Panic was announced, I was very excited to see how a developer would take the traditional pool mechanic and make things interesting. The Adult Swim Published and Rekim developed “least-realistic pool simulator” is a blast to play and it never gets even close to being boring.

Pool Panic has you playing as a cue ball that always looks like it is up to no good. Is it the evil smile or just the fact that you can screw around whenever you feel like it and hit other balls into various holes? I’m not sure but this is definitely the most evil ball ever. Your aim is to play more than a hundred levels across varying environments full of their own mini games of pool. The balls you aim to pocket vary consistently and this is what keeps it interesting. Each level also has its own requirements for completion and extra rewards ranging from a time limit, number of shots, and more. Some of the levels made me laugh quite a bit just by how crazy they are when you load into them. There’s a lot of attention to detail with little things like your cue ball picking up random items like a hat or sunglasses and wearing said items. Great art direction is something I look for in games and everything on display here is ace. the environments are colourful and they remind me of some of the hidden object games with a ton of variety and attention to detail with even small objects. There is plenty of variety with the various balls and levels. Animations are slick as well but in its current state, the Switch version has some performance issues. Menus feel a bit laggy and there is some stuttering that occurs randomly. While the performance in game is mostly great, I got really annoyed by how unresponsive some of the menus felt. In one situation it took about five seconds to register an input.

One of the areas I’m a little disappointed in is the audio design. The soundtrack is generally good but the tracks feel too repetitive. One of the early tracks is plain annoying but thankfully things improve as you get deeper into the world. The sound effects for various pool balls are also quite inconsistent in quality. Some feel very well done but others feel tacked on.

The open nature here might be off-putting, but I love it when games just give you a sandbox or let you go wild with. Being able to go almost anywhere from the start and try out different levels across the map is awesome. The only gameplay related problem is the controls. It took a bit of getting used to but the nature of some of the pool ball “enemies” makes for some frustrating situations thanks to the analog control and movement. I would’ve preferred some more control over power or even a gyro option for precision aiming here. Having played some fantastic pool games on iOS like Pocket-Run Pool, a touch screen option for handheld mode would have been great as I feel like the pool minigame works best with touch controls. Speaking of Switch specific features, having video capture available has been great. There are a lot of cool moments like the intro to certain levels and making some great shots so I appreciate that feature being here. The party mode even allows for single Joy-Con play which is always welcome on a Switch game since it is the best local co-op pickup and play system out there.

Pool Panic shouldn’t really work on paper but it manages to be interesting all the way through. I’ve been floored multiple times at the creativity in the pool ball variety and levels spread across a massive open-esque world. I hope it’s patched to sort out some of the performance issues because it is a joy to play on the go. It isn’t for everyone with the lack of direction but I will keep going back to it to try and 100% earlier levels. With Golf Story taking care of Golf and Pool Panic sorting out Pool, I just need a game that does the fishing minigame that I spend way too much time in to release in the future.

Some performance issues
Soundtrack could be better

With its creativity in the pool ball variety and levels spread across a massive open-esque world, Pool Panic manages to be interesting all the way through.