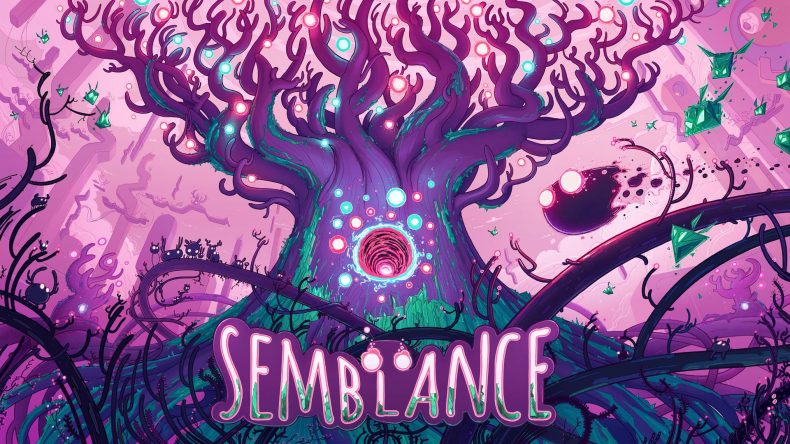 In this day and age, records can be given to anything. Search hard enough in the Guinness World Record books and you’ll find that a Mr Radhakant Bajpai of India holds the record for the longest ear hair in the world. It’s 13.2cm long for those that were wondering, an achievement in anyone’s eyes, I’m sure. So when I came to review Semblance, and found out it had its own record of being the first ever South African game on a Nintendo console, I had to wonder whether this signified something special, or just a load of old ear hair.

Thankfully Nyamakop’s interesting and unique 2D puzzler stands on its own merits, without the need for hair trimmers.

The premise of Semblance is you control a little ball of play-dough around a variety of 2D environments, aiming to ultimately rid the world of the harsh, jagged blight that afflicts it. The way you do this is to collect glowing orbs across an assortment of levels – collect enough and the scourge is lifted from that area, and you progress on to the next. The glowing orbs themselves though will be positioned out of reach, forcing you to solve puzzles to get them.

And the way you do that is what sets Semblance apart from most other puzzlers. Whilst most puzzlers require you to move around the environment to reach your goal, Semblance asks you do the opposite, and move the environment instead. Extending the malleable, play-dough nature of your character into certain parts of the environment means that walls, floors and platforms can be shifted and moulded to your cause. The way you interact with the environment is literally head-first. By charging your ball of play-dough into the surroundings you can shift platforms and ledges vertically or horizontally. Or if you instead headbutt a larger part of the world, you cause an indent, meaning you can lower floors, and raise ceilings, even create undulations in walls, making them possible to climb. It means that each single-screen puzzle containing a glowing orb is not simply a set of obstacles to overcome, but more of a canvas of opportunity as you survey your adaptable setting, and try to figure out how to manipulate it and manoeuvre towards your target safely.

Within this creative approach is woven certain design constraints to control proceedings and add a layer of challenge. For example, only certain parts of the world can be manipulated, whereas others are static. Also play-dough ledges can either be moved, or shaped, but not both, causing you to carefully consider how to use what is put in front of you. It means that you’re free to explore you imagination for how to tackle various puzzles, but not to the extent where they become breakable or trivial because of the sheer amount of freedom and flexibility you have. It’s worth remembering when you play Semblance, that you literally have only two skills at your disposal aside from regular movement and jumping. The first is the aforementioned headbutt type move, and the second is a separate cancellation aura that resets any play-dough in the vicinity to its original shape and place, should you make a mistake or require it to return to its initial form. And that’s it throughout the whole game really. Progression by way of puzzle design is what keeps things fresh. You’ll start with simple, basic platforming and moulding, but then by the end, you’ll be utilising clever timing, elasticity, momentum and even different shapes of your controllable play-dough, affecting your movement.

This melting pot of fresh ideas really is Semblance’s key strength, as nothing gets overused or becomes stale before a new idea or concept gets thrown in for you to explore and overcome. In fact if you’re anything like me, you’ll find that after the several hours of gameplay are over you’ll be left wanting more. Wanting to see what the next clever idea is with the unique concept that Nyamakop has created. And whilst that is a criticism of the game’s length, actually wishing there was more of a 2D puzzler because it hasn’t got stale or repetitive is actually more of a significant compliment than anything else. What is also worthy of praise is the game’s setting which is realised with crisp smooth colours and textures creating a beautifully clean environment to explore. The visuals are elegant and understated in their design, creating contrast and atmosphere where needed, and the quirky denizens that blink at you from both the foreground and background add a sense of a living habitat that is in need or restoring from the jagged sickness that ails it. Coupled with this is an equally unassuming soundtrack, with gentle taps of piano keys creates an ambience that perfectly compliments the serene visuals and the creative nature that the game encourages you to embrace.

I did experience a couple of niggles whilst playing. Firstly there were a few examples of lag, sometimes simply causing mild confusion and separation from the engrossing puzzler in front of me, but in the more extreme cases, causing me an undeserved death as I would unintentionally move into a deadly set of spikes or a laser. It was rare for it to happen, but significant enough when it did to get a mention. There are also examples of when your character can inadvertently get stuck in the play-dough environments, normally through over-exuberant head-butting of the scenery. The game acknowledges this by having an option to reset your character, but this feels like this should be reserved for quick puzzle resets rather than a get-out clause for a slight example of sub-par design. Initially I was confused as to why Semblance has the name it had. It seemed an odd choice. But I think it makes sense to me now, essentially this game has the semblance of just another 2D platformer, the type of game the Nintendo Switch is awash with some very strong examples of right now. But scratch away at the service and you’ll see the reality is quite different. There’s something deeper here, a beautiful melange of challenge, creativity, serenity and fun that few games can muster up. Yes it is a little on the short side, but you only notice that when it’s over because you’re enjoying the experience and that is something that should be applauded. And for its £6.99 price tag, it’s fair money for the time you’ll spend with it, but what’s important is the smile you’ll have on your face during those hours. It also feels like the perfect game to pick up and play, thrashing out a few levels in handheld mode on the Switch during a lunch break or on the train, providing some much-needed escapism for those mundane moments.

All in all, Semblance is a pleasant surprise, showcasing intelligent puzzle design, rewarding the player’s ingenuity and creativity all on the backdrop of its soothing landscape and calming ambient score. It does away with convention, and throws enough different challenges and mechanics in the mix to keep its playtime fresh throughout whilst maintaining a level of challenge. Despite its niggles, I just wish the game was longer, so we could have seen mechanics become even more evolved, and boundaries pushed even further. Unlike that ear hair of course, at 13.2cm, that was long enough.

By letting you morph the environment, Semblance is a new twist on the puzzler, asking you to creatively solve its challenges. New mechanics keep things fresh throughout, but also highlight what could have been if the game were longer and its ideas developed further.

Nyamakop’s Semblance coming to PC and Switch later this year