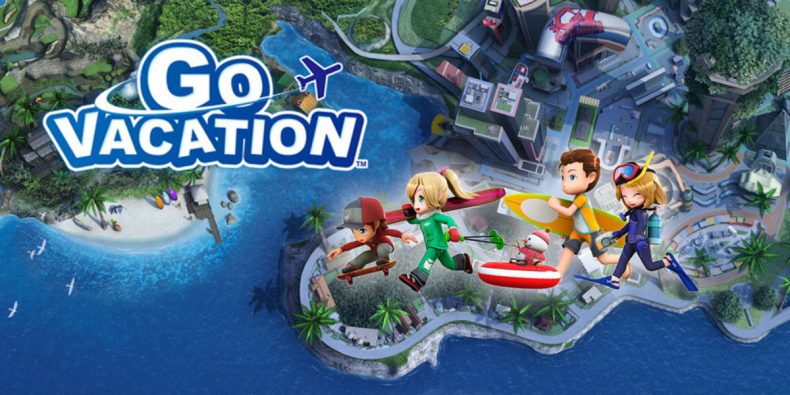 We’d all like to take an indefinite holiday wouldn’t we? Just pack up and go somewhere where we could take part in any activity we wanted, get given a villa, eat and drink to our heart’s content? It does appear that the virtual world is really the only way we’d ever experience that, and the re-release of the Wii’s Go Vacation wants to give you all your virtual holiday needs.

You’re dropped on an island with the ultimate goal of just doing whatever you want, that’s it. There’s an array of activities to partake in, all of which have their own individual challenges to complete, and there’s also so much stuff outside of that too. If you were to ignore what the core game wants you to do you’ll find the resorts are full of photo opportunities, animals to discover, treasure chests to find, people to talk to, dogs to befriend, stunts to do, the list just grows and grows and if anything becomes a little dizzying. To start with you’re asked to collect stamps by doing the activities the resorts throw up to you, collecting twenty of these then gets you your own villa (if only this worked in real life), which you can change the layout of, and furnish to your heart’s content. Then if you go out and take on more activities and complete more challenges you acquire keys which can be used to purchase more furnishing items for your abode, which, uhhh, does precisely nothing except stand there for you to look around.

The resorts are at least excellent places to explore, feeling like actual places full of hidey-holes and bursting with stuff to do. If anything, making your way around these places is probably more fun than taking part in the activities contained within. Having free reign to go wherever and do what you want to do feels much better than moving from point to point for the games. Then again, if you do just want to do the activities themselves you can just go back to the main menu and select whichever one you want to do from there. The phrase wide as an ocean but deep as a puddle has never been so apt as it is for Go Vacation. There’s so much to do, but barely any of it requires any effort, and what effort needs to be expended comes because of poorly executed control systems. Taking part in stunt events for skiing, snowboarding or rollerblading is fun, but not so much for ATV, jet-ski and snowmobile riding. Building snowmen is fun for all of three seconds, the same can be said for water and snowball fights.

Most of the things to do are literally throwaway, like pie throwing, where you need to dodge pies thrown at you, or, pitch hitting, which is just hitting a baseball to break boards to rack up a score. Even games like tennis feel lacklustre due to floaty ball physics; a return to the glory days of Smash Court this is not. Each mode has what are regarded as ‘full’ or motion controls. Full being button presses while motion ones are for those of you who like to waggle. The thing is, the stunt challenges require buttons for horizontal stunts, but still need you to waggle the controller to perform vertical ones; it’s odd, and gets you really odd looks on a 7am commute. Essentially what it boils down to is that so much effort has been put in to making sure Go Vacation has stuff in it to do that less thought was put into polishing those events until they were good, this is like Mario Sports Superstars all over again. Removing a whole chunk of events would not have hurt the game at all, so much of this is going to be forgotten or just plain ignored once the original stamp has been acquired. I mean, there are daily challenges to take part in, which randomly pick something or other for you to achieve, but these will still be largely ignored if they’re for events that are, well, a bit shit.

I guess if you were to consider Go Vacation on wealth of content alone you can’t fault it. There’s a load of stuff to do, but it’s completely devoid of substance and won’t take you long to make your way through, and once you’ve done it, there’ll be little determination to go back. Yes, you can play with others, but even then the appeal wanes quickly. This kind of harks back to the days when the Wii was taking off massively and people wanted to put software onto it that encouraged people to waggle away as much as possible, while the initial appeal is sound, in the long term Go Vacation just doesn’t encourage repeat visits.

Loads of stuff to do

Go Vacation promises a world of fun and opportunity. It delivers the latter in spades, but not so much the former.