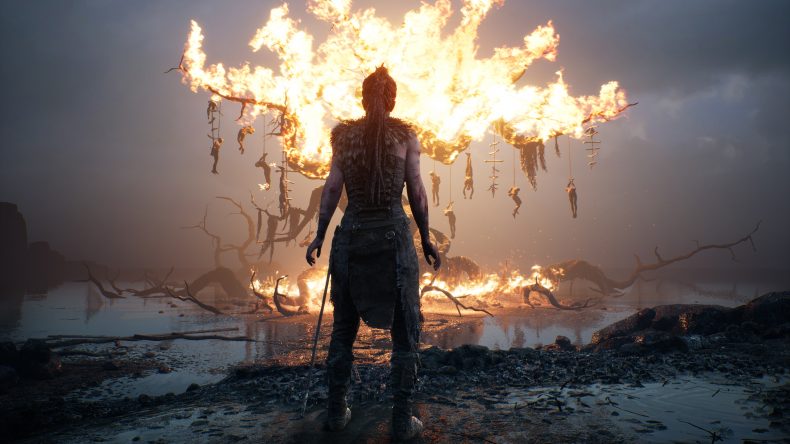 As someone who suffers with anxiety, it’s often difficult to explain to people the feelings that are associated with having it. The crippling feelings of worthlessness, the feeling that if you don’t try something, that you can’t fail at it, and that’s the best option being presented to you. With that in mind – and knowing that Ninja Theory had employed the help of various professionals in the field of Mental Health with the development of Hellblade: Senua’s Sacrifice – I felt that it was important for me to play the title, if only to see how they’d manage to convey the feelings of something that’s difficult enough to explain, nevermind getting someone to actually experience it.

I’m not going to talk too much about the game itself, Hellblade: Senua’s Sacrifice has already been expertly reviewed by GodisaGeek, but I feel it would be remiss of me to not say that it’s an absolutely mind-blowing title. The game’s world is stunningly beautiful. Managing to be gorgeous yet brutal, serene yet terrifying all at the same time. Then there’s the use of binaural audio to give you positional awareness of your surroundings, along with using them to bombard your senses with the voices inside of Senua’s head.

It’s these voices which hit home with me. Having them keep telling Senua that she should turn back, that she can do nothing except fail, but all while having that one quiet voice right at the back that’s saying “well, maybe we could…” is exactly how it feels from time to time. Couple this bombardment of the senses with the movement associated with the use of VR and you have an experience that can make the user feel totally overwhelmed and nauseated. Which is a good thing when the aim of the experience is to make the player feel exactly what Senua’s going through.

Now, onto the VR, which is why we’re all here.

The VR aspect to Hellblade: Senua’s sacrifice is clearly a labour of love from the people over at Ninja Theory. This is proven by the fact that it’s free for anyone on PC who own the game, but also in the little aspects that you can see in the game. For example, you’re not forced into a first person perspective as you may expect, the game still plays like we’re used to, however, you’re free to look around anywhere you want. The cool part is that where you look, you can see Senua looking there too. Giving the sense that you’re still controlling the character, despite being able to see her. Controlling Senua can also be done by looking where you want to go. Pushing forward is done on the controller, but then the user can look in the direction they want to walk, and Senua will arc her movements into that direction. Of course, you can still perform all movements with the controller should you wish, but it’s nice to have the option to control the game simply by looking. Speaking of control methods, using the Xbox Controller (or a similar controller connected to the PC) is definitely the preferred method of play. The VR system I was using was the Oculus Rift, and I have the Oculus Touch controls, and while moving around the game world is absolutely fine using this method, the combat is an absolute shambles. Some attacks are on one controller, and some are on the other. I’m not too disappointed about this though, there’s no hand movements required in the game, so there’s no need to play using tracked controllers, and when the game starts it even suggests you use an Xbox One controller so I shouldn’t have been too surprised that using the Oculus Touch controllers was a hot mess. Still, I was curious, so I tried it.

As Hellblade: Senua’s Sacrifice is quite the intensive experience, it’s recommended at the start of the game that the player takes regular breaks. About a ten minute break for every half an hour of play. I know that most games have a warning similar to this, and I also know that most of us toss that warning wantonly into the wind, however, I would advise against that with Hellblade: Senua’s Sacrifice. It’s very easy – due to a combination of the auditory assault and the VR motion – to start feeling quite nauseous, quite quickly. These little breaks, ensure that you can mentally place yourself back into the real world a little, before getting back into the action. Don’t miss the breaks. You’ll thank me in the long run. The biggest downside for me was the fact that some of the game’s cutscenes were shown in a 2D style, flattened to a single plane as if you were watching it on a cinema screen inside of the headset. While I understand that the was a choice made in the pursuit of a stronger narrative, and making sure the player wasn’t aimlessly looking around while they’re trying to be shown important story beats, there’s no denying that it sucks you right out of the massively immersive experience.

On the opposite end of that scale, and important note has to be mentioned about the times when Senua talks to the voices in her head. In those moments, she looks directly into the camera, directly at you, and because of the headset and being able to naturally move your head around the environment, there’s little denying that it truly is YOU that she’s talking to in those moments. I’ve never felt so much a part of a game before. It was a truly mesmerising experience. In fact, in a moment early on in the game when Senua asks you to give back her “beloved”, and puts her hand on your face, you’d swear you could feel her touch. This moment, in particular, had me taking a break from the game for a little while. I was so immersed that, after it, I was left emotionally drained.

It really is that good.

The VR Edition of Hellblade: Senua’s Sacrifice is a labour of love; and it shows. The world you’re thrust into is gorgeous to look at, whilst also remaining terrifying. The use of binaural audio, along with the immersive nature of VR, allows for an amazingly uncomfortable experience. Exactly how it should be.

Hellblade: Senua’s Sacrifice is an astounding accomplishment that does so much for mental health