Candle: The Power of the Flame Review 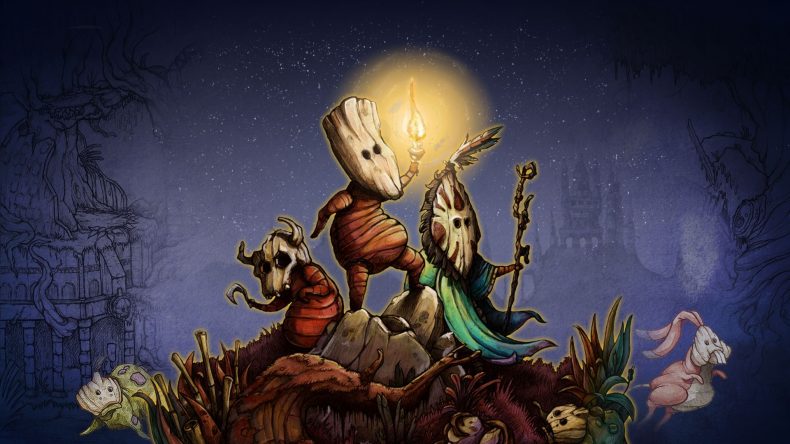 Candle: The Power of the Flame is a game of detail. It has gorgeous hand-painted visuals filled with life and colour, a narrator’s voice that provides richness and history to the story and a focus on puzzle solving that demands your full attention. At first glance it seems to be a simple game; a 2D side-scrolling light-action platformer reminiscent of the old Lucas Arts point and click adventures with a fair amount of puzzles to solve, and for the most part it is, but as you progress the intricacies and details within the stunning artwork start to work against you. Puzzle solutions are hidden within layers of tasks in different areas of the world and the visuals, while always beautiful begin to disrupt the flow of the game. Candle is an experience where its strength is also its weakness.

The story is about Teku, a revered member of a tribe who wields the power of the flame via a candle instead of a hand. His village has been attacked by a rival tribe, the Wakcha, who have kidnapped Yaqa, the village’s shaman and Teku’s teacher. Without their spiritual leader the village is doomed, so Teku must venture out and rescue him. Candle is a striking game, not least because of the artwork, but in particular because of the power of the narrator’s voice that breathes life into the story. Good verbal storytellers are a rare gift; the ability to use the power and cadence of your voice to create colour and magic to a tale you are recounting is a wonderful thing. Done correctly and it will leave your audience enraptured and wanting more, done poorly and they will quickly lose interest. The narrator for Candle: The Power of the Flame is one such person, he imbues the story of Teku and his search for his village’s missing Shaman with a richness that is the beating heart of everything that follows. The narrator truly is exceptional, his voice invoked a strong sense of nostalgia in me for the stories and television programmes I enjoyed as a child, and his ability to keep me interested in continuing with the story cannot be under-estimated as at times the ponderous and obtuse nature of the game play made me want to stop.

That isn’t to say that Candle is a bad game, in fact it isn’t at all, I think it is a good game that is the victim of its own style. Puzzle-solving works in the way of a point and click adventure, that is, you will find an item that you don’t as yet understand why you need it, and it is only by wandering around and experimenting does the solution become clear. Candle isn’t a point and click adventure though, it has platforming and timed moments that require dexterity and skill which are completely at odds with the functions provided to you. Teku can move left and right and can do a modest jump, he also has a run ability that speeds things up marginally and allows him to jump slightly farther. He can also climb, which is achieved by positioning him underneath a ledge whereby he will then pull himself up. The whole process feels clunky and takes a fraction of a second too long, which wouldn’t be a problem if it is was a one time thing, but you are going to be moving Teku around the same spaces multiple times as you gradually piece together the solutions to the latest barrier to your progress.

The spaces you move around in are all beautiful with an astonishing amount of detail, so much detail in fact that the items you need to pick up are often hidden in plain sight. Again, this idea of a busy visual style masking the solutions to puzzles is a nod to the point-and-click adventure, but in those games there are often visual clues leading you towards the solution, not so in Candle. Often the clues are completely obscured by the sheer detail in the scenes and placed in areas that are not particularly logical for you to take Teku to. On one early puzzle I got stuck for so long, simply because I could not see the item I required in confusion of everything else on the screen. This poor visual communication also works its way into more traditional puzzles as well; another early game puzzle requires you to position the arms of three shaman dolls that you find (the locations of which are contained within other puzzles). The solution eventually presents itself much later on, after several other layers of problem solving, and in a completely different area to where the dolls are, by which time the disconnect between the original conundrum and the various other puzzles to arrive at that solution becomes much greater making it harder and harder to stay invested.

Candle: The Power of the Flame is as much a failure as it is a success. There is something wonderful and lovely in it, but it is repeatedly let down by the things that paradoxically make it great. A good puzzle game communicates its solutions to the player through a variety of means, often audio and mostly visual and Candle does do this sometimes, but more often than not it simply doesn’t. The complexity of some of the solutions hidden within incredibly detailed scenes are bound together by the exceptional work of the voice actor as the narrator that does make the frustrations more bearable. However, if you have patience and a keen eye for detail there is much to enjoy with Candle, if you don’t, or you have trouble holding lots of seemingly disconnected bits of information together then you may struggle to enjoy what Teku’s adventure has to offer.

A beautifully drawn adventure told by an extremely talented voice actor that suffers a little from its own style.