Hellblade: Senua’s Sacrifice is an astounding accomplishment that does so much for mental health 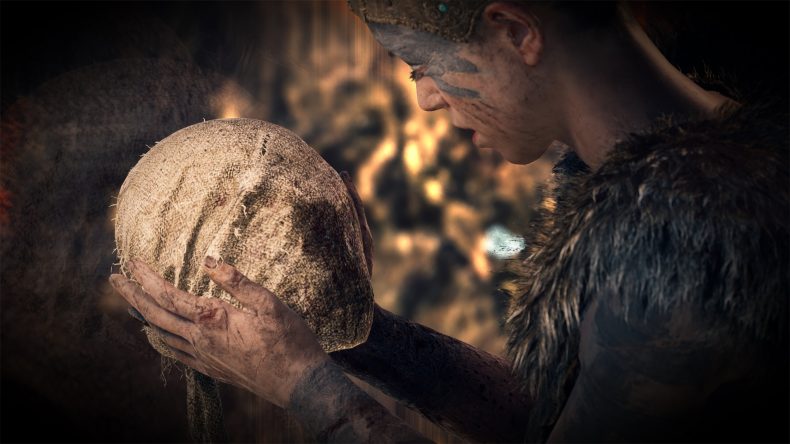 Hellblade’s journey to release was somewhat quiet, sparse on details, and generally ambiguous as to what kind of game it was. I remember seeing some gameplay for the first time a few weeks before it came out, but that was kind of it. Still, it whet my appetite and gave me something to look forward to. We knew it was from Ninja Theory, but it wasn’t being published by Sony, or any big developer at all. Ninja Theory was all in – putting everything it had into making Hellblade: Senua’s Sacrifice, and I had no idea just how it was going to play out for the dev.

Thankfully, about a week before it was released, I had the chance to find out a bit about it after chatting with Tameem Antoniades, the Chief Creative Director on the game. I learned more about what the game was, what you did, how there were certain puzzles you solved, and how you fought, but what I wasn’t quite prepared for – and something Ninja Theory spent a huge amount of time researching – was the mental state of the main character. Senua suffers from psychosis, a disturbing and very real issue that causes her to hear voices. Imagine hearing constant negativity, crippling sadness, frustration, and immutable disgust at every single one of your actions and thoughts. As a mechanic, it serves its purpose, but as a story – as an experience, it does something much more. I remember finishing it and just thinking, “wow”. I couldn’t collect my thoughts, my emotions were in tatters, and one of the best games of 2017 had just introduced itself at the top of my list in a huge way. I knew this was something special back then, but now, Hellblade and Senua’s story holds more weight than I ever expected them to. Now it’s on Xbox One, I had another chance to experience one of the finest games of last year, but also one of the best portrayals of mental health, and an even better story featuring such a strong yet fragile character.

In September of last year, I had somewhat of a breakdown. Not in the typical sense of the word, but a lot of things drove me to such a state that something in my head clicked, and all the recent stresses and unecessary panic I’d been feeling manifested to where I felt a grand disconnection with the world. I started worrying about everything, questioning every comfort and person in my life I thought I knew. I began to despise the thought of stepping outside my door, and having to interact with anybody, just because I felt like somebody on the outside watching in, and it scared the absolute shit out of me. In fact, it still does. I’ve been on medication for the best part of seven months, and whilst I feel nowhere near recovery, I’m starting to cope with it, or rather, accept it. The disassociation is still there, and I feel numb due to the drugs I’m taking, but I’ve learned so much about mental health. Although Senua is dealing with something much more severe than I am, I can relate to it more. I can relate to her struggles – to her fears, and I now know what it’s like to feel so exposed and alone.

You’re probably thinking this has taken a dark turn, but I’m not here to write about the sadness mental health can bring. I’m writing to say how grateful I am to Ninja Theory and Senua’s Sacrifice for portraying mental health as a struggle, but ultimately something you can overcome if you believe you can. If you can face your demons head on and do whatever you can to fight. Playing now, I felt much more of a connection to it than the first time I played: the setting, the demons, and the magic are just tools to convey her struggles, and what happens shows us that mental health may be a curse, but it isn’t something we should shy away from, or accept either. Every fight, every creature, and every environment seems to represent something real. The fire god could’ve been anxiety, or the first crow-like boss could’ve been depression. The wall of screaming bodies reaching out could’ve been Senua’s chance to escape her pyschosis via suicide had she gave into them. The thing is, though, she never gave up – she never lets the world win, and she certainly never lets the voices in her head persuade her that she is worth nothing. She was everything, and Ninja Theory has built one of the finest heroines ever. Better than Lara. Better than Aloy. Better than them all.

She fought against the odds, and she fought against herself. She fought demons – whether actual or metaphorical, she fought them all, and won. Not only is it a phenomenal game to play, but its score, its direction, and its characters make Hellblade something memorable and extraordinary. Whether you’re suffering from mental health, or you want to understand it more so that you can help a friend or relative who is dealing with it, Hellblade is an excellent portrayal of someone living with it every second of their existence. This is a game that should be played by everyone, and with its release on Xbox One, there are much more ways to access Ninja Theory’s finest ever creation.

Video games are cool. Don't let anybody tell you any different.
MORE LIKE THIS
hellblade: senua's sacrificemental healthNinja Theory