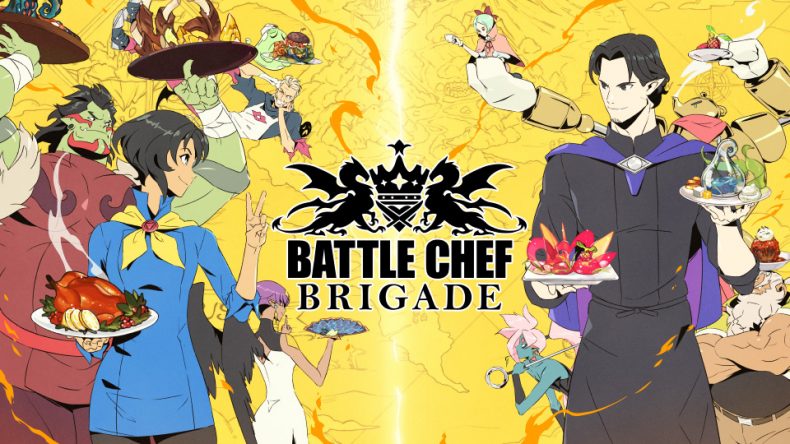 It takes a lot of skill to be a chef. Being able to skin, fillet, and prepare a dish making it look good and taste fabulous is a craft for many to be envious of. Now try ramping it up a bit, and asking people to go and kill great unnatural beasts then in turn create a dish to please even the most discerning tongue, that is where the Battle Chef Brigade comes in.

If you go into Battle Chef Brigade thinking it’s going to be some sort of Cooking Mama/JRPG mashup then you’re going to be sorely disappointed. There’s no leveling up, summoning, move queuing, or micro-processing of ingredients. This is a hunt for monsters to turn into food and then a match-three puzzler in where you’re responsible for the drops that fall into the play area.

You take on the role of Mina Han, a young country girl who aspires to become a Battle Chef of the Brigade, a group of people who have the skill to turn monsters into edible meals for the populace. So, Mina runs away from home to join the academy and prove her worth. During her time at the academy she’ll indulge in cook-offs with her fellow students where you’ll need to create meals to specific criteria provided by the judges and the host Kamin. You may need to create a meal rich in water, but also make sure you use the meat of a Baurun which is purely the fire element. You could also find yourself having to cook for two separate judges; all to a time limit. These battles have two phases, first you need to venture out and collect ingredients by defeating monsters outside the cooking area. Each monster can drop one of several ingredients which have different elemental properties, and you’ll also find a range of fruits and vegetables on plants outside with which you can garnish the dish. The second stage requires you to choose the ingredients to drop into the dish from your now stocked pantry and match them into threes to bring out the flavours. As you match the elements they grow in potency and can then only be matched by others of the same element and strength which then in turn make them even more flavoursome, hence it’s possible to make a dish that contains fire but to make it overwhelmingly earthy for the required judge’s taste for instance.

What’s clever about how Battle Chef Brigade handles the meals themselves is that there’s no way to prepare parts of the meal individually, instead the game remembers what ingredients are used regardless of how you match the elements inside the play area, and creates a dish based on the ingredients, the infusions you match then dictate the flavour, see? Well, it’s actually a lot simpler in play. There’ll occasionally be hiccups like pieces of bone which can be cut out, or matched into three to create a rainbow element which can be matched with two of any element to promote them, as things progress there’ll even be poisonous elements which need to be mixed out to avoid getting less points for your dish. Between battles Mina can indulge in odd jobs to help you get the hang of all the stages of food creation. There’s Belchior, an old man with a love of cats who needs your help cooking so he can find out how to make ambrosia, then there’s the stoic and flippant hunter lady, Thorn, who tasks you with hunting down monsters so you can practice your battle skills, and then Potinda the restaurateur who needs you to match patterns specific to clients and get as many meals out the door as possible. These sidelines are essential to get the hang of speedy meal creation, and considering the game constantly has new things for you to learn you’re going to want all the practice you can get.

It can be nice for a game to keep giving you stuff to learn, but here you’ll regularly find yourself having to keep something new in mind when you hadn’t quite gotten the hang of past lessons. The aforementioned poisonous elements which hit just after halfway through the game are very difficult to manage, and not realising where they are when dropping them in can completely ruin a dish that was going to be outstanding. If it wasn’t already obvious I lost one battle due to a poison element in the last ingredient I added, with no time to remove it, to say I was gutted is an understatement. Like a good dish, Battle Chef Brigade is liberally seasoned with charm, the story is nice without being overly dramatic or twee, and the characters are well defined and written. I love the art style as well, it’s got hints of Ghibli thanks to the simple but colourful character designs and washed out backgrounds. Then there’s the final dishes themselves when they’re presented to the judges, they may be hand drawn and made of monster bits but they look scrumptious, trust me after a while you’ll be hankering after a Dragon steak with a Carranha confit and tomato garnish. I’m making myself hungry just writing about it.

If there’s anything that lets Battle Chef Brigade down it’s the unforgiving difficulty curve. It’s not gradual; it’s steep, almost asking you to master elements straight away to progress is a tall order, and it’s a request made to you constantly due to the relentless introduction of new mechanics to its recipe. It is mitigated slightly thanks to the lessons, but they’re single use between battles, there’s also a practice kitchen, but there’s no clock to battle against there, so it’s hard to get used to the stringent time constraints. Thankfully there’s no hard end if you lose, you can just try again if you’re quick to get over the disappointment.

Battle Chef Brigade is a good game: a match-three puzzler set around monster killing culinary experts isn’t going to set many people’s worlds aflame, but this is a lovingly crafted and charming title that could do with a bit of attention to give the developers the motivation for a deserved sequel. In the words of Kamin: ‘Vive la brigade!’

Steep learning curve
Match-three puzzling not for everyone

A bit different from what you’d expect, Battle Chef Brigade is a pleasant surprise, and like good food it can be nice to try something different once in a while.

You may also like
Adult Swim GamesBattle Chef BrigadePC