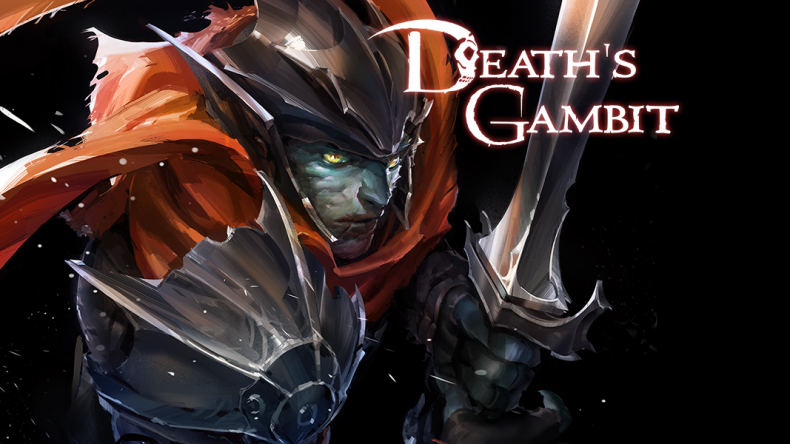 As readers, you grow tired of seeing Dark Souls comparisons in reviews and previews, don’t you? Trust me, we’re not that excited about writing those words, either. In fact, the moment my fingers begin typing the word “Dark,” my eyes are already rolling at the mere thought of what comes next. So, it’s with a heavy heart and my eyes rolling so far back into my head that I could do a fair impression of The Undertaker, that I have to inform you that Death’s Gambit is indeed another Dark Souls-inspired game.

Don’t click away from the review yet, though. It’s true that upon starting White Rabbit’s Roguelite adventure, you’re greeted with a class select screen that might as well be one of those fanmade “demakes” but once the game starts proper, it becomes apparent that there’s more than just From Software in the DNA of Death’s Gambit. The setting and inhabitants of the world may remind you of that game name I’m sick of typing, but there’s also a hint of Castlevania to things, too. The pixel art visuals themselves are very reminiscent of the finest era of Konami’s classic series; there’s gothic architecture and dank caves; plus the weaponry is curiously similar to Alucard’s arsenal in Symphony of the Night. It’s a very pretty game, even if it doesn’t necessarily do anything truly new. But what is Death’s Gambit, aside from a mash-up of familiar experiences? What is it about? Well, it turns out that you’re dead. Bummer. Right from the very start, you’re being dragged toward a pile of corpses on a giant pyre. Upon waking, it turns out that Death wants you to do a few things for him, as long as you sign his contract; do that and you’ll be immortal. He conveniently leaves out that that means you’re still able to die, but you’ll simply reawaken next to one of his statues every time you do. It’s like a really cruel version of Groundhog Day, wherein you actually die again and again in a land that’s basically designed to murder anyone venturing into it. As protagonist Sorun, you’re searching for something that the game slowly reveals over the course of its length, that I won’t spoil here.

This reveals the first problem in Death’s Gambit: the storytelling. Sometimes when you die, instead of being immediately resurrected at the nearest statue, you’ll be whisked away into Sorun’s memories. During these sequences, you’ll learn a little about the quest you were on when you died; introducing the main villain, curiously without actually introducing them by name or anything that might be helpful in pulling you into the narrative. As you get further into the game, the story becomes more and more weird, making it harder and harder to follow. This has nothing to do with me being an idiot, but rather because things jump about so randomly that you just have no chance of grasping the reasoning for any of it. It’s almost like skipping entire scenes in a movie and trying to grasp the plot from the random moments that you end up seeing. This poor direction and confusing design extends to the game world too, as you struggle to get the hang of the layout of the world of Siradon. Unlike something like Salt & Sanctuary, in which the world is designed to always keep you moving in the right direction, Death’s Gambit feels a little more awkward in its design. There were multiple times that I would be begging for an in-game map, because it just wasn’t clear which ways I could go; there was even a point later on, when I was absolutely stumped as to where I was supposed to go next. The daft thing is, Death even makes a joke at one point that directly references Dark Souls’ objectives, but at least From Software gave you a hint about your objectives and the way to go; Death’s Gambit just springs surprises on you and expects you to just know where to go next. The only reason I did progress is because I had visited the place I was supposed to go, hours earlier when I was horrifically underleveled. Problem is, even when I went back all tooled up, I still struggled because the boss could kill me in just a couple of hits.

This conveniently highlights the rather inconsistent nature of the difficulty in the game. As you might expect, enemies will get tougher the further into the game you get; only, Death’s Gambit sometimes decides to throw many overpowered enemies at you at once. Or you’ll suddenly meet an enemy that can absolutely destroy you in a matter of seconds. You’re probably chuckling away to yourself now, telling me to “git gud” or something similar. Sometimes I did, coming back after a grind for levels, and I would succeed. Other times, like one particular boss, I would go back again, dying over and over as my patience began to wear thin. Happily, death doesn’t mean losing the shards you’ve collected from dead opponents; you’ll instead drop one of your health items (feathers, in this case), with the ability to reclaim them at any point. So, it’s entirely possible to spend your shards after death, allowing you to level up even after you’ve been chopped into itty bitty pieces for the umpteenth time.

I do think that Death’s Gambit is a good game, despite the tone of the majority of this review. The gameplay is solid and the combat is weighty, with some decent platforming physics to boot. I enjoyed its sumptuous visuals and the inventive design of some of its creatures and characters. It’s just a shame that it makes some mistakes that result in a more frustrating experience than is necessary, which in turn means that it’s not going to appeal to as many people as other games in the subgenre; and when this particular style of game is growing a little overcrowded, you need to do something extra special to stand out. Unfortunately for Death’s Gambit, there are just too many other games that do things better.

While Death’s Gambit does borrow from some classics, it struggles to deliver the memorable and balanced experience of any of its inspiration. It does, however, deliver a fun and interesting Roguelite adventure.