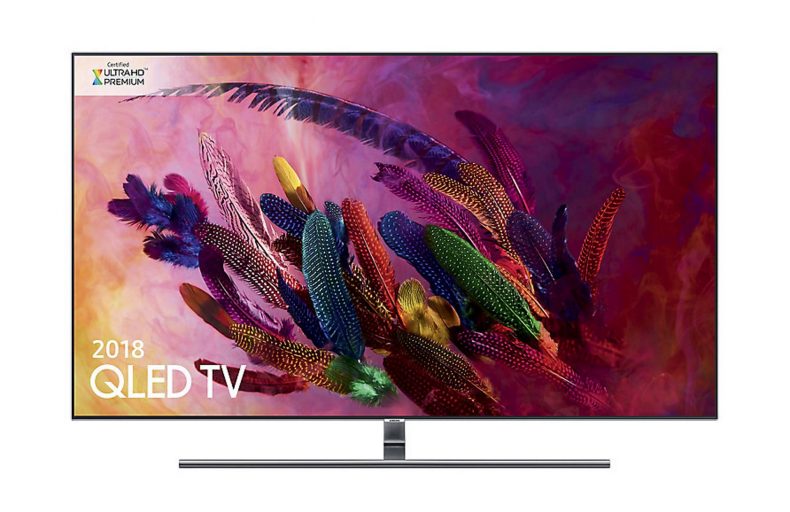 It’s rare to review something that you never, ever want to see leave your home. Let me let you in on a big secret: writing about games and tech doesn’t pay brilliantly. It’s alright, and its offset by, I guess, being like a footballer because you get to work in an industry you love, but the fact a £2000 television was leaving my house and I was genuinely considering if selling a kidney would be worth it, or if I could somehow finance the thing so I could keep it in my life is, well, rather telling.

Of course it doesn’t help matters that my kids wanted to keep it, too, but bloody hell, this thing is gorgeous. I was already using a 4KTV, so the question I kept asking myself is “how is it that this thing looks so much better?”. Anyone who’s seen a mid-range TV (and yes, scarily, at £2000 this is still considered a mid-range unit) up close running 4K games or content with HDR knows what I’m talking about. As an alternative to the LG OLED, Samsung have a seriously brilliant TV here, even though it’s more expensive.

Despite the “mid-range” label (which I still can’t get my head around), there’s a lot in the box to unpack, both physically and mentally. The inclusion of two remotes to give you the opportunity to use a more old-fashioned standard remote or one with voice activation is a classy touch, and while the voice control does work well enough, I remain unconvinced by this kind of tech for TVs in the same way the latest Apple TV remote doesn’t quite do it for me. It’s perhaps a tale for another time, but I rather feel that if you want to do touch controls and voice activation, most TVs have a SmartPhone App for that, and when it comes to a TV remote, most people just want the buttons. Regardless, having both options is a great touch. But it’s the… for want of a better word, box, that is the star here. See, rather than plug your TV in and connect up all the HDMI ports as you would normally, the QLED comes with a large amp-like box which helps keep the TV looking clean and, again, classy. This box is powered, and then connected via a slimline, easily hidden cable, which powers the TV and sends all the devices to it. There are four HDMI ports in the back, along with various other input slots (optical audio, USB 2.0, ethernet, ex-link, aerial), but this “One Connect” box is a great way to keep things tidy, presuming you have the space for it: it’s a heavy box, wider than an Xbox One, and it will take up a “console” sized space anywhere you place it. Regardless, it’s great for easy access if you need to swap out cables, because even the 55inch QLED is massive, and fairly thin, so you don’t really want to be moving it around to unplug cables too often. In fact, given how everything is powered and sent from this breakout box, it’s perhaps a surprise that the TV itself is so heavy. I can’t even imagine how much the 65 and 75 inch models weigh!

Elsewhere, all the standard mod-cons you’d expect on a TV are there, like WiFi and, being a Smart TV, it has Netflix, iPlayer – you get the idea. The QLED starts up instantly, and has an interesting power-down animation that, again, reminds you that this is not a cheap toy. It will automatically pick up any networked devices and let you stream to the TV, which is great if you like to have a connected home. On top of that Samsung are pushing even further with the “part of the home” ideal, not just with the hidden cables and One Connect Box, but also by including a sort of screen saver functionality which lets you take a picture of your wall and send it to the TV, which allows the TV to display it when not in use, blending in with its surroundings. It’s a neat touch, but I’d rather just power it off when not in use, really.

When all is said and done, mind you, you don’t spend this amount of money on a TV to look at it when its off, or play around with cables: you want to consume 4K content with HDR. Put simply, this thing is magnificent. Even switching from a decent budget 4KTV to this one shows a stark difference. I’ve been disappointed in the past when playing games on Switch how poor then look on a 4K panel, so was floored when I saw Octopath Traveler on the QLED. The difference in upscaling is huge, and while you know it’s never going to look as good as a PS4 Pro or Xbox One X running native 4K content, the Switch looks a country mile better on this thing. Normally I’d play around with settings to remove some of the post-processing to images, but in truth, with this model the default settings will do most people very well indeed. The vibrant bright HDR is startling in how good it looks, and despite people warning me the deeper blacks on this model weren’t quite as good as other panels, I think you’d be hard pushed to complain about this thing, quite frankly.

God of War looks incredible. Just stunning. The PS4 Pro I use may sound like it’s going to take off, pushed to its limits, but an already gorgeous game is rendered even better, here. Even Overwatch and Fortnite on Xbox One X, with native 4K resolution are cleaner, brighter. Sure, you’re not going to hear me say “they look like new games”, but they are noticeably clearer renditions of the games. The biggest difference you’ll notice is the brightness, but there’s even a feature that will adjust to the ambient lighting so as not to blind you, because when this thing kicks out whites, you almost don’t need a light on in the room. There’s little to complain about with the picture quality, here, this is a crisp, sharp, detailed picture being put out. Being super-picky, I’d say there’s room for improvement with the motion processing feature, and switching between having it on and off I could never find which I preferred, and you can argue that’s a positive or a negative, really.

Finally, the sound on this thing is way better than it has any right to be. It’s quite shocking how well the bass performs in a small room, and for the money you’re probably not going to need a Sound Bar unless you’re using this in a larger lounge, or unless you want proper surround sound, of course. Even at a low volume it’s, well, loud, so there’s no issue there.

The competition is cheaper, there’s no question, and in the cold light of day, the LG’s blacks are better meaning the bright-end of the two sets is on par. What I can comment on is that, for now, this is one of the best TV I’ve ever seen up close. It’s expensive, and only you can know if you can commit to that outlay. For me, I’m struggling to spend that kind of cash on a TV, but the fact it’s even in my thoughts should speak volumes. Make no bones about it, this is a serious competitor for “best on the market”, with its vibrant colours and sharp picture, excellent sound, and classy breakout box solution. I didn’t want to see the QLED leave my office, I really didn’t.

Make no bones about it, this is a serious competitor for “best on the market”, with its vibrant colours and sharp picture, excellent sound, and classy breakout box solution.