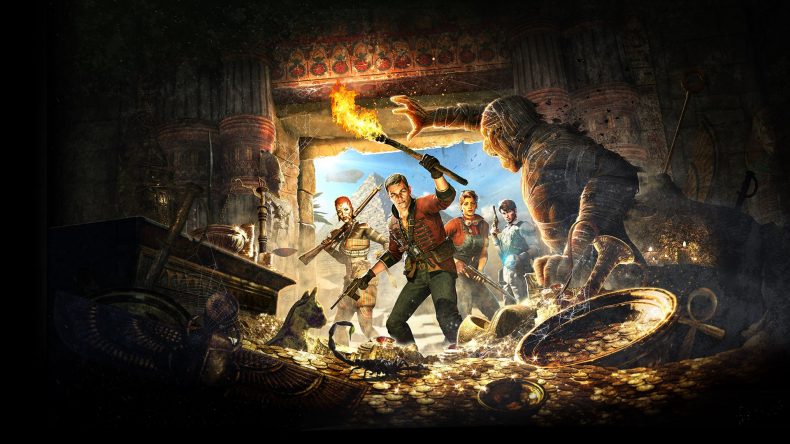 I admit to rolling my eyes once or twice during the first Sniper Elite, with its janky performance, iffy aesthetics and cheesy protagonist. I remember thinking the franchise would die a quiet death and disappear. Happily, I was proved wrong, and by the time I worked my way through Sniper Elite 4 and its rather silly Nazi Zombie spinoff, I was pretty much all-in with Rebellion.

Strange Brigade is their first new IP in a while, and it really like a game developed by a studio who have found their stride. There’s a certain confidence to it that suggests Rebellion know its every fault and weakness, but also know they’ve compensated for nearly all of them.

Taking place between World Wars 1 & 2, it’s a third-person shooter following the titular Brigade, a ragtag bunch of mercenary treasure hunters and occult investigators who travel the world vanquishing evil and digging up ancient relics. Think Indiana Jones or Brendan Fraser’s The Mummy reboot and you’re on the right track. Being the tongue-in-cheek romp that it is, Strange Brigade doesn’t take itself seriously. It’s full of wise-cracks, one-liners, cheeky references to a bunch of different franchises (not least the aforementioned Indy movies), and a general air that even with all this death and destruction threatening the fate of the world, no one’s really all that worried.

The story follows the foursome into deepest, darkest Egypt, where Queen Sektet has arisen to forge an army of mummies an monsters with which to conquer the world. There’s scientist and historian Archimedes de Quincey, plucky factory lass-turned-adventurer Gracie Braithwaite, heroic tribeswoman Nalangru, and former soldier Frank Fairburne. Each has a starting loadout which you can change and expand with treasure found throughout each stage, as well as access to cooldown-based grenades (stickies, dynamite, mines, etc), and four special moves each. These are tied to the amulets worn by the Brigade that allow them to remove certain obstacles, interact with puzzle doors, and store up supernatural energy left behind by vanquished foes. Hitting Circle when the icon is glowing will unleash a powerful area of effect attack or buff, but it takes a while to refill after each use.

Levels are a mix of frantic squad shooting (or solo shooting, if you’re brave) reminiscent of Left 4 Dead, exploration and puzzle solving. Most stages are pretty expansive, and each will take you a good 45 to 60 minutes to fight through and find all the collectables. If anything, they could probably have been cut in half, just for convenience. Thankfully, Rebellion have done their best to fill them up with secrets and puzzles that house a total of 48 collectable relics, weapon upgrade gems, and loot. In addition to being able to socket guns with various powers like health regen or increased damage, you can also find special weapons that last for as long they have ammo in them. These include flamethrowers, grenade launchers, sniper rifles, a blunderbuss, various assault rifles, a crossbow… you get the idea. Each one is incredibly deadly and will often be the difference between life and death. Periodically you’ll trigger a set-piece like a Left 4 Dead crescendo event that will bring the horde down upon you. Special weapons and amulet attacks are essential during these moments, as are the traps that litter the levels. Flame-grids, swinging logs, giant axe blades, whirling scimitars, falling boulders, and a bunch of other instruments of death are at your disposal.

And you’ll need them, too. Strange Brigade hurls huge groups at you often, and fills them with special enemies with an impressive variety of weapons and movesets. Some spit poison, some teleport, some throw spears, or bull-rush you. Fights can become manic in no time, though there doesn’t seem to be much difference in difficulty whether you play solo or with others. Enemies may be a little tougher and slightly more numerous, but it seems decidedly harder alone.

Each level contains a few puzzle doors, behind which lie rare treasures and upgrades. Arguably, the puzzles are more impressive than the combat. Uncharted-style picture puzzles abound, as do pipe-connectors, memory games, and time trials. None are overly taxing, but they’re tough enough to justify their existence and add a much-needed intellectual layer to all the mindless shooting. Replayability is limited, besides rinsing levels for all the relics if you’re a completionist. Instead, Rebellion have added a few alternate modes to give you more to do either alone or with friends. The Horde mode is fairly self explanatory, as you fend off wave after wave of enemy, earning money for limited time special weapons and upgrades. It’s rudimentary but lots of fun, as each stage (unlocked as you advance the campaign) contains traps and secrets to help you survive. Alternatively, Score Attack mode is an arcade-style run-and-gun mode, wherein you must blast through enemies and avoid damage to grow and maintain your score multiplier.

One issue I encountered was that when I played through a level for the first time in multiplayer by joining a friend’s game, I had to go back through it in my solo campaign to advance. Given that it took an hour to complete, I was a bit frustrated. If multiplayer is an option for the campaign, and my collectable progress was saved (which it was), then my campaign progress should be saved, too.

If anything, it’s a shame Strange Brigade isn’t just a little more polished. Character movement can feel a bit floaty, and the shooting is rarely precise, even with auto aim. If you’re praying and spraying with a machinegun, that’s one things, but some areas require you to race too certain points and shoot targets to unlock doors. The manual aim and lack of a dedicated sprint button made these moments frustrating, though thankfully they’re not all that numerous and usually signify an end-of-level boss fight or horde attack. Graphically, Strange Brigade is unmistakably from the same stable as Sniper Elite. The settings aren’t particularly inspired, being mostly caves, deserts, catacombs and tunnels, but frequent splashes of bright colours pop, and the environments are highly detailed. Occasional jump scares such as a flurry of bats or a screaming spirit rushing the screen are also a nice, B-movie touch.

There’s so much to like about Rebellion’s squad shooter that most of its negative points cease to matter very much. It’s not perfect by any stretch, but it’s a confident romp by a developer that knows its audience. If nothing else, I’ve rarely played a game with so many explosive barrels per square meter, and that’s a definitive win in my book.

Shooting needs tightening
Levels are a touch too long

There’s so much to like about Rebellion’s squad shooter that most of its negative points cease to matter very much. It’s not perfect by any stretch, but it’s a confident romp by a developer that knows its audience.