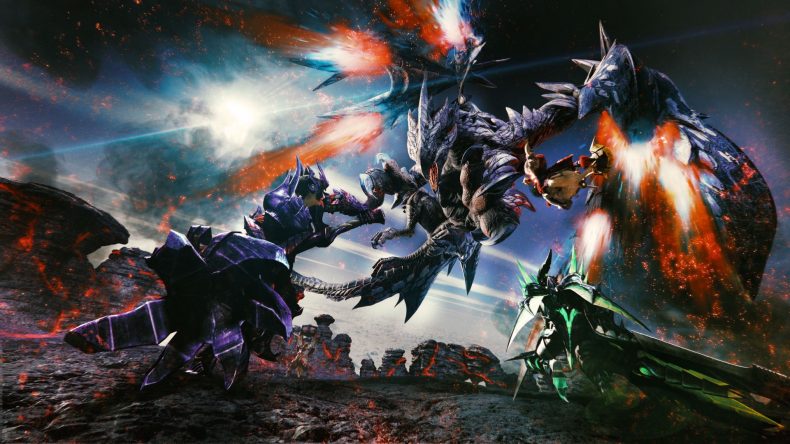 For those of you as confused as I was about Monster Hunter Generations Ultimate’s place in the franchise as a whole, it’s actually the updated Switch version of Monster Hunter XX (that’s Double Cross), which was the Japanese Switch version of the 3DS’s Monster Hunter Generations. It was originally released a few years back in 2016, though it being an enhanced port of a 3DS title, you’d be forgiven for thinking it was much older. This edition is enhanced even further with improved controls, more content, and more polished graphics, and was released to Japanese audiences around this time last year.

If you’re one of the ten million people who bought a copy of Monster Hunter World, but are in the sub-category of players who have never experienced the franchise before, you’re probably a little unsure of what to expect. Speaking frankly, there’s a fair chance you’re going to be a little disappointed. This is an older Monster Hunter, and a much less streamlined experience than World.

Even within the franchise, Generations Ultimate is a bit of an anomaly. There are elements of it that were brand new, and still weren’t carried over into future releases. The basic premise remains the same, but as your greenhorn hunter arrives in a new village ready to track and research the many dangerous species of indigenous life. The starting village is Bherna, but you’ll progress through three more settlements as you play. The set-up is deceptively simple: it’s a case of selecting a quest, stocking your item pouch with essential tools, and then heading out into the wildlands to either gather ingredients or hunt and slay a monster. Generations Ultimate has a mind-blowing 93 large monsters to hunt, which for the sake of comparison is about 60 more than World. There are no Investigations or Expeditions, however; questing in GU is all-business.

Initially you’ll take on the low rank 1-Star quests, but it’s advisable for newbies to jump into the training missions first. Even if you’ve spent a lot of time in World, there are new things to learn, not least because although the 14 weapon types are largely unchanged, there were several moves, combos, and abilities added later that are missing here. There are also the Hunter Styles and Arts, which were introduced to the series in the original Generations (which only had 4, compared to Ultimate’s 6).

The base move-set is pretty straightforward, having been re-designed for the Switch to make use of the twin analogue sticks (thank God). You’ve a primary attack mapped to X, and a secondary attack mapped to A. Pushing B will perform an evasion move (a combat roll or quickstep) and Y activates the selected item from your wheel. This will only get you so far though, as there’s no training area to practice in. Actually, it’s deliberately obtuse, explaining very little in detail and asking that you learn by doing. This is all well and good in theory, but in practice it’s simply frustrating, especially when you throw the Arts and Styles into the mix. Arts are special moves related to the weapon you’re using that can activate things like roundhouse slashes or various buffs. They’re gauge-based, and how you fill the meter is determined by which Style you subscribe to. So, for example, Valor Style (renamed from Brave) requires that you block and evade at the right time in order to fill your gauge and counterattack; Aerial Style, quite obviously, allows for more airborne attacks (and so is ideal to pair with the Insect Glaive). The Alchemy Style is probably the weirdest, and only really useful for group hunts. This Style gives you a magic barrel that you shake to produce various boosts and buffs (think a greatly dumbed-down version of the Hunting Horn). The Arts, which you can unlock as you progress and assign to the D-Pad, can often give you a momentary advantage in combat, but to be honest I often forget I’ve got them. The system feels unwieldy and tacked-on, and it’s not hard to see why they never made the transition to World.

As you’d expect, your stats are entirely gear-based. The only way to really improve your hunter is to gather ingredients and visit the smithy to craft new armour sets. There’s a ridiculous amount to craft, but the recipes often require far too much grinding. Partly this is due to the way gathering points work in GU. A mushroom is just a mushroom, but when you gather from it, the random number generator goes to work and what you find is random. This is the same for bugs, flowers, ore, and berries, meaning that you can’t simply seek out a latchberry bush, you’ve just got to hope you get them. Also, gathering tools are finite and take up inventory slots. You need nets to catch bugs and a pickaxe to mine ore – even the whetstone is a single use item you’ll have to stock up on. It feels like a grind almost immediately, but the bite-sized mission areas and rudimentary map compensate a little (incidentally, the map also takes up an inventory slot). Quest areas are broken into small, numbered arenas separated by short loading screens. There are no scoutflies, so you’ll need to hit a larger monster with a paintball if you want to track it between areas. Graphically, the environments are low-detailed an pretty ugly, but still a vast improvement on the original 3DS version. Some areas are inhabited by smaller monsters, but if you plan to carve them you need to be quick as their carcasses disappear inside of ten seconds. The map setup gives the world an oddly disjointed feel, as one moment you’re by a river and the next you’re deep beneath the tree canopy or in a cave. Traversing back and forth on gathering quests can feel like a chore, especially as your stamina bar runs out fast and is constantly becoming shorter. You’ll need to eat rations or meat to replenish it. Some later areas have health-sapping effects such as extreme heat or sub-zero temperatures, and if you don’t take enough potions or tools to counteract these effects, you’ll just constantly lose health while you’re trying to explore. You can always run back to base camp or use a farcaster for an instant teleport, of course, where you can have a rest and refill your health and stamina.

Creature animations and attack patterns are characteristically on point, turning every large monster hunt into a real challenge. That said, fighting larger monsters can be a tiresome affair even if the sheer variety on offer means it’s rarely actually boring. There’s no indication of the damage you’re doing other than that eventually the target will go still for a while and pant, or run away to a new area (which means you’ll have to chase it – and good luck if you didn’t hit it with a paintball). After enough damage is done, the monster will limp back to its nest, allowing you follow it and either kill or capture it. The lack of a dedicated lock-on button is a huge pain, and even with the focus camera it’s easy to lose track of your prey. It’s not helped by the unwieldy item wheel that requires you to hold L and cycle with the face buttons to select items and ammo types. Veterans will scoff at me here, I’m sure, but the simple fact is that Generations Ultimate is not just older but inferior to Monster Hunter World. So many of its systems are clunky and almost maddeningly unintuitive that new players will long for some simplicity. Even the smithy’s forge menu is unclear and difficult to read, and the lack of a wishlist for required materials means you’ll either need to have a really good memory or keep a pen and paper handy.

Another addition is the Prowler, which is essentially a playable Palico. Felyne companions are hired at a ranch, either from a roster of pre-made puddytats or created by you. They can be outfitted and trained, and you can take two out into the field with you for every quest – or you can switch to Prowler Mode and play the game as one of your furry friends. Missions structure is the same, but you won’t have access to your items or abilities, and instead will need to unlock Prowler abilities, which takes a while. Aside the novelty of it, I really don’t see why the option was included in the first place, as there doesn’t appear to be any benefit to playing as a Prowler or having one in your party if you’re grouping up. They’re cute though, I guess, so there’s that.

The endgame paves the way for G-Rank, a third tier of challenge with harder monsters and tougher gear sets. These quests are accessible from the gathering hub, in this case a bar on an airship, because why not? Alongside G-Rank quests, you can also hunt “Deviants”, which are alternate versions of existing monsters that drop extremely rare materials to craft much more powerful weapons and armour. It’s an ever-steepening grind, but if you make it that far you’re all-in anyway. Generations Ultimate runs smoothly enough on the Switch, but then it’s hardly resource-intensive. It looks better in handheld mode, as the smaller screen disguises some of the iffier textures. Regardless, being able to take it anywhere is handy, even if the expansive nature of most quests means you won’t get a lot done during a morning commute. To be completely frank, it feels a little weird to be playing this game on the Switch after hammering through over 400 hours of World in the past 8 months. It’s an uncomfortable step backwards that I fear is going to see a huge initial rush of sales followed by a mass migration back to Monster Hunter World. Veterans will get more from it, but then most lifelong fans will have played plenty of this in its previous forms.

For what it is, Monster Hunter Generations Ultimate plays well enough. There’s a vast amount of content for players who do manage to click with it, but there are so many inconvenient, clumsy systems at play that it’s often more of a chore. It’s a shame, because the base concept is as solid and compelling as it’s ever been, it’s just that, with the beautiful, streamlined World, Capcom spoiled us, and despite the inclusion of G-Rank and almost 100 monsters to hunt, Generations Ultimate feels like they’ve taken away our shiny new Ferrari with two seats and no cupholder and given us a bigger but clunkier, less-attractive old Estate to drive around with instead. Veterans may jump at the chance to lap this up all over again, but new players hot off the back of World may struggle to find their feet.