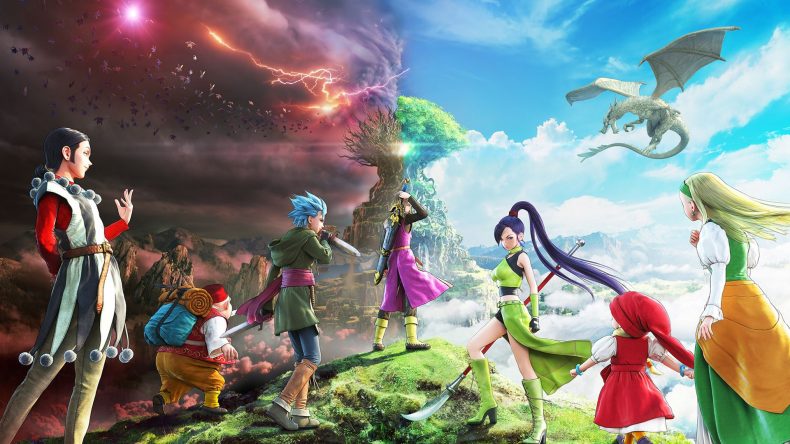 While the franchise is above a cultural phenomenon in Japan, Dragon Quest has had quite the rocky history in the West. Despite that, Dragon Quest is the JRPG franchise for many in Europe and North America and having only gotten into it recently through the DS, 3DS, and iOS ports, it has been great seeing how it has evolved while staying true to what made it great over the years. While most JRPGs have tried to cater more to the West with action combat or basically losing their identity, Dragon Quest has been consistently great when the games actually get localised.

In a lot of ways, this release reminds me of Persona 5. For many, Dragon Quest began with Dragon Quest VIII on the PS2 and that fan-base has had to wait with no home console mainline entry until now. Persona 3 or 4 on the PS2 was also the intro or gateway to the Persona franchise for many and while you already know how fantastic Persona 5 is, Dragon Quest XI is not only a superb follow up to Dragon Quest VIII for the franchise, but it gets so much right that it is the perfect traditional JRPG and I’ve had a blast with my time on it. Persona 5 was definitely a break out moment for the franchise in the West and it remains to be seen whether Dragon Quest XI manages to reach those highs. The diverse cast of characters, paired with a memorable story with loads of twists and turns, is a recipe for one hell of a memorable experience. Without getting into any spoilers this is a story that will definitely bring you joy and one that will no doubt engross you for longer than most people spend in any game. The way new party members are introduced is also nicely thought out and the various story arcs that intertwine throughout your long journey here are all very engaging. Jade is definitely my favourite of the lot here. It almost feels like an early era JRPG story released for the most modern system out there visually in a lot of ways looking at how the story progresses, and the various gameplay staples in the franchise that are present. The way the world continues to open up fills you with a sense of grandeur and wonder almost all the way – and that’s quite an achievement.

The word “traditional” springs to mind when considering the combat and gameplay. While there are various quality of life enhancements that make the experience better overall, this is still a true Dragon Quest game. There are some interesting additions like the forge during camps, which lets you make or improve equipment, and more traversal options across the big world and in towns. There’s a plethora of secrets and the developer has definitely thought things through and made it so that you’re rewarded well for trying out new things or exploring. The (optional) new camera setting for combat lets you move around during the turn-based battles, but it’s just cosmetic. It’s great to just soak in the area or get a closer look at your characters who may be under the influence and get a nicer look at enemies. It’s an option that at first seems a little pointless, but now I can’t go back to the old school mode. Square Enix has been pretty upfront with the various additions and new features, but some of them are well worth highlighting. The run or dash button is a godsend for just speeding past enemies in an area to get to the safety of camp. The new user interface looks and feels modern. I’ve always believed games need multiple difficulty options and they’ve added various things for players to tweak to adjust the difficulty to their liking here through Draconian Quest. The first-person camera photo mode is also a nice addition.

Unreal Engine has been a saviour for big budget releases in Japan with Square Enix using it for Kingdom Hearts III, Final Fantasy VII Remake, Octopath Traveler, Dragon Quest XI, and even Atlus using it for Shin Megami Tensei V. This is the first big budget JRPG to use it for a massive world successfully and the results are nothing short of stunning. Toriyama’s art shines more than anything before it here; seeing the lovely franchise staple monsters recreated with smooth animations here is excellent – even the characters and NPCs have great and detailed models with brilliant animation. Status ailments in combat have a lot of attention to detail alongside the very well done combat and magic animations, and the new photo mode that lets you go into first-person and disable the UI will have you taking tons of screenshots for sure.

One of the big additions for the English release is not only voice acting but also lip-syncing to match the English voices. Fans will likely remember how VIII on the PS2 had voice acting only in the Western release and that’s exactly what’s happened here. Dialogue delivery is great across the board with varying accents representing different areas in the game and a main cast that delivers a memorable performance all the way. Music is so important to me in games and I was pretty disappointed with the soundtrack here, because while I love the midi scores in Dragon Quest games, I don’t like is music reuse. For newcomers to the Dragon Quest franchise as a whole, this will not be a problem, but I go into a new Dragon Quest game expecting some great tunes as we had with VIII. The music is definitely a weak point here with the reuse and some of the newer tunes not living up to the franchise pedigree, and no amount of orchestration can fix that. Outside that, there are two flaws that disappointed me. I know a lot effort goes into fixing performance and visual issues for localised releases, but Dragon Quest XI sees Square Enix put in a ton of effort to adding loads of new features for the West, but it didn’t fix the issue with some of the grass or the environmental issues when moving around. There is PS4 Pro support with native downsampling support for 1080p displays, but for some reason grass and some environmental objects have a weird shimmering like effect. This is the only visual issue of note, and while I did get used to it, I was hoping it would be addressed since it has been a long time after the original Japanese PS4 version came out. The other annoyance lies in how items are handled. Being forced into individual inventories for items is irritating. Some things need to be left behind to move ahead and this is one of them. Not being able to buy more than nine items at once is something else that annoyed me early on.

Dragon Quest XI is easily one of the best JRPGs of the generation and it can sit safely alongside the likes of Persona 5 and Ys VIII. Square Enix not only stuck to its roots with this game in Japan by creating a big budget traditional JRPG for home consoles, but also went above and beyond with the additions and enhancements for the English release of the game. If you’ve been waiting for a true follow up to Dragon Quest VIII or just have been craving a massive JRPG with a gorgeous world, this is the game for you.

Square Enix not only stuck to its roots with this game in Japan by creating a big budget traditional JRPG for home consoles, but also went above and beyond with the additions and enhancements for the English release of the game.