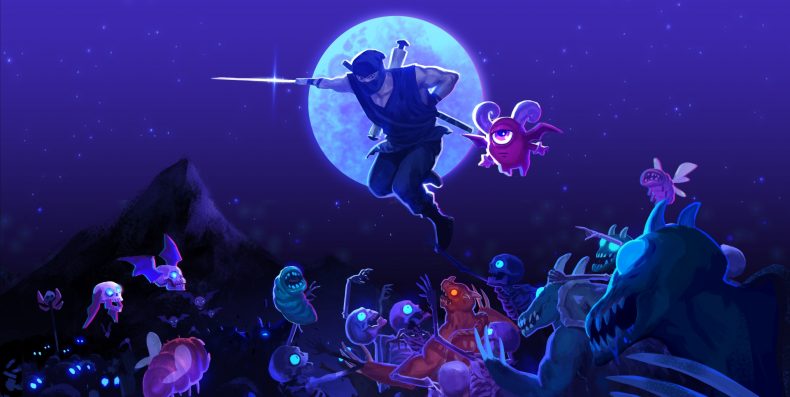 At first glance, The Messenger doesn’t appear to be anything all that special. Retro-styled 2D scrolling platformers are ten-a-penny these days, and paying homage to classics like Shinobi and Ninja Gaiden will only curry you so much favour. But if you stick with Sabotage Games’ unlikely gem, you’ll find that there’s a hell of a lot more to it than immediately meets the peepers.

A characteristically basic plot exists primarily to catapult the action from hither to thither, but there nuggets of comedy gleaming within the roughage that elevate a simple storyline to something genuinely chuckle-worthy. Your nameless Ninja student is the only survivor when a demon lord assaults the Earth, and it falls to them to carry a sacred scroll to the peak of a distant mountain. The hows and whys aren’t revealed to the Ninja, let alone to you, but needless to say it involves an awful lot of jumping, ducking, and slashing.

Initially it’s a fairly simple platformer. You navigate increasingly difficult stages with a limited repertoire of moves, but the platforming is some of the tightest I’ve ever experienced. The controls are beautifully responsive, and the levels are impeccably designed to ensure that you always feel as though you’ve just managed to stick the landing. It creates an exhilarating atmosphere for something that, at least to begin with, is fairly rudimentary. Pretty soon the enigmatic mystics who have charged you with the quest begin to make regular appearances, not least the Shopkeeper, whose transdimensional store is the hub wherein you buy upgrades and unlock new abilities. The first of which is a pair of climbing claws that allow you to scale most walls, but you’ll soon pick up a wingsuit, throwing stars, and rope dart (which the Shopkeeper jokes will just end up being called a “grappling hook” anyway). Double-jumps can only be performed after a strike, either on an enemy or a boost point such as a lamp, gargoyle head or candelabra (depending on the stage). In order to navigate each level, you’ll need to learn to link all the moves seamlessly and smoothly. For the most part, panicking and haste will send you hurtling back to the nearest checkpoint, whereupon your weird, passive companion, Quarble, will drop some fourth-wall-breaking wisecrack about respawns or some such and bring you back to life at a cost of set number of collected coins. It’s not exactly Dark Souls-level punishment, but it at least acts as a wrist-slap when you screw up.

You’ll make your way across twelve 8-bit stages, facing an increasing number of enemies and some cool boss fights (my personal highlights were the Cloud Dragon, and the tag-teaming Ogre brothers Colos and Suses). My only real complaint with the bosses is that, while they’re all very different from the next, they rely heavily on trial and error. There’s always a checkpoint and health refill in the room before them, so Sabotage expects that you’ll learn by dying. Each boss is a multi-stage fight, and with no health pickups or potions to use during the fight, the key to victory is to master each stage of the fight until you can get through them without taking damage and reach the final, toughest stage, which is usually when the boss starts flashing red and begins to throw everything at you in rapid succession. If this was the entire game, for a solid 8-12 hours, I’d have been thoroughly satisfied. In fact, as I finally beat down what I thought was the final boss after nearly 30 straight attempts, I sat back to watch the ensuing cutscene, chortling at the humour and revelling in what I assumed was the final twist, only for my Ninja to suddenly be called upon again, and immediately thrust into a shiny new future version of the world.

Without spoiling too much, at this point The Messenger suddenly becomes a Metroidvania. The upgrade tree increases, the music shifts from NES-era chiptunes to something more consistent with early-nineties action games. The move-set remains the same, but the world and all the enemies are re-imagined in sharper, more detailed resolution. After a genuinely funny joke about being given a map, you’re suddenly able to navigate a semi-open world, unlocking new areas to collect a handful of ancient artefacts. What’s more, you’ll stumble across time time bubbles that morph the world back into the previous version. Switching between the worlds is essential for clearing obstacles and opening up new routes, which lead to more coins and more upgrades. It’s a brilliantly surprising turn of events, and one that had me not only shocked but utterly impressed with the developer. It’s an incredibly risky move at such a late stage in the game, but at the exact moment I felt The Messenger was preparing to out-stay its welcome, everything changed and I was hooked all over again, desperate to see what the whole world looked like and dying to know what would happen when I finally reached the end.

Make no mistake, The Messenger is an incredible achievement that marks Sabotage Games as a studio to keep a close eye on. They nail almost everything, from the incredible visuals (in both 8- and 16-bit) and nostalgia-inducing score to the millimetre-perfect platforming and tongue-in-cheek, knowing humour. There’s a chance the trial & error nature of the bosses will put off some people, and the run-time is certainly long for the genre, but The Messenger is a staggeringly good game and a shining example of a big risk paying bigger dividends.

Make no mistake, The Messenger is an incredible achievement that marks Sabotage as a studio to keep a close eye on.