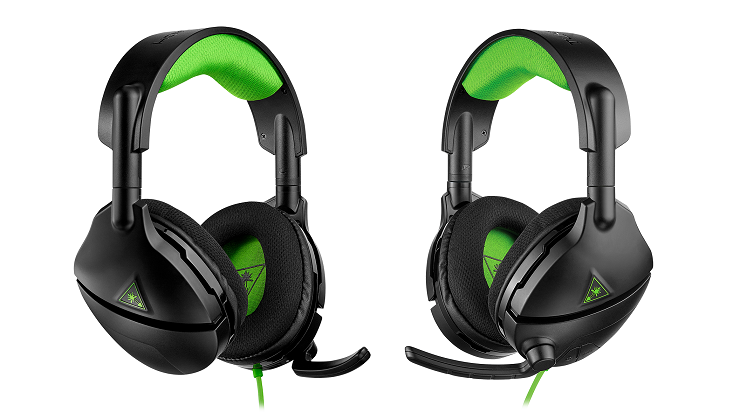 As a simple fella with simple needs, most of my decision-making when looking for a new headset comes down to a few key points: does it fit my head, does it cost a fortune, does it get the job done?

As a general rule, I find that Turtle Beach usually tick my boxes with their mid-range models, and the Stealth 300 is no exception. For a start, they’re more comfortable than most headsets I’ve used thanks to the glasses-friendly cushioned cups. I used them for a few hours at a time while reviewing them and barely felt the need to fidget at all.

They’re also pretty lightweight and look good. They aren’t as stylish as some of their more expensive stablemates, but they’re compact enough that you might just get away with them on the bus in the morning. The mic folds up against the left cup when not in use, which is a cool feature and a nice alternative to a removable mic.

The 3.5mm jack means you can also use the Stealth 300 on pretty much anything, including the entire range of gaming systems. I tested it on my PS4, Switch, Kindle and laptop, and they performed equally as well on each device. I had no problems with voice chat on my consoles, and the sound remained clear the whole time. If there’s a feature that lets the headset down, it’s that you have to charge it before use. The battery life is decent, but it seems odd to need to pre-charge a wired headset. Usually you can just plug in and go, and the headset is hardly tech-intensive, but that’s the rub.

There’s a nest of buttons and dials on the left cup to adjust inputs and outputs. The biggest problem is that they’re all bunched up together and it’s hard to tell what you’re adjusting. I kept turning the volume all the way down whenever I tried to change the sound profile, which was seriously annoying.

As to the sound profiles, I couldn’t really tell much of a difference between the four settings – to the point that I’m not 100% certain which one I settled on. I just went for the one with the most bass as it seemed the most viable option for gaming. There’s a mode to boost bass, treble, or both, or the standard mode that balances them. It’s pretty basic stuff, but you might have a different experience to me.

When balanced against pricier models, the Stealth 300 does enough to stand on its own. The compact design and comfortable fit are plus points, and I can’t knock the overall sound quality in any way. But the need to charge the battery, and those user-unfriendly buttons, will be irritating for some. Still, for price, quality, and versatility across your devices, it’s an easy headset to recommend.

The headset is comfortable and compact, but the need to charge can be frustrating.