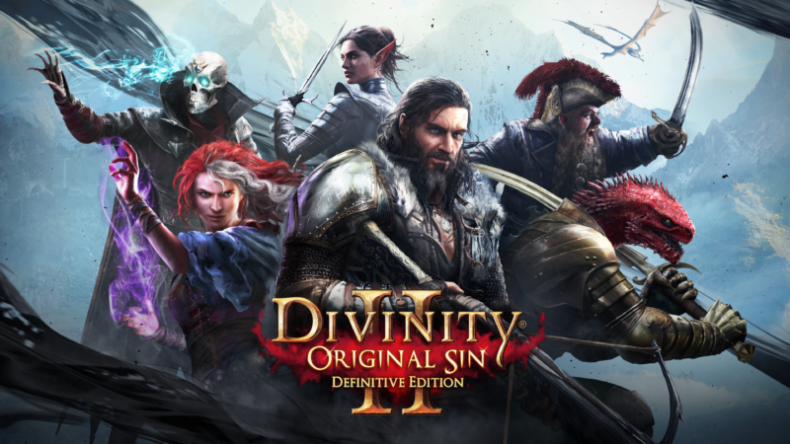 Divinity: Original Sin 2 lets you know it means business in the first few minutes of its story. Waking up tied to a surgical bench aboard a prison ship transporting “Source-users” (that’s mages, essentially) to the ironically named Fort Joy, your avatar is immediately faced with the first of a growing stack of choices: follow instructions and leave the room, or explore a little first. If you take the latter, this area acts as a tutorial of sorts, familiarising you with the basic commands and giving you a subsequent series of choices involving a prisoner in the hold and the guard watching him. Suffice to say, these early choices are really just a taste of things to come, but I was hooked right away.

But I’m running ahead of myself. The very first choice you make in the game is a pretty huge one, as you’re faced with the expansive character creator. You can, if you wish, choose from any of six pre-fabricated characters with their own established “Origin” stories, which serve as extensive subplots to the primary narrative of your rise to become the next Divine, a kind of magical Messiah. The five you don’t choose become potential companions on your subsequent quest.

They’re a mixed bunch, but they’re all utterly brilliant. There’s Sebille, the psychotic elf who seeks revenge against the slaver who disfigured her, or the Red Prince, a haughty Lizard warrior who wants to reclaim his throne; Ifan is a former hero turned assassin, while Lohse is a conjurer possessed by a demonic spirit. Finally, there’s Beast, a dwarven sea captain who’s cousin is a tyrannical queen, and Fane – an undead Eternal who’s so distanced from humanity he’s essentially a sociopath. You can select a starting class, plus associated skills and traits, but the stories and appearances remain the same. Alternatively, you can create your own unique character from four races and undead variants of each (equalling eight options), and then adjust their looks and choose a name. From there it’s into the sprawling skill system, as you alter attributes (the usual Strength, Intelligence, Finesse, etc…) and pick a starting class. You can alter this as you play, so it really only determines your initial skills and weaponry. It’s the talents, social and combat-based, that really change the game.

For example, Pet Pal is a social talent, which allows you to talk directly to any animal in the game, including some that would be enemies otherwise. Dungeon rats might give you clues to escape routes, while whole mini-quests revolve around conversations with cats and dogs. Then there are talents like Scoundrel that allow you backstab and pilfer, or Polymorph, which literally lets you turn enemies (even bosses) into chickens. Further to this are skills that grant buffs to your character and the party, such as Leadership or Thievery. It’s a deep system, and one that will require a fair amount of scrutiny to get the best of.

It’s aided by a unique skill system that requires you to spend points in a character’s Memory attribute to allow them to learn more skills associated with their chosen creeds. Say, for instance, you have points in both Pyrokinesis and Scoundrel; if you want to go the sneaky route exclusively, you’ll need to unlearn your fire spells to free up slots. Or you can split your memory slots evenly and, I don’t know, chloroform an enemy before setting them on fire. Different elements combine with varying effects during combat, so you can ignite oil patches, or freeze and electrify characters standing in puddles of water. You’ll spend as much time trying to sneak or talk your way out of combat as you will fighting, but the enemy encounters are often exhilarating affairs that marry elements of Dragon Age: Origins and Baldur’s Gate. Turn-based and tactical, combat is complicated and challenging in Divinity Original Sin 2, even when you’ve passed the 15 hour mark. There are so many skills, spells and elements to consider, along with distance to enemy, status effects, terrain, and elevation. An Ability Points system limits your movements and actions, and forces you to consider every turn carefully and, where possible, plan ahead. Even on Classic Mode battles can be trying, let alone Tactician Mode (which comes with an permadeath option, natch), and you’ll want to make friends with the Quicksave as early as possible.

The environments are sprawling, multi-levelled areas shrouded in the classic Fog of War. Because there’s no clear path through the game and very little signposting, it’s easy to stumble directly into a fight you’ve no chance of winning. The Autosave is sparse, so if you’re not careful you can lose a fair amount of progress by blundering around too hastily. That said, you will want to explore. Secret caches, chests, bodies, buried treasure, caves, and various other reliquaries hide gear and loot that might prove essential to your quest, or even unlock new ones.

All this choice and variation does take its toll, however. Larian has done their best to cram a keyboard’s-worth of controls onto the gamepad, but it’s an occasionally clumsy translation. A mouse pointer forced onto a thumbstick is never a good look, and the heap of menus can be tricky to navigate quickly. I’ve seen better examples in titles like Dragon Age that don’t make you feel like you have too many thumbs and not enough fingers. Performance-wise, Divinity Original Sin 2 can sometimes push the PlayStation 4 quite hard. During larger fights while it calculates the AI of half a dozen or more enemies and all their associated skills and effects, the frame rate can stutter. Bright magical explosions and screen-filling special effects might look pretty, but they occur with such frequency that the system can’t always keep up. For that matter, neither will most gamers, as it can be easy to lose track of who’s where when the floor is covered in poison, fire, and frost.

One thing you wouldn’t expect to work as well as it does is the multiplayer. The new Arena Mode is a fairly unique idea in the genre, and let’s you battle through over a dozen maps either alone or with other players. You choose from 16 premade characters found in the campaign, such as the enigmatic elf Sourceress Malady, all of whom have their own skills and abilities. It’s a fun mode that adds an entirely new dimension to the game and, oddly, doesn’t feel as disjointed as you’d expect.

Alternatively, you can also play the campaign cooperatively either online or, wait for it, in solo screen. It’s drop-in, drop-out, and anyone joining you must be assigned one or two of your companions to control. Obviously this allows for more tactical play, as you coordinate attacks and moves to defeat your enemies. It’s easy to overlook the majority of Divinity 2’s shortcomings because what it does well, it does incredibly well. I struggle to remember a game of this scope and with this much dialogue that’s so consistently well written and acted as this. There’s a vein of sardonic humour running through the whole narrative, riddled with in-jokes and Easter eggs, and peppered with self-aware black comedy. Likewise, the sheer number of consequence-heavy choices and narrative tangents is truly impressive. I mean, you can literally kill anyone you meet if you choose to – though I wouldn’t advise doing so unless you want to make the going decidedly uphill.

Put simply, Larian studios have created an absolute belter, and despite a handful of caveats the crossover from PC to console is a resounding success. Thanks to the likes of Pillars of Eternity, Sword Coast Legends and, of course, this game’s predecessor, there’s no shortage of party-based tactical RPGs available on console these days, but I’d confidently champion Divinity Original Sin 2 as the best of damn good bunch.

One of the best PC RPGs of recent years loses a little of its shine on console, but remains a fantastic experience throughout.

You may also like
divinity: original sin 2Larian StudiosReviews