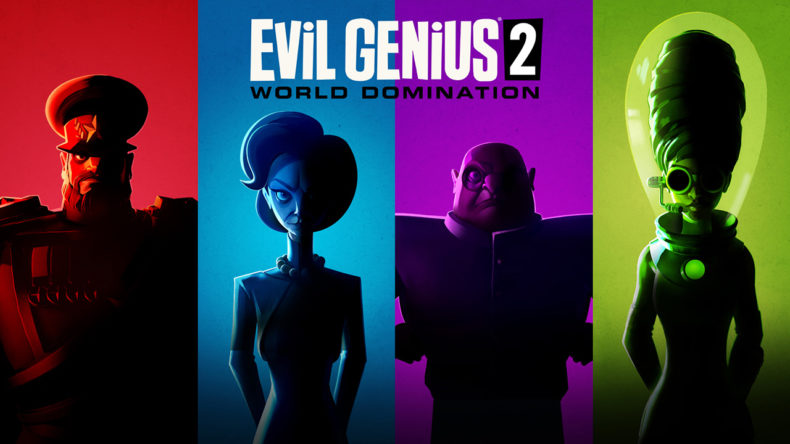 Sometimes it’s nice to be the bad guy. Society is always on at us to be pleasant and polite, to pull out chairs for people and, gods, smile at everyone all the time – so it’s nice now and then to get to be devious and scheming just for fun. Which is where Evil Genius 2: World Domination comes in, as Rebellion’s base-building strategy game just wants you to be nasty all day long.

Here’s the thing, though – I never really felt all that evil throughout. I mean, yes, there’s an option to literally walk up to any of your minions at any point in the game and shoot them in the head – but this felt a little OTT to me, especially as the prisoners you capture throughout are pretty much either tickled or scared during their interrogations. If you’re only really evil to the people who work for you, that doesn’t require much genius.

But I’m ahead of myself, here. Let me first establish that I really like this game. Since Dungeon Keeper, I haven’t really played a lair-builder that I enjoyed. Evil Genius 2 scratched an itch I didn’t know I had, offering so much choice and colour and freedom to create the kind of lair supervillains dream of. 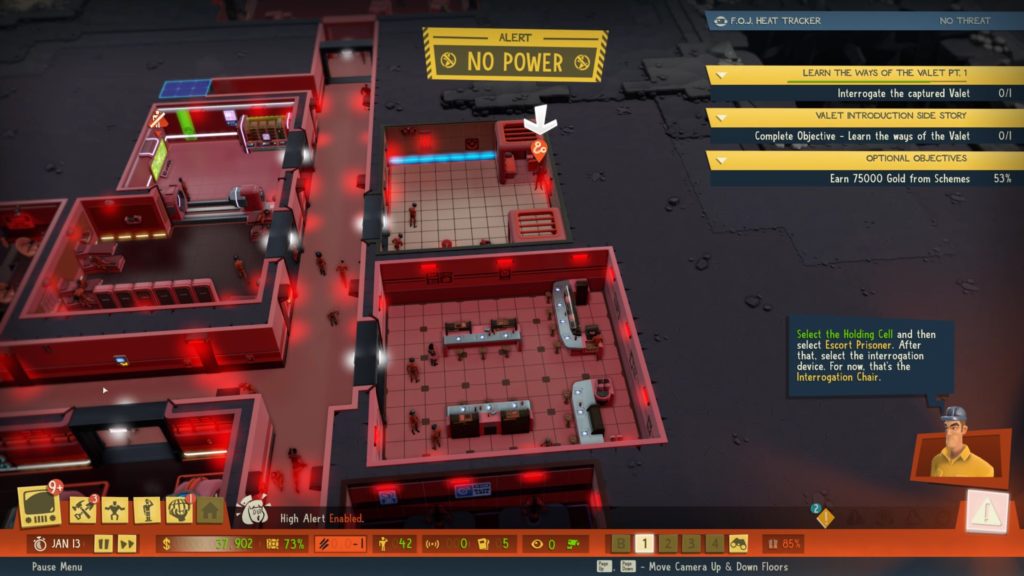 There are four playable characters, although aside a handful of dialogue lines, their gameplay doesn’t vary all that much. You can choose from Dr. Evil lookalike Maximilian, ex-spy and Thatcher stand-in Emma, Brian Blessed’s imposing Ivan, or sophisticated psychopath Zalika. There are also three islands to choose from on which to construct your new base. And wow, do they give you a lot to do.

The tutorial took me two and half hours, and I still went into the main campaign a little ginger about what was what. The basic rooms are available to you immediately, and depending on the difficulty you choose you’ll start with a small supply of cash and minions. From here, you’ll be constructing a super-base behind the facade of an off-shore casino, which you can also deck out with various gaming tables and distractions to maintain your illusion.

Usually, the first thing you’ll need to do is build yourself an Inner Sanctum, which is used to soothe your Evil Genius and improve their mood. But you’ll also need to take care of your minions by building a barracks, a mess hall, and a staff room. You need a training room to train guards, scientists, technicians and valets – but of course you’ll need to go out into the world and kidnap one first so that you can learn the secrets of the trade. 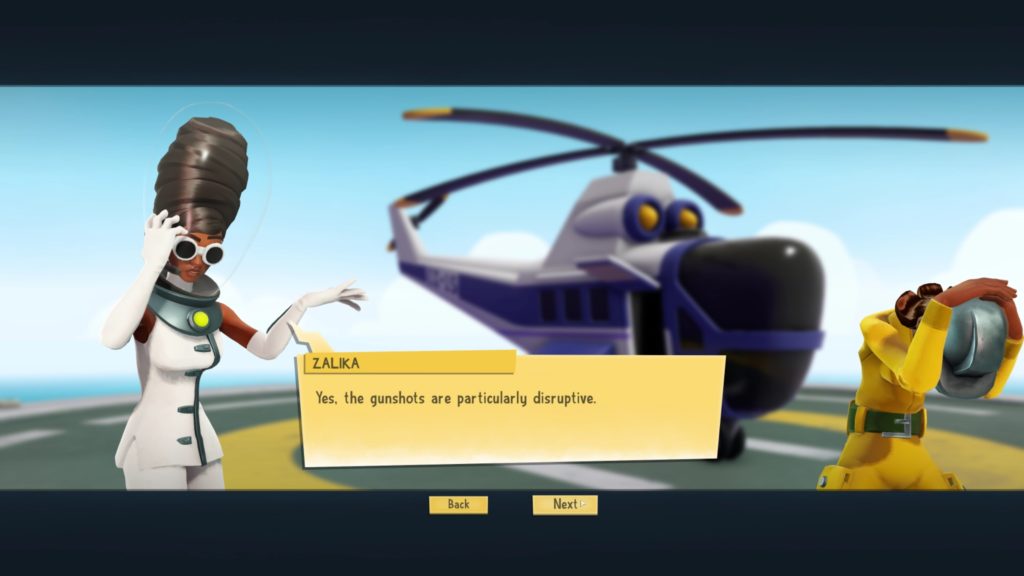 It’s this global focus that males Evil Genius 2 feel more modern and involving than its predecessor. On the World Stage you’ll need to scout other countries, and establish criminal networks that not only allow you to kidnap the necessary specialists, but run schemes to bring in money and, crucially, lower your heat with the Forces of Justice, a bunch of pesky do-gooders intent on bringing you down. The world is a big place, and running multiple schemes requires multiple networks, which in turn requires a lot of broadcast strength. This means more computers, which means more power, which means more technicians to maintain your lair. It doesn’t take long for the list of main quests and optional objectives to begin to snowball.

Guards, guard-stations, traps, security cameras and an armoury are all essential to the security of your island, while you’ll also build a vault to store your millions and a lab to research new advances, allowing you to, for example, build stronger doors. There’s so much going on all the time that it’s easy to feel overwhelmed, even on lower difficulties, but most of the time you just need to take a breath and deal with everything as it comes, one thing at a time.

Of course, this isn’t helped by a timer that counts down to the next incursion by the F.O.J, who will often send multiple operatives to sabotage your empire. At this point you’ll need to trigger a red alert and capture, kill, or distract your intruders. You’ll have to learn the weakness and strengths of each agent type, and act accordingly. 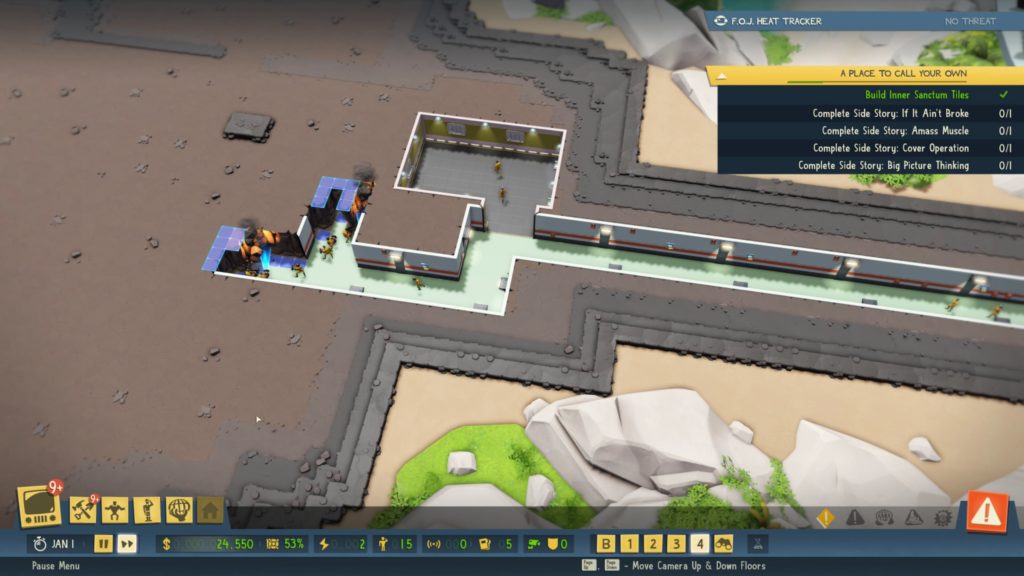 The actual building is a ton of fun, though. It’s simple and intuitive, and your minions will hop to the designated task immediately, carving out the space in the bedrock and then fetching the necessary items from the storage facility. Moving placed items is also easy, so don’t be afraid to expand if you need to. Having everything you need is essential to your longevity, and if your minions aren’t working fast enough you can control your Genius directly, placing them near the slackers and activating an “inspirational” aura. Weirdly, they don’t react if you opt to execute one of them in the mess hall, just for funsies. Really though, you should be looking after them. They work quicker if they have somewhere to eat, sleep, chill out and recover, and the faster they work the quicker you can start to realise your diabolical visions.

I do have a few reservations, though. For a start, your minions have almost zero AI, and it will even take designated guards a while to react to intruders, while hungry technicians will sit at food counters that are literally about to explode. The intruders themselves all look the same, too; male and female versions of the same archetypes that looks a bit distracting when four or five are invading you at once. I also think some balancing is needed in regards to things like power consumption – I got really sick of hearing that my base was under-powered, despite having an absolute shit-ton of power generators. The dialogue scenes I’m also not a huge fan of, as they usually just show the minion looking wretched and the Genius pointing without facial animations to match the dialogue. It’s all a bit weird.

My gripes are pretty minor though. Evil Genius 2: World Domination looks and plays wonderfully well, and you’re never without objectives to focus on, schemes to oversee, rooms to expand, agents to interrogate or minions to punish for walking too slowly. At a certain point you’ll start to recruit henchmen and build a circle of trust to be deviously proud of, while expanding your criminal empire across the globe.

Anyone who ever dreamed of being the villain instead of the hero and building an island base to rival Dr. No or Syndrome should give Evil Genius 2 a fair shot. It’s not without a few faults, but it’s amusing, good-looking, crammed full of things to do and build, and will keep you scheming and creating for hours.

Anyone who ever dreamed of being the villain building an island base to rival Dr. No should give Evil Genius 2: World Domination a fair shot.

You may also like
evil geniusevil genius 2: world domination