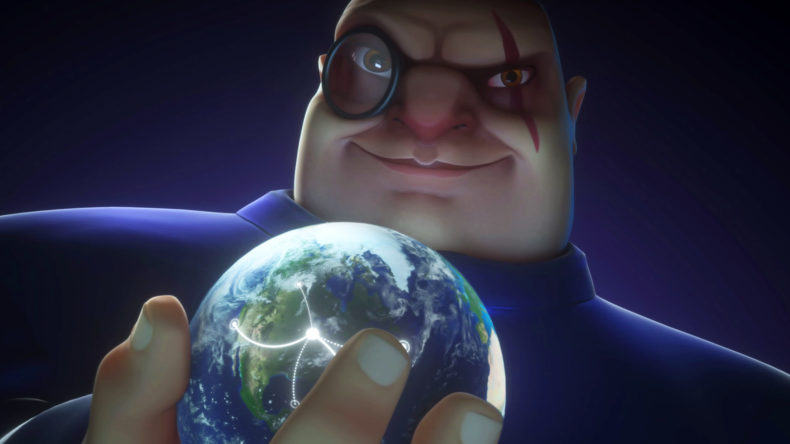 Even having never played the first Evil Genius, I knew the kind of experience I was in for with the sequel within just a few minutes of booting it up. This is Dungeon Keeper by way of The Incredibles, in which you play as an OTT supervillain complete with an island hideout, legions of dutiful yet expendable minions, and an array of weapons and gadgets with which to repel the advances of the “good guys”, which in Evil Genius 2: World Domination are represented as the secret agents, spies and investigators of the Forces of Justice, who are hell-bent on taking you down.

So it’s lair management, then, with the usual heaps of humour and colour, and a ton of imagination that allows you to live out your most diabolical evil fantasies including kidnapping, torture and world domination. Before you scream outrage, though, I should inform you that most of the torture involves foot-tickling and such – although it still results in the unlucky victim in a zip-lock bag waiting to be carted off to the secret agent compost heap. 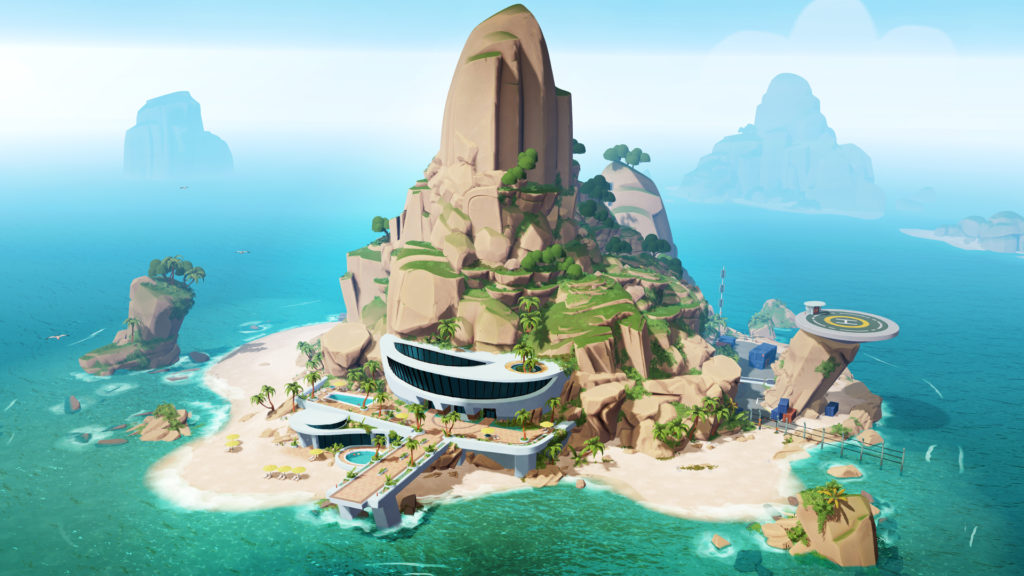 In the preview build I had access to the main playable antagonist, Maximillian, although the full game will feature three others including Ivan the Red, voiced by the legendary Brian Blessed. While you’re technically playing as the villain themselves, you take the role of a disembodied, all-seeing entity that can move around the complex at will, assign roles to your minions, build rooms and install equipment. You can even move your villain around, opting to increase productivity speeds in certain rooms simply by having them stand there giving the side-eye to their minions.

As in the first game and indeed other games in the stable, your first job will be to begin construction on the lair. This means constructing specific rooms like a Vault, a barracks and mess hall for your minions, and a lab to research more and more evil creations. You’ll train minions to take on different roles such as guards and scientists, while building a mini prison, and laying traps throughout your corridors to catch any snooping agent or spy who comes sticking their nose into your business.

While it’s quite relaxing to watch your minions schlepp back and forth performing menial tasks, the successful villain is a proactive villain, and you’ll want to be building and researching at all times. Mostly this will involve clearing space and watching your minions dig it out before buying items. In the demo build a lot of stuff is already available, which may need to be researched first in the full game. One thing I will say though, is that you can never have too many generators. Even with two power rooms and 8 generators running, I was constantly running out of power and needing to build more. 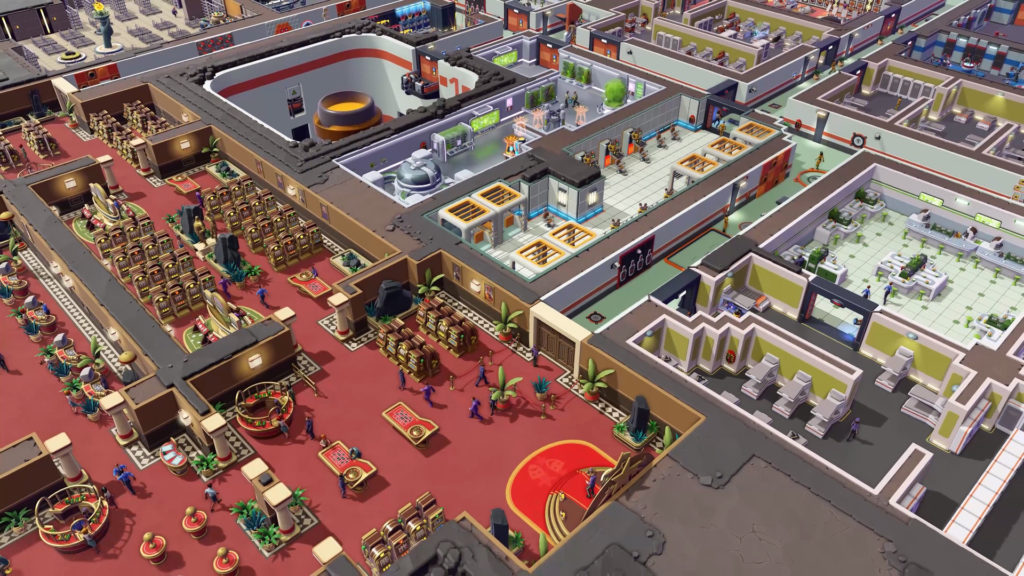 Outside the lair you can visit the World Stage, where you can assign minions to Schemes that bring in a steady revenue of gold, or even send them to kidnap specialists who you can then tickle torture for information in order to train your own or unlock new research. An ever-expanding list of optional objectives, Side Stories (which usually introduce new specialists and research), and primary goals keeps you moving and building.

While there’s no “war” state, you will be defending your base against incursions by spies and agents, or groups thereof. You’ll need to build traps and assign guards to take them out quickly and quietly before either terminating them or interrogating them first. The life of an international supervillain is rarely a quiet one, and Evil Genius 2 certainly gives you an awful lot to focus on – though the tutorial does a good job of explaining everything.

Interestingly, this is a preview build rather than an early access release, and its current state gives me a lot of confidence for the finished product. The aesthetic is clean and colourful, with the ability to zoom right in or out to inspect your minions or the island itself. The art style has a definite sense of The Incredibles, with bright cartoony visuals and exaggerated movements. Perhaps because of the preview build, there were sound effects I expected to hear but didn’t, such as indicators of when you’ve picked an item up or dropped it, or entered and exited certain menus. It might be that these sound effects will never exist, but I feel they’re needed to give some sense agency – especially for those gamers who maybe rely more on sound effects to navigate through game menus. Likewise, some of the dialogue didn’t always trigger during the mostly static dialogue screens between Max and his minions. 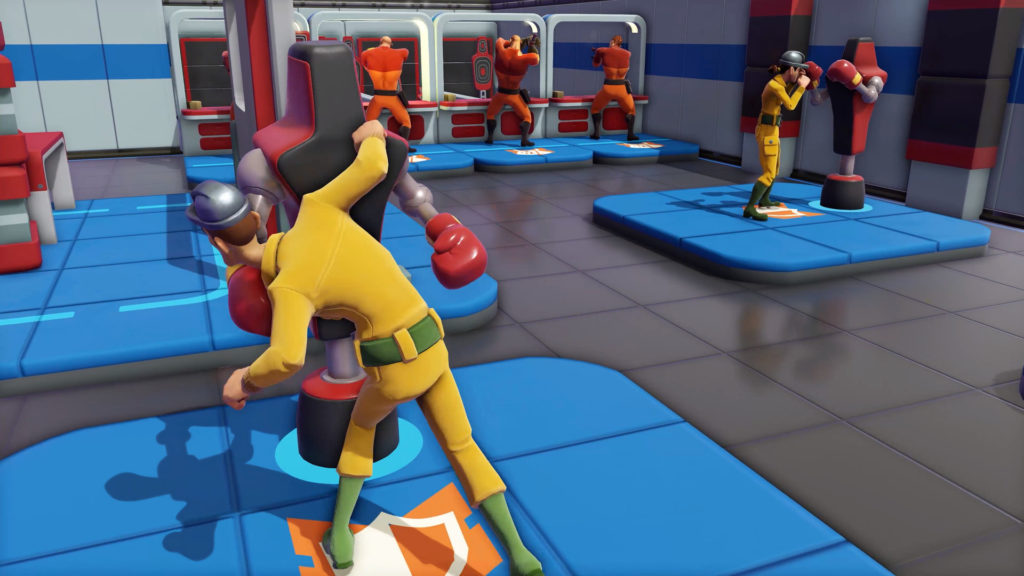 That being said, the preview build is pretty stable, running smoothly and not crashing or stalling at all. I did, however, encounter a bizarre bug that wouldn’t allow me to open the Save/Load menu without using a controller.

Evil Genius 2 has the potential to be a lot of fun. Sending out minions on Evil Schemes gives you something to constantly monitor, while building and expanding your lair through level upon level of labs, vaults, training rooms, secret prisons and communication arrays. It doesn’t have quite the same level of casual cruelty as, say, Dungeon Keeper where you can smack your imps around and sacrifice them for funsies, but it’s a deeper and more involved game than many of its stable mates – and one I’m sure will have everybody stroking white cats while laughing maniacally at come the full release.

Senior Content Editor Mick has been playing games for over 30 years and writing about them for around 12. After drifting from site to site for a while, settling briefly at the now-defunct Made2Game and freelancing for the gone-but-not-forgotten NintendoGamer Magazine, he came at last to rest at Godisageek. Mick has been a reviewer, staff writer and content editor here for some time, while also moonlighting a little for Red Bull Games. He has 4 kids, has written 2 novels, and sometimes even manages to pay a bill or two. You'll usually find him defending the galaxy in Destiny 2, battling evil in Diablo 3, or lurking in the background on Twitter. Find him there @Jedi_Beats_Tank, or on XBL (JediWaster247), PSN (Jedi_Waster) or Nintendo (JediWaster).
MORE LIKE THIS
evil genius 2evil genius 2: world dominationPreviewRebellion Developments