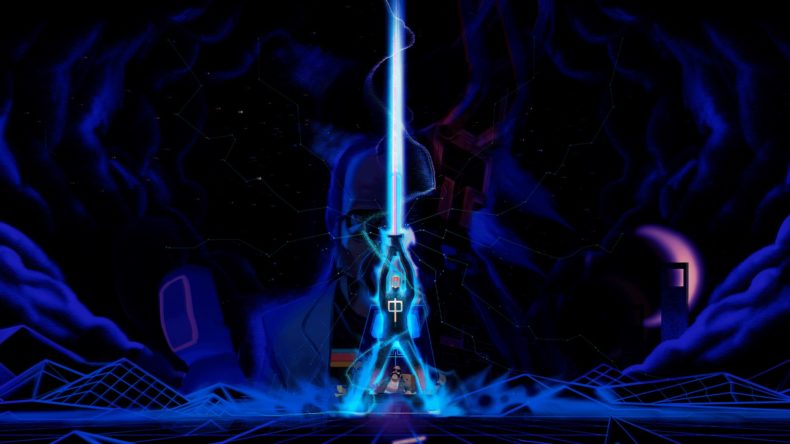 There’s a sense that either Narita Boy thinks it’s very, very clever, or that it’s all been written with tongue firmly stuck in cheek – and I can’t decide which it is. On the one hand its obtuse, jargon-filled dialogue almost feels like parody, but then the poignant moments it seeks to conjure in between levels are at odds with the idea of comedy. After this long with the game, I’m still confused.

Either way, it tells the story of a teenage hero plunged into a virtual world to save the Creator of the game in which he’s trapped. It means an epic quest through multiple worlds and the need to seek out the Creator’s lost memories, which themselves tell the tale of his childhood and early life in Narita, Japan. 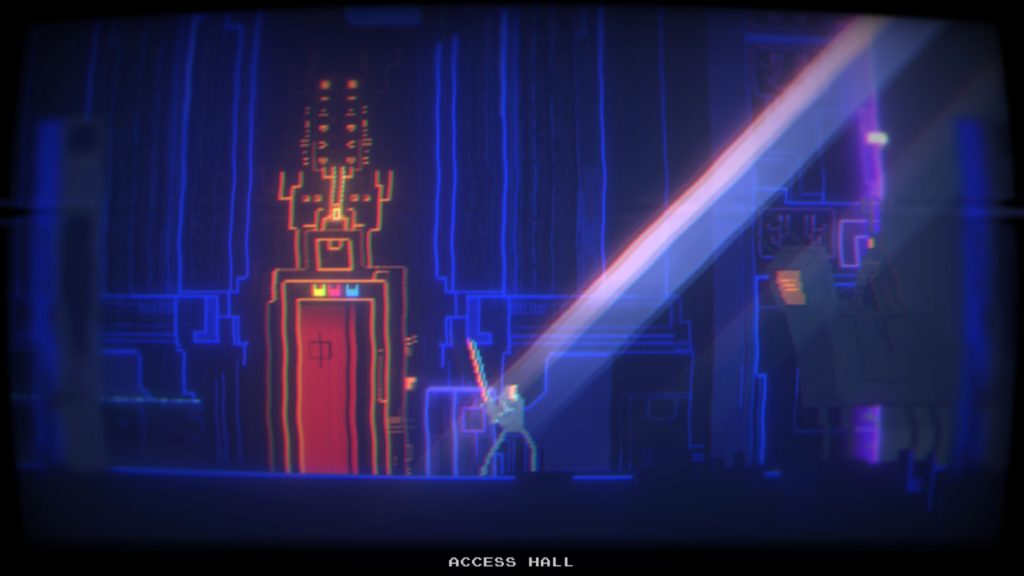 The crux of it all is the Techno Sword, a powerful legendary weapon that allows Narita Boy to carve his way through hordes of evil pixels and towering bosses, and harness new powers to unlock previously impassable areas. It’s very Metroidvania-like, although a lot of the backtracking is through short, closely-spaced areas, which makes it feel more like busy-work than most games of its type. One section early on sees you schlepping back and forth between about five or six rooms and it’s not tedious, exactly, but it’s not much fun either.

Which is not to say I didn’t enjoy Narita Boy. In fact it’s a hard game to not love, given its incredible artwork, blistering synth soundtrack and abundance of heart. That this was a Kickstarter project comes as no surprise; you can clearly see and feel the passion and effort Studio Koba has put into the development. The biggest issue here is that so much of what’s going on, story-wise, was lost on me. The only bit I really understood was finding the Creator’s memories, and even then I couldn’t at first understand why that was the main motivation. 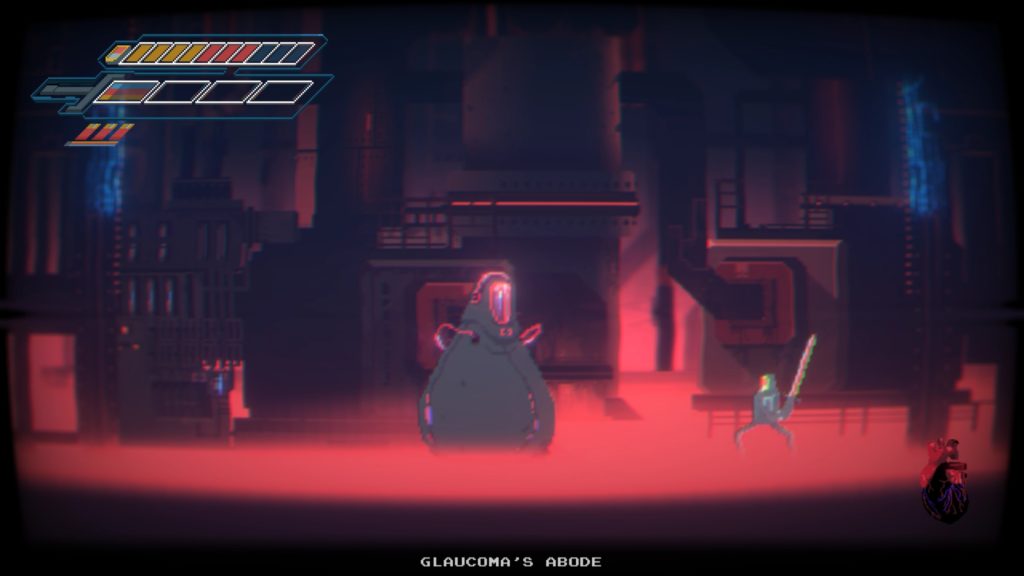 Bear in mind that at certain points of this game you’ll become a techno-stag and gallop through a pixel forest, and take techno “dudes” into your being that you can summon to clear the screen or otherwise aid you in tough situations. You’ll battle enemies like Lord VHS and the Black Rainbow in arenas that look like psychedelic 80s album covers. Narita Boy is a busy game, which keeps the pace up and atones for some of the laborious backtrackery.

Both combat and movement are fluid and satisfying. Tying together shoulder slams, dodge slides, and uppercut swings is fun, while traversing the levels has a rolling rhythm to it that makes it all wonderfully addictive. I just wish there was a map. If Carrion taught us anything it’s that a Metroidvania without even a rudimentary map is hard work – especially when so much of it looks kind of the same. I don’t mind charging back and forth to solve visual code puzzles and find Techno-Keys to progress, but I don’t like not knowing where I’m going or where I’ve been. 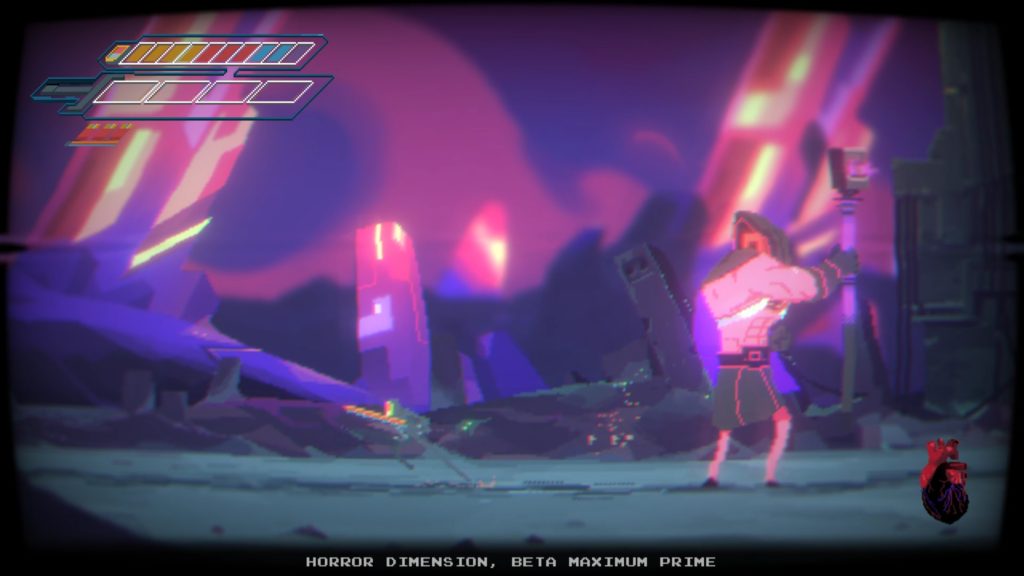 That said, you’ll often know you’re going the right way because someone will start talking about a boss (mostly known as “Stallions”). Narita Boy is full of bosses, and while most aren’t overly taxing, each took me a few attempts to get the feel of. A few of them are really cool, but most are a variation on “dodge-slide, attack, jump, repeat”. This isn’t a bad thing, though. In fact it’s nice to just be hampered by a few failed tries before moving on, as opposed to each boss being a solid wall of bastard-hard difficulty that takes longer to beat than the whole world leading up to it.

Some of the areas you’ll traverse are stunning to look at, and small puzzles keep your brain working through the pretty constant combat. The Techno Sword is like a lightsaber, swishing and fizzingf back and forth, and while it’s easy to misjudge a slide and take damage, you’ll soon get the hang of the rhythm. It throws a multitude of enemy types at you, from hulks that fire lasers you’ll need to dodge, to armoured skeletons with shields that need shoulder-slamming. Even when you’re dying though, Narita Boy remains endearing.

There’s a lot to recommend here. The difficulty is balanced well enough to offer challenge without frustration, and the combat is sublime, offering you new power-ups and special moves at a steady rate. It’s a shame there’s no map and the dialogue could stand to be a little less forcibly nerdy, but overall Narita Boy is a hugely enjoyable adventure that proves that even in this dreary modern age, Techno isn’t dead yet.

Excellent combat
Incredible soundtrack
Look how gorgeous it is!

Narita Boy's difficulty is balanced well enough to offer challenge without frustration, and the combat is sublime. Not to mention it's visually incredible.