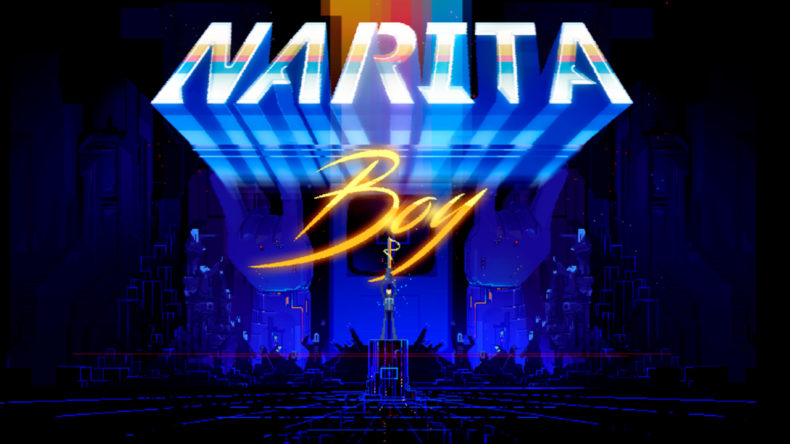 The things they can do with pixel art these days are pretty amazing. What was once upon a time the only real option for game developers, is now a an artistic choice that yields some of the most beautiful and creative worlds available. Narita Boy falls squarely into this category, presenting a stunning world set inside an 80s indie game.

Early impressions of Narita Boy are that, while it’s gorgeous and super satisfying to play, it’s also confusing both in its map-less layout and its jargon-heavy narrative. I find a lot of the writing confounding as characters throw place names and terminology around that has little meaning even in context, and struggles to stick in the mind because it’s all so much text-based jibber-jabber. The first half hour or so makes a poor first impression, too, as you guide your protagonist (who is either a young boy playing the game, or sucked into the game, I’m not sure) from one babbling NPC to another until you find the fabled Techno Sword, a powerful weapon that allows you to fight off evil programs and uncover the boyhood memories of the Creator. 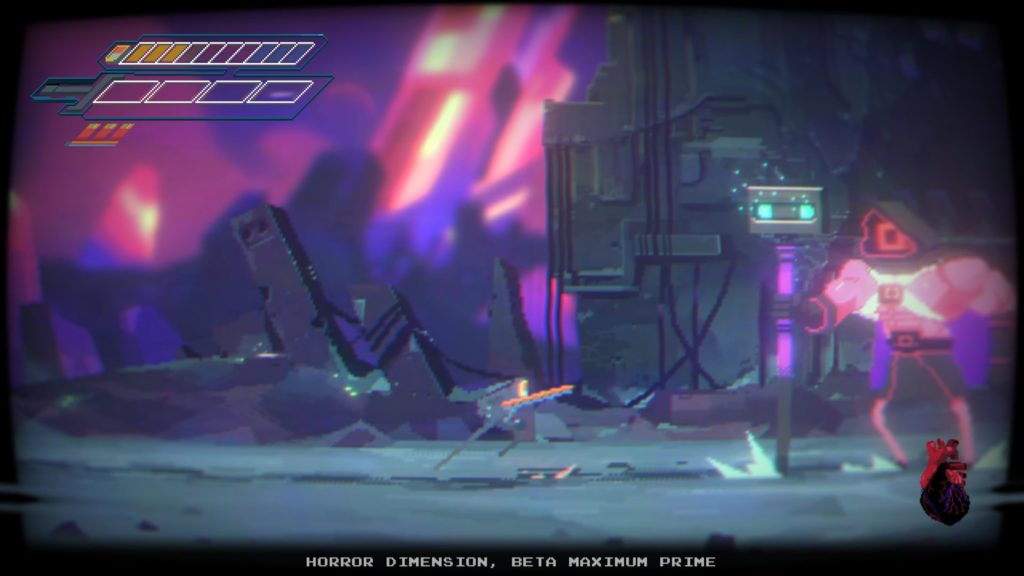 To call the story weird would be an understatement, and while Techno Sword is a hundred times better for a title than Narita Boy, the central premise of the game sees you diving into the Creator’s past, specifically his childhood in the Japanese city of Narita. So far I’ve not seen enough of it to see how it’s relevant, and even the bosses don’t seem to hold much of a connection to such elements. For example, the first one you meet is a giant gladiator called Lord VHS in a dimension known as Beta Maximum Prime, who seems to exist more as a joke on 80s pop culture than anything else.

As a Metroidvania it suffers because there’s no map, and I wasted a lot of time after first receiving the Techno Sword because all the arrows that had guided me still pointed to the eventual dead end I’d arrived at, and the game actually wanted me to backtrack almost all the way to the very beginning. An utter lack of signposting or real direction meant I had to run back and forth to find the right way, when a simple map would have made a major difference. 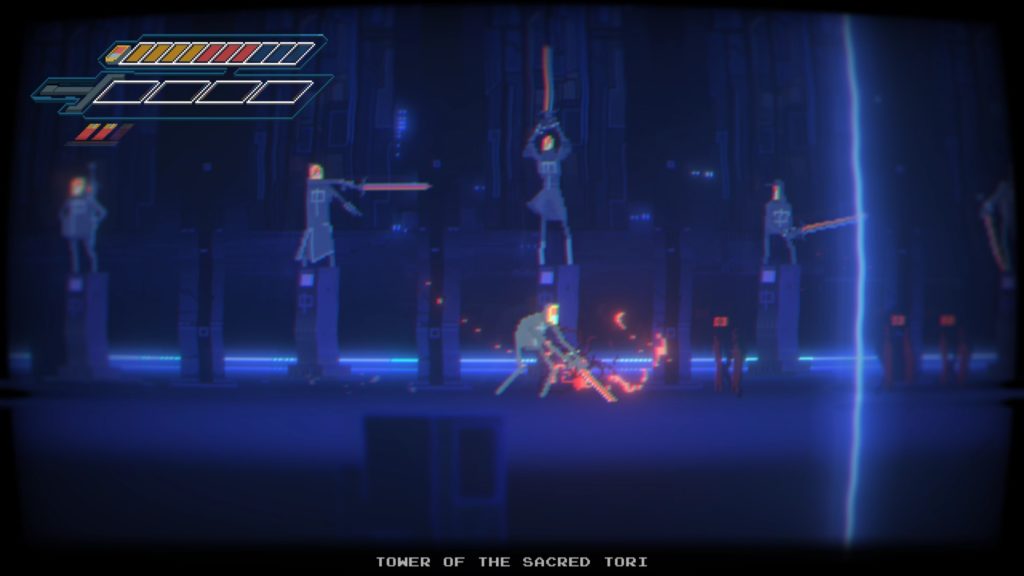 There’s a solid mix of mechanics though, with a sliding evade that can also boost you across wider gaps in the air, and the ability to climb certain walls or use the Techno Sword as a shotgun or focused energy beam to defeat enemies. Floppy discs unlock power-ups which, in classic Metroidvania style, allow you to backtrack and open previously locked areas, but it’s hard to follow where you’re going and why because the writing is so dense.

Right now the atmosphere and aesthetic of Narita Boy are more than making up for the confusing story and world, but how that balance will shift I can’t predict. Without a map or clear direction it may become frustrating as more and more impassable paths need remembering for later, while the already satisfying combat will only get better as more power-ups and options are unlocked. There’s an immense amount of potential here, but Narita Boy is one adventure that really could go either way.

Senior Content Editor Mick has been playing games for over 30 years and writing about them for around 12. After drifting from site to site for a while, settling briefly at the now-defunct Made2Game and freelancing for the gone-but-not-forgotten NintendoGamer Magazine, he came at last to rest at Godisageek. Mick has been a reviewer, staff writer and content editor here for some time, while also moonlighting a little for Red Bull Games. He has 4 kids, has written 2 novels, and sometimes even manages to pay a bill or two. You'll usually find him defending the galaxy in Destiny 2, battling evil in Diablo 3, or lurking in the background on Twitter. Find him there @Jedi_Beats_Tank, or on XBL (JediWaster247), PSN (Jedi_Waster) or Nintendo (JediWaster).
MORE LIKE THIS
KickstarterStudio KobaTeam17