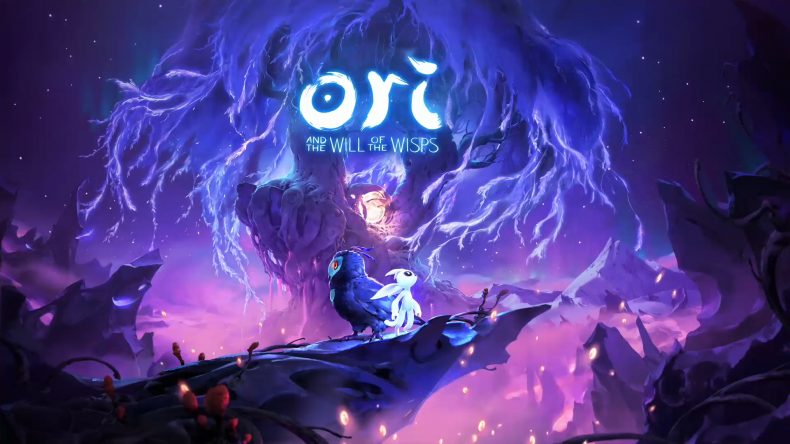 Some titles end up being so noteworthy for their unique style that they become synonymous with a whole new genre. We’ve had “roguelike” and “soulslike” and of course, there’s the infamous “metroidvania” genre. The latter is an oft-travelled one and is where Ori has been making a name for himself, focusing on nimble gameplay combined with great story and visuals. Whilst there’s clearly no need for an “Orilike” genre, there’s a certain style that feels familiar, almost unique to this plucky little spirit and its gorgeous world. It’s fair to say the superb Ori and the Blind Forest set a very high bar back in 2015. Ori and the Will of the Wisps manages to match it and throw in a few new ideas of its own.

The story begins centred around a new character, Ku, an avian friend of Ori’s. Due to its feeble wing, Ku dreams of flying through the skies but has never experienced it. An ingenious solution courtesy of the bird’s mother sees Ku and Ori fly out to the horizon, exploring new worlds from a fresh perspective. But then, disaster strikes, and Ku and Ori plummet downwards to a strange land. Ori must now journey into the unknown to find his lost friend. I won’t spoil any more of the plot because, like it’s predecessor, it can get a bit emotional at times. The story is cleverly expressed, often implying mood with character reactions or conveying it through lighting and sound. You’ll feel sadness and sympathy for those characters you’re rooting for, and maybe also those you’re not, thanks to the considered narrative and the restrained approach to its storytelling. The sombre, soft and deep tones of the narrator provide additional beats only when absolutely necessary.

The gameplay will feel very familiar to those who played Ori and the Blind Forest. Ori needs to run, jump and climb his way around sprawling 2D environments. Along the way, you’ll piece together more of the story Ori’s wrapped up in, and unlock new skills to help on your adventure. The movement feels slick and responsive, allowing for precise navigation around the dangerous environments. New obstacles you come across often seem insurmountable at first. However, thanks to an agile Ori and a bit of practice, there’s always a clear way through. Having Ori and the Blind Forest as its predecessor put plenty of expectation on the Will of the Wisps. However, it boldly embraces its sequel status and packs itself full of new features and ideas. Combat plays a much heavier role this time around, and you have a loadout of three skills mapped to the face buttons. Attacking feels responsive and well-balanced with plenty of options from melee attacks to ranged projectiles. You manage a passive skill loadout too that gives you various boons in your adventure. It opens up plenty of customisation options to suit your style. There are even combat shrines dotted around the place where you can further hone your skills. Upgrading skills is also less restricted than before without the constrained upgrade trees. Now, you can upgrade skills at any point as long as you have enough currency to pay for it.

This adventure is also much bigger than its predecessor, taking 12-15 hours to play through, depending on how many collectibles you want to find. There’s a much bigger environment to explore, but it doesn’t feel bloated or padded. Each area explores a few new gameplay mechanics and puts them, and you, to the test. They never outstay their welcome and can be very creative at times. The difficulty can also be tweaked across three different levels from the start. Players just wanting to experience the world and the story can now enjoy it. But there’s still enough for those who want a more serious challenge too. Aside from the fluid traversal, Ori games are famous for their gorgeous visual style and rousing, emotional soundtrack. Thankfully Will of the Wisps nails this area too. Not only does the world look detailed and full of life but even enemies and character models are finished with polish. The use of lighting is stunning in parts, with sunbeams cutting through trees overhead, or faint hues emitting from flickering sources. Despite being 2D, the use of background and foreground adds depth helping to bring the experience to life. The sound is sublime whether used delicately as ambiance or ramped up for tough boss encounters. The sound that supplements the story sections is equally emotional and considered, adding to those heartfelt moments.

In terms of performance, there were noticeable drops in frame rate at various points. Additionally, there were occasions where it would stutter to a halt as if it was catching up with itself. It wasn’t very helpful when it happened during combat or a complex jumping section. There’s a day one patch that promises to fix these issues, which it needs to because they’re very noticeable and distracting. The difficulty spikes from the first Ori title also make a return, causing the same short-term frustrations. But learning from your mistakes feels more pronounced here, and overcoming them rewards you with a sense of pride. There were also a couple of situations where moves mapped to the same context-sensitive input were required to be used consecutively. Sometimes the game confused itself with which one I wanted to do when. The result was a brief lack of control in an experience that otherwise feels incredibly tight

We all love this gaming medium because it provides us with escapism, entertainment, and above all else, fun. Every now and then a game comes along that doesn’t want to settle for just providing us with simple enjoyment. It pushes for something more, feeling like a rounded, carefully crafted experience. The various facets of sound, design, story, and movement all combine to a whole that works effortlessly together. Simple smiles or laughs become something more as you play, a feeling deeper within. Emotions like real joy, affection, sometimes even disbelief at what you’re experiencing.

Ori and the Will and the Wisps is one such game where superlative adjectives feel entirely justified. A glorious combination of heartfelt story, stunning visuals, soothing sounds, tight, fluid and responsive movement all contained within levels that feel inspired and packed with ideas. It’s bigger, brighter and more refined than its lofty predecessor. Despite occasionally falling on the weight of its more complex ambition, it delivers a remarkable experience that you’ll adore from beginning to end. Ori is back, and it certainly doesn’t disappoint.

Ori and the Will of the Wisps is a fantastic sequel. It builds on the original with a few new ideas to deliver a complete experience.