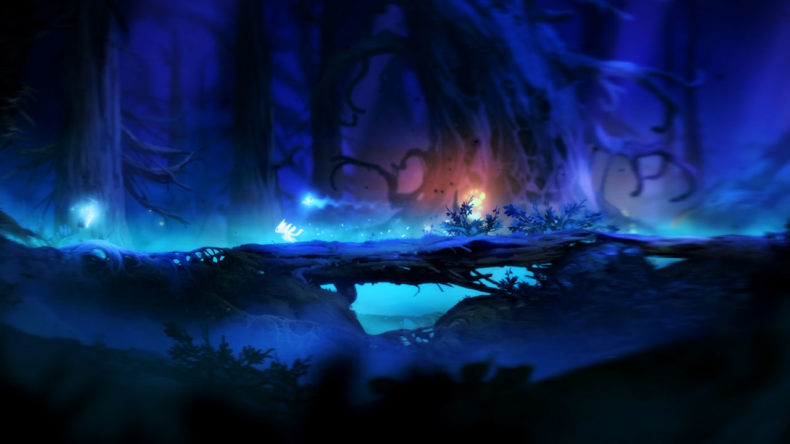 Switch reviews cover the Nintendo Switch version of a game. Ori and the Will of the Wisps was released on PC and Xbox One on March 11, 2020, and scored 9/10.

Booting up a game on a Nintendo console, only to be greeted by the Xbox Game Studios logo still feels odd. Microsoft’s decision to bring suitable titles to the Switch after launch feels like a victory for everyone. Getting to play a former exclusive in handheld mode is a joy, and the ports on these crossover titles have been nothing short of incredible so far. Announced as the grand finale of the latest Nintendo Direct, Ori and the Will of the Wisps is the latest game to make the transition to Nintendo.

Our spiritual hero Ori begins his second adventure with a new owl friend Ku, who is unable to fly. With a little help from his forest friends, Ori helps Ku get airborne and they set off on a majestic first flight. These heart-warming and jaw-dropping cutscenes unfortunately end in disaster, as our duo plummet to the ground and get separated in the fall. Now it’s up to Ori to find his buddy and escape the dangerous world they’ve found themselves stuck in. 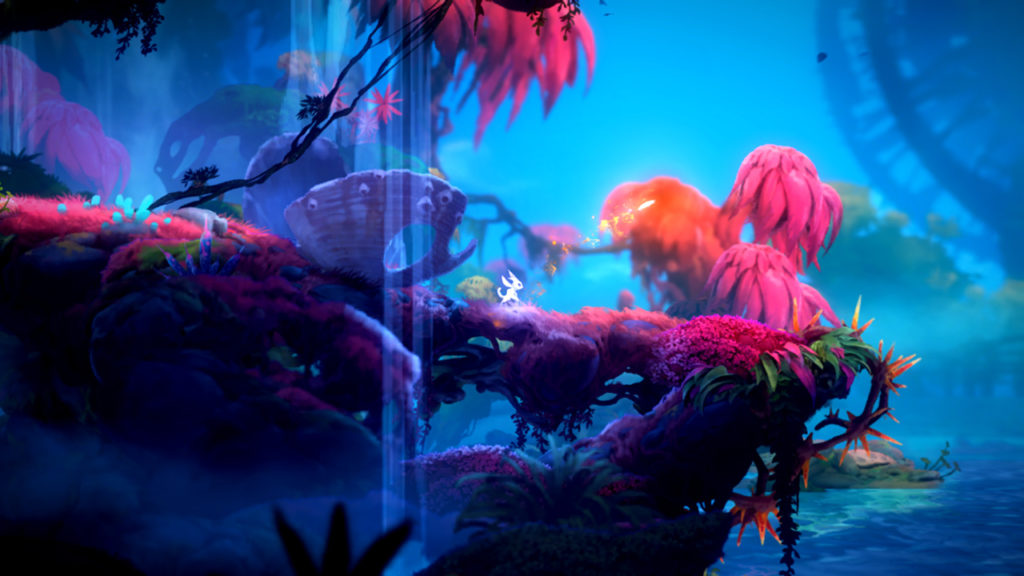 Exploring the eerie landscapes of Will of the Wisps is a delightful experience. Ori controls like a dream, and you’ll unlock an array of powers to help fling you across the map. Double jumping, dashing, and launching off buds becomes second nature, and combining your movement powers to grab a hard to reach collectable is always a joy. Whether it’s a bundle of orbs to spend on a map, or ore to upgrade your village, it’s always worth exploring every crevice in search of helpful items.

The main difference between Ori and the Will of the Wisps and Ori and the Blind Forest is in the combat. Dispatching foes is a much deeper and more enjoyable affair this time around, with three buttons you can map an array of abilities to. Combining different attacks to take down the foes of the forest is extremely satisfying, and when combined with shards that upgrade their power you’re sure to find an offensive combination you love. 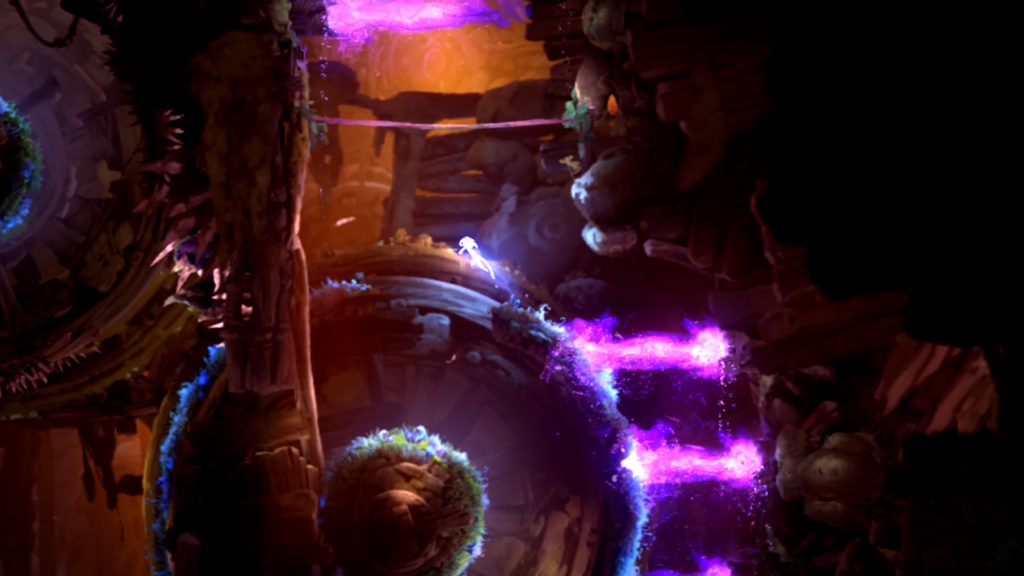 With only a limited number of slots to equip shards, you’ll have to choose buffs that suit your playstyle. For the majority of the game I just slapped on damage reduction and health-boosting shards for maximum survivability, but switching to a projectile-focused set up or a damage-dealing powerhouse can really help in some of the game’s tougher encounters. Shards can also be upgraded for a price, giving you yet another reason to leave no stone unturned.

I played through most of Will of the Wisps when it launched on Game Pass early this year, but was eventually put off by the myriad of technical issues that plagued the game on day one. We all knew the game would be arriving on Switch eventually, but optimising it for the weaker console seemed like a gargantuan task when the Xbox launch went so badly. 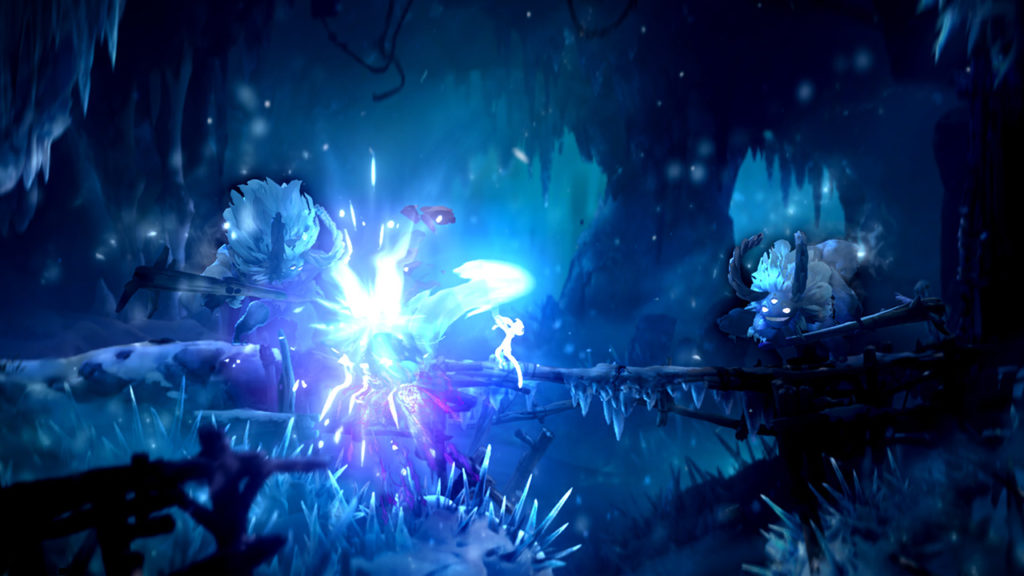 Fortunately, Moon Studios have performed some technical wizardry in porting Ori to the Switch. The framerate is stable, running at a smooth 60fps in both handheld and docked mode. Obviously the resolution has taken a hit compared to the Xbox and PC versions, but in handheld mode especially it still looks absolutely stunning. I did have a handful of hard crashes in my time with the game, but they didn’t happen often enough to detract from the experience.

Ori and the Will of the Wisps is still an incredible and beautiful adventure, and the Switch is the perfect place to replay it. It may have to take a hit to its resolution to run on the handheld console, but with a framerate smooth as butter, and some of the best visuals on Switch it’s worth double-dipping on Ori and Ku’s adventure.

Controlling Ori feels incredible, with each power adding something new
Combat is deeper and more enjoyable that its predecessor
An incredible port, with silky smooth framerate
Visually outstanding
An intriguing story full of emotion

Occasionally crashes entirely
Resolution is lower than on Xbox

Ori and the Will of the Wisps is one of the best Metroivanias in recent memory, and its Switch port is simply outstanding. With a buttery smooth framerate, and an aesthetic as gorgeous as ever, it's a title that might even warrant a double dip.