previous
One Punch Man: A Hero Nobody Knows review
random
next
Ori and the Will of the Wisps review
0 likes 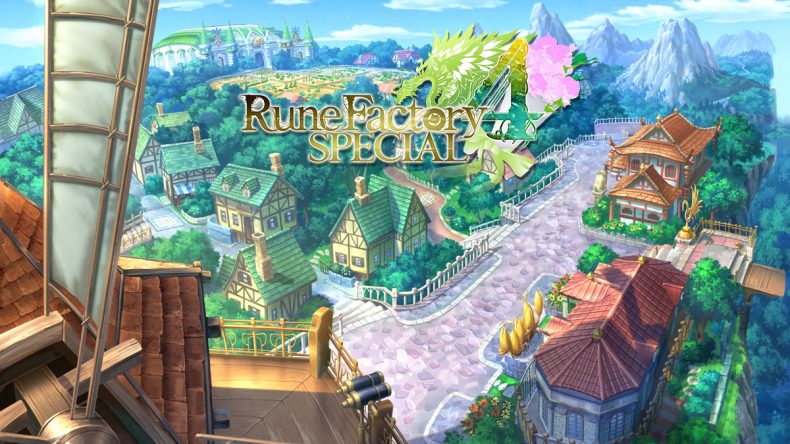 I’ve a confession to make: I have never played a Rune Factory game despite them encompassing a lot of what I like to play when I am in a certain mood. I like to potter about in games, finding my own enjoyment from doing mundane things like fishing, farming or making things look pretty. Rune Factory 4 Special satisfies a lot of that, with some added dungeon delving and a ton of content to work your way through. I just wish that it explained its systems a little better in the early hours.

You play as the heroine (or hero) who literally drops into the small town of Selphia from their airship. The fall has caused you to lose your memory and you are quickly mistaken for royalty and set to your tasks of improving and protecting the town to bring in more tourists. These tasks range from holding cooking and fishing competitions, to clearing the surrounding areas of monsters that threaten the safety of the village and its inhabitants.

This Switch version is a remaster of the 2012 game that launched on the Nintendo 3DS, and at times that shows with dated looking character models and text that looks entirely too small. It is also a shame that there has been very little done in terms of adapting the interface to incorporate the functionality of the touch screen. These are small niggles, though, in an experience I’ve largely had a great time with. The gameplay loop is pretty satisfying, however in the early stages there is a sense of aimlessness as you wander around the town chatting to the folk who inhabit it, and trying to work out what to do. Through a process of trial and error I managed to get into a rhythm of clearing the land around my farm and planting turnips, then selling them to make money to open up another tier of things to do. Working in the background is a compelling feedback loop of inter-locking systems that encourage you to repeat activities over and over. Engaging in tasks levels up a number of skills, for example ensuring I water my crops on a daily basis will level up the Water skill. This in turn gives me a boost to my water attack and will protect me from water based attacks. There are tonnes of skills to level up that range from throwing things, to cooking recipes, harvesting crops and even sleeping. Levelling them up has a positive impact on your RP or stamina, which acts as the currency you use to be able to perform tasks. Everything you do depletes it with some actions taking more than others. RP along with your health can be replenished by eating the plants that you grow and the meals that you can cook. By levelling up your skills you will decrease the amount of RP it takes to perform tasks, whilst also increasing the overall pool allowing you to do more and more in each day cycle.

The day cycle sets limits on your play style. In the beginning it is fairly easy to accomplish things as there is very little for you to do. However, once you have levelled up a bit and completed the fairly lengthy tutorial that spans several hours of play time you will need to get focused on what you want to achieve in each day. Spend a day re-arranging your farm layout, with the next focused on visiting a dungeon to farm for materials for the next day to craft better armour. It is all too easy to waste valuable hours in a day and not achieve much, so it is better to have some focus. There again, if you aren’t that way inclined and prefer a more relaxed approach, Rune Factory 4 has plenty of other stuff to keep you busy. Marriage is a big thing in Rune Factory 4, with a number of keen bachelors (or bachelorettes if you are a Prince) available for you to choose from. Chatting to them and giving them gifts helps you to build your relationship with a view to settling down with them and starting a family. This Special edition of the game also features some post-game content called “Newlywed mode” which provides extra content based on who you chose to marry in the main story mode, fleshing out a little more detail on your relationships. There is also the Royalty stuff to contend with. As a Royal you are expected to make royal edicts that are designed to help bring tourists to Selphia. You can set dates for festivals, purchase licences that allow you to do more complex things as well as increase your storage and dictate what is available for sale in the shops. The issue is that it feels a little under-developed and adds an unnecessary layer to an already fairly complex game.

Rune Factory 4 Special Edition is a delightful game. The localisation work on the text is great with some discernible character differences between the cast. There is a tonne of stuff to keep you busy, and the combat is surprisingly fun for a game I largely mistook for a faming-cum-life simulator. For returning players there are a few difficulty setting changes, as well as some post game episodes for you to unlock and play through after you have completed the story. It is a shame that much of the early game feels a little confusing and overwhelming, but the core loop of upgrading skills and setting yourself little goals to achieve soon overtakes any lingering feelings of being lost.

Rune Factory 4 Special is a delightful game with a ton of content to keep you busy, despite feeling a little overwhelming in the beginning. Good localisation and post-game content around character episodes and a Newly-wed mode will please returning fans.