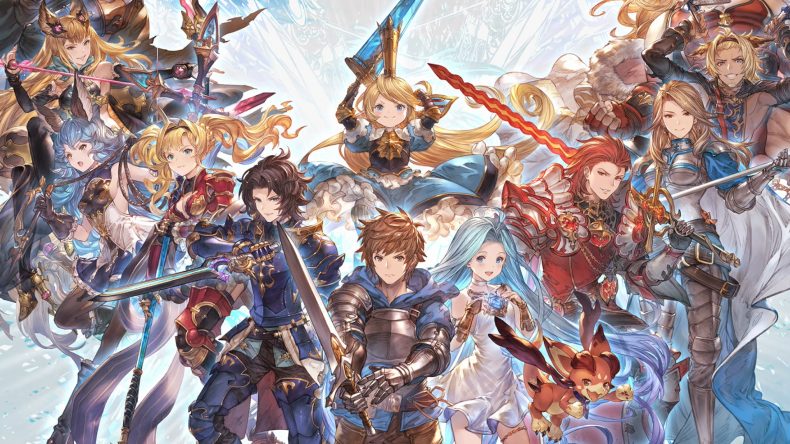 Arc System Works are past masters at using their sizeable one on one chops to create first-rate tie-in fighting games based on beloved intellectual properties. This astonishingly good adaptation of mobile gacha colossus Granblue is the latest in a stellar lineage that also includes Hokuto No Ken, Persona and Dragon Ball. In terms of how the rich fantasy RPG universe is used, Versus pulls off a terrific job of being loyal to the fanbase of the source material, whilst making it a joyous journey of discovery for a newcomer. Crucially, the fighting mechanics are accessible, fresh, and will appeal to scrap fans of just about every level.

In its original form, Granblue is prime medieval Uematsu-scored Final Fantasy stuff, with characters loosely based upon Arthurian legend, demonic foes drawn from biblical origins and classic JRPG gubbins like airships and turn-based battles. Arc have taken 11 of the most beloved characters from the series and given each of them their own unique combat arsenal. The roster, whilst small when compared to other modern titles of this ilk, features styles of combatant that will be familiar with fight buffs, including circular motion input grapplers, charge move merchants, and balanced all-rounders. Veterans will recognise that Arc have poured the characteristics of iconic fighting game faces into the heroes of the Granblue lore. There is something for everyone, and the smaller roster ends up being a strength rather than a weakness, as it presents an opportunity to take a deep dive and really learn the fundamentals without being overwhelmed by a vast array of what may be unfamiliar participants. There will of course be some DLC to follow, but straight out of the box so to speak, Granblue makes everything count, and is simple to pick up for newcomers, thanks to the intuitive systems at play, wide range of options, and world-class tutorial modes and command lists. The excellent fighting system employs all four face buttons, with the standard light/medium/hard setup joined by a unique attack. Unlike, say, Persona 4 Arena, where you will attempt to chain together sequential, increasingly more powerful attacks into a combo, Granblue has pre-loaded combinations that are activated simply by repeatedly hammering your attack button. There is the option to use the Skill button – a mechanic that maps each character’s four special moves to a button press plus a directional input. You can enhance these moves by pressing the circle button, but either way will have a cooldown period once you have done so. So far, so Super Smash Bros – but there is a reward for learning the actual trad fighting game inputs for these moves, as in mastering the Hadoukens and the Spinning Piledrivers and the charge and releases of this world, you can use them repeatedly without any cooling off period, with the exception of the circle-enhanced versions. This makes it a hell of a lot simpler to play as a newb, but still rewarding for old heads.

Encouraging you to learn doesn’t stop here. The in-game tutorials and command lists are probably the best I have ever seen in a fighter. Not only do they show you how to do stuff, but they also explain what things do, the strengths and weaknesses of certain attacks, and dispense advice on counters and matchups.

Joining the standard arcade and on/offline PVP options is a strange but oddly compulsive RPG mode, which represents a tour through the Granblue storylines, married to a bit of grinding for loot, pseudo-2D brawler gameplay, and the introduction of many NPCs that will be familiar to fans of the mobile game. It reminded me of, and made me want to revisit the beautiful PlayStation Portable classic Guilty Gear Judgement, albeit a more simplistic version of that ARcSys scroller. There is however a surprisingly deep weapons grid system that adds buffs to your selected fighter, a ton of plot developments to the point that a glossary is included for newcomers, and the overall sense that Arc has had a real go at including something a bit different, to appeal toward and entice the millions of mobile RPG gamers who may be approaching a fighting game for the first time. Besides the fact that the fighting action is an almost instantly gratifying and thrilling experience, oodles of praise must be levelled at the absolutely sensational visuals. Arc has a knack of making 3D models look like super-sophisticated 2D sprites, and here they are over-stuffed with character and panache. Super moves, known as Skybound Arts, are spectacular OTT slices of flawlessly incorporated anime, and the bouts are bookended by wonderful introductions, post-fight celebrations and cutscenes. It reduced me to a rictus grinning, goosebump-y state of euphoria, and has to go down as one of the most beautiful looking fighting games of all time. It also made me almost instantaneously fall in love with the characters in a manner I haven’t experienced since my love affair with Fire Emblem.

Producing a tie-in that is stylistically completely at odds with a role-playing game as hugely successful as Granblue Fantasy is a big gamble. Konami and Squaresoft are past offenders – witness the horror of Castlevania Judgement and Ehrgeiz – but boot up Versus and you feel that this bold step will payoff twofold. On one hand, the fan service, interesting storylines, RPG-lite elements and the ability to control beloved characters in a new setting will draw in the core fanbase. There is also definite scope for future DLC, make no mistake. But the real success here is that this feels like the start of a special new fighting franchise for the company, to join their duo of heavy hitters in Guilty Gear and Blazblue. In short, it’s an absolute triumph.

Looks INSANE
Accessible, simple to learn, tons of depth
Tutorials are the best ever

Arc System Works return to the fighting fray with a sumptuous take on the Granblue Fantasy Universe. An essential purchase.