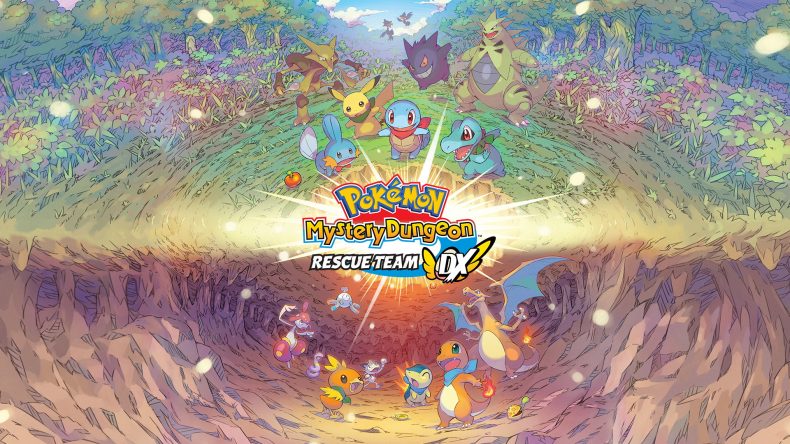 Rarely have I felt so judged by a game before I’ve even started playing, than Pokémon Mystery Dungeon: Rescue Team DX. To begin the adventure I must become a Pokémon, choosing from a selection of well-known favourites. But, before I can, I’m asked a series of questions to best match one to my personality. With my test complete, apparently I’m a hardy type who gets stuff done, which I politely accept before I’m then accused of being stubborn and potentially feuding with friends. I take it on the chin because the reveal is I’m Bulbasaur, which is clearly amazing. I choose Eevee as my partner in crime, and we’re off: Rescue Team Awesome is officially open for business.

The story and core gameplay mechanics from the DS and GBA originals are largely unchanged. You are a Rescue Team and embark on quests to help out Pokémon in need. This requires you to go dungeon-crawling in randomly-generated dungeons, fighting off enemies, and looting treasure. Movement and combat are tile-based and each Pokémon has four abilities they can use to defeat enemies. There are lots of items to help you out, some heal, others attack enemies, whilst others remove debuffs. Carefully selecting the Pokémon and items to use and when is the key to victory. The most obvious upgrade over the original is in the visual department. The pixelated graphics from the GBA era have been updated and boy does this game look adorable now. It’s a delightful mix of almost cel-shaded character models and hand-drawn landscapes. It feels perfectly in keeping with the cute Pokémon universe and the endearing monsters who live within it. At times the hand-drawn style reminded me of A.A.Milne’s Hundred-Acre-Wood with its delicate watercolour shading and free-flowing lines. It’s a style I couldn’t help but love as I played. It reminded of Yoshi’s Crafted World, offering a similar vibe of gleeful charm whilst playing.

Perfectly accompanying the beautiful visuals is a lovely musical score. It ranges from soft, almost unnoticeable background melodies to rousing tunes during particularly grand dungeons. As is often the Nintendo way, there are a few catchy tunes that provided a few earworm moments during my time away from the game. There’s also a clever use of little sounds to notify you of certain events or conditions. With so much happening at once, it can be tough to keep on top of things. Little chimes or whirs often caught my attention well before I’d noticed the on-screen notification.

For all the good work the sound and visuals do, the gameplay is sadly more of a mixed bag. This is mostly due to the design decisions from the original. It’s definitely repetitive, as all dungeon-crawlers are. However, these dungeons can go upwards of twenty floors and can begin to grate on you over time. Quests also have little variety, all of them are just finding Pokémon or items on a given floor. There’s also lots of unskippable text to sit through each time. Moving around can feel fiddly and slow, and I’d often get stuck on the corners of corridor entrances because I approached them diagonally. The run button allows you to sprint in a given direction to speed things up. It does its job, but it’s over-cautious in stopping for every little thing, halting your momentum. Often, I’d simply revert to the auto-move function as this was the most efficient way to move around despite it making exploration quite passive. The repetition does, however, reward you with story progression and your Pokémon leveling up from dungeon combat. And if you’re clever and complete lots of quests in the same dungeon, you get decent rewards making the grind worth it. You’ll meet a range of different Pokémon enemies, some of which will want to join your team in that dungeon. If you’ve spent sufficient coin establishing a suitable home for them, they can even join permanently. You can then take one of them with you, increasing your team to three. It definitely has the Pokémon vibe as you try and recruit as many monsters as you can. You can pretend it’s to give you more options for future quests, but really, it’s the addiction we all know and love – you’ve gotta catch ‘em all.

There is a jarring part of the story about a third of the way in, that greatly restricts your rescue team options. I won’t spoil it here for those who haven’t played the original, but it seems to undermine its own ideas somewhat. You can’t bring rescued Pokémon with you during this time, which felt like a kick in the teeth given how much I’d invested in rescue camps. Also, failure on a quest sees you lose all the items and coins you have including everything you took with you at the start. It’s harsh, but for most of the game, simply buying items from a shop or a quick easy dungeon grind would see you restocked. This particular section doesn’t allow for any of that and sticks you in a depressingly short loop with limited options. It also has a notable difficulty spike that the game occasionally suffers from. It’s not insurmountable, but it’s less fun than other parts. But Pokémon Mystery Dungeon Rescue Team DX does get a lot right. The writing, whilst nothing special, is full of positivity and over-exuberant enthusiasm that you can’t help but enjoy. Balancing your movesets, Pokemon and items in a dungeon requires a level of strategy that belies it’s simple, positive exterior. And when you get a particular set up which carves through enemies with ease, you feel particularly bad-ass. There are checkpoints that refill your health and other stats, and let you manage items. These are particularly useful on those floor-heavy dungeons. The Dojo, where you can train your Pokémon in between dungeons, is also really useful for getting an Experience boost ahead of a tough new quest.

Ultimately, Pokémon Mystery Dungeon Rescue Team DX does enough to warrant its remake status. The visuals, in particular, look gorgeous and with the music, really bring it to life and exude optimism and joy that feels wholly Nintendo. The gameplay still has some missteps in some of its decisions and restrictions at certain points. But despite this, it’s quite addictive and I enjoyed playing it through to the end. And it’s also worth mentioning that after the credits roll, the amount of end-game content here is commendable. There is a lot to get your teeth into, and plenty of excuses to continue expanding your rescue team. It’s not perfect, and certainly one for fans of the genre and the Pokémon series. But those that do spend time in its charming, pretty world will find plenty to enjoy.

Repetitive gameplay
Some jarring sections
Movement can be cumbersome

Pokémon Mystery Dungeon Rescue Team DX has a few repetitive frustrations but is still charming, addictive fun and lovely to look at.

You may also like
nintendoPokémon Mystery Dungeon: Rescue Team DXReviews