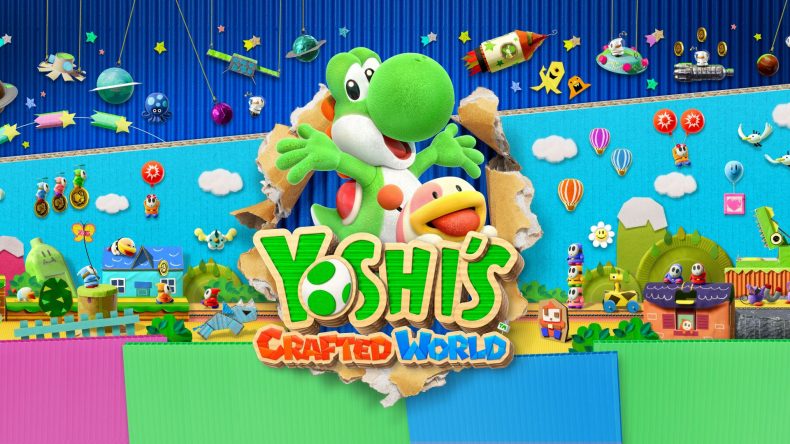 Nintendo is renowned the world over for making charming and enjoyable games, and none fit that example more perfectly than Yoshi’s Crafted World. The company is famous for taking simple concepts or experiences and creating unique titles from them, such as the Pikmin franchise being borne from lead game designer Shigeru Miyamoto’s memories of exploring his garden as a child. And it’s clear with this new instalment in the Yoshi series that the inspiration comes from childlike creativity and imagination. It harks back to those childhood days when you’d while away hours crafting something from leftover materials, and use what you’d built to create stories for your own amusement.

To emphasise the point, all of the levels and over-world are made up from various crafting materials. So you have trees made from cardboard tubes, rocket ships made from plastic bottles, or clouds cut from cardboard that are stuck to string with tape, and hung from above. It captures the creative magic of a LittleBigPlanet or Super Mario Maker title but dials it up to 11 thanks to the memories it conjures up and the unashamedly rustic look that it adopts, reminiscent of our childhood creations.

As stories go, it’s standard Nintendo platformer fare. A group of Yoshis are happily minding their own business on their island, when Baby Bowser appears with the evil wizard-cum-nanny Kamek who try to steal the Sundream Stone to make his petulant master’s dreams come true. In the foray, everyone is flung to a nearby island and the Sundream Stone loses its gems, rendering it useless, and it’s up to the Yoshis to recover them and return home. Progression towards the gems is through various mini-worlds, each of which is a crafted diorama that springs to life when unlocked. Within each of these are two or three levels to complete before you can move to the next. The order of the day, as well as reaching the level’s exit, is to collect flowers, with anywhere from four to eight being hidden in each course. You also get bonus flowers at the end of a stage if you’ve managed to collect over 100 coins, ended with full health, and found the 20 red coins masquerading as normal coins. Collected flowers are then used to pay tolls to the friendly island inhabitants to unlock the next world.

Gameplay is similar to previous Yoshi titles with his ability to flutter in the air for extra air-time and the ground stomp making returns. Also his signature stretchy tongue move lets him gobble up enemies and transform them into eggs. Yoshi’s Crafted World adopts a 2.5D perspective, meaning these eggs can then be fired at enemies or objects in the 2D plane, but also into the foreground and background. Eggs are fired to interact with the scenery, often unlocking secrets or coins along the way. There are also certain parts of levels which allow Yoshi to move nearer or farther away from the camera, revealing further secrets or alternative routes to take.

The levels themselves are where the game really shines, and despite there being 40 of them before the final boss battle, they all feel unique from each other and provide a wide range of settings and experiences. There’s regular platforming in various locales ranging from the treetops to a haunted house and an arid desert. Alternatively the levels sometimes mix it up and you could take on more varied exploits like competing in a solar-powered kart race, or controlling a giant robot Yoshi and destroying everything in your path. You never quite know what to expect next, although one thing is for certain, the levels never fail to coax an impish grin to your face, either through their execution of ideas or simply for their creativity in embracing the crafted nature of the world you’re in. In terms of difficulty, Yoshi’s Crafted World lands about where you’d expect, not as challenging a title as Super Mario Odyssey can become but tougher than, say, Kirby Star Allies. What’s on offer here is a relatively flat learning curve that definitely does increase the difficulty by the end of the game, but never to levels that frustrate or annoy. I will admit to dying a few times during my playthrough, but usually in isolated incidents where I tried to rush or over-complicate things. When tackling them a second time, I would overcome them with ease, having learned what I needed to do. It’s very much a slower-paced platformer, rewarding exploration and careful consideration of the obstacles in front of you. And that tempo feels in keeping with the theme of imagination, as you take time to not only note what dangers you must overcome, but how they’ve been created in this new unique world you’re exploring for the first time.

And that exploration doesn’t have to be a solitary experience. A second player can join the fun and you tackle each level together, each controlling a different Yoshi. A couple of new mechanics are introduced; not least, you can actually swallow your partner and fire them at enemies or objects, as well as jump on one another for some Yoshi-back riding. When in this conjoined mode, one player controls movement, whilst the other fires eggs, requiring communication and cooperation in equal measure. Whilst it definitely is fun to join up with a friend to play, if anything co-op play actually frustrates the experience somewhat. It definitely lengthens the time to complete a level, which is understandable as two of you are now traversing it, but it also inadvertently increases the challenge. More often than not I’d accidentally swallow my partner when I meant to gobble up an enemy. And as mounting one another is automatic if you jump and land near each other, in particularly perilous or time-sensitive sections it can be difficult to keep track of where you are, and in control of what you want to do. It was still fun, as bonkers co-op always is, but it definitely made me appreciate the control and calm of a single-player experience that little bit more. The game itself has a lot of content in the way of collectibles, because as well as simply collecting flowers in the level and those rewards at the end, you also get the option to play the levels again in reverse. This time you’ll be on the lookout for three barking Poochy Pups who have hidden themselves in the level, and either touching them or firing an egg at them brings them to your side. Reach the end of the level and you’ll get another flower for each one you found successfully. Get them all within an agreed time limit, and a further bonus flower is yours. Playing the levels in reverse is a nice addition, as it shows off a very different perspective, often showing you the reverse of the constructed level. With that comes almost a peek behind the curtain of the Nintendo creativity as you see unpainted bits of material or undisguised bits of tape which hold the level intact, further bolstering the look and feel of the crafting aesthetic.

In addition to Poochy Pups hunts, the inhabitants of the dioramas will have various souvenir hunt quests for you to complete. They task you with finding specific items in each of the levels, all of which require a trusty egg throw at to demonstrate you’ve found it. Find all of the items for a quest, and you’ll be able to exit the level, and return to your friend for a shiny, you guessed it, flower. In addition to flowers, the coins you collect are added to a cumulative total and you can spend these in a gumball machine in each world. In each machine are ten costumes you can unlock, and when wearing them give you invulnerability of up to four hits of damage depending on the costume rarity. This can be perfect for looking to snag the full health flower at the end of each level, as it gives you a bit of breathing space.

If that all sounds like a lot, it’s because it is, and with that comes the biggest note of caution for those playing Yoshi’s Crafted World. Because you can quite easily get sucked down the completionist rabbit hole, and up trying to find every flower, poochy pup, red coin and souvenir. To be honest, if you do, the game suffers for it. For context the main game has nearly 650 flowers to collect, but you need well under 250 to reach the final boss. For a title that strives to be about imagination, it suffers in the ideas department outside of the levels themselves. Sure, playing in reverse is fun and quirky the first few times you do it, but it doesn’t change things up that much, and I think during my entire playthrough I only discovered one secret in reverse that I hadn’t found in the normal level. And the archaic way the Souvenir Hunts are sequential means only one is available at a time, so every time you complete one, you have to return to the inhabitant, to then be given the next. There’s no reason why a list of souvenirs couldn’t be shared upfront, and then rewards given upon completion. It would have certainly helped speed up the task, and perhaps made it more enjoyable than it ended up being.

As it stands though, it can take well in excess of two hours to find everything in a single world of just several levels, and that is relying on you having found those elusive red coins first time around. Replaying the levels will also see you amass an absurd amount of coins, which takes the joy and surprise away from the cute gumball machine, as you simply pay for all ten costumes in one fell swoop unconcerned with the impact on your wallet.

The solution then? Simply play Yoshi’s Crafted World’s main levels, and maybe dip into reverse for some Poochy Pups if you fancy it, but certainly don’t sweat about getting everything. There’s still plenty to enjoy, and with that approach, you can enjoy the game’s trump cards which are undoubtedly the wonderfully creative levels full of their own unique style and personality. Yoshi’s Crafted World isn’t quite the perfectly crafted experience, but it is thoroughly enjoyable and hits that sweet spot where great design meets undeniable Nintendo charm.