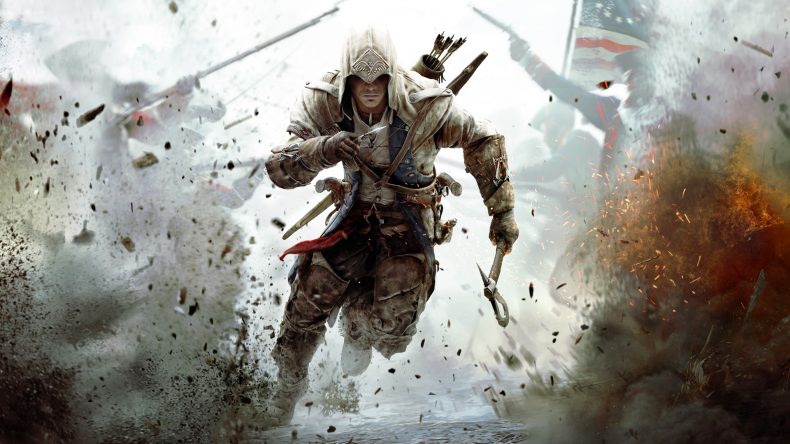 When it comes to video game franchises, Assassin’s Creed is probably my favourite. There’s something so liberating about traversing so many different cities throughout history, meeting iconic figures that have shaped our world and the way we live our lives. Ubisoft has always managed to bring these worlds to life, whether you’re Ezio in the renaissance period of Italy, or Edward Kenway sailing the seas of the Caribbean in Black Flag, there’s so much wonder and excitement. Right before Origins, the series was growing stale, but a few years without a release gave them time to implement new mechanics and create a larger and more vital world, reinventing the franchise and breathing new life into the franchise.

I’m not claiming that every game in the series has been great – far from it – but I personally enjoyed each and every one. Well, almost each and every one. When Assassin’s Creed III came out back in 2012, I was starting to feel a little jaded with the series. I adored Ezio’s story, even if Revelations did little to change up the tried and tested formula, and Altair’s journey in the first game was the catalyst that set alight my love for the franchise. Still, I played it because it was more Assassin’s Creed, but unfortunately I grew tired of it rather early into Connor’s adventures. It took a long time for the game to get going. Whilst Haytham had charm, it never felt like the story really started until you began playing as the assassin Ratonhnhaké:ton, more commonly known as (and thankfully named) Connor. Whilst the 18th century setting of Colonial America during the American Revolution was an interesting decision, I felt no real connection to Connor. He lacked the enthusiasm or wit of Ezio, and when coupled with the consistently dull modern day setting featuring Desmond “more personality in a box of matches” Miles, I lacked any inclination to finish it. When Ubisoft announced Assassin’s Creed III was getting a remaster, it seemed like an odd choice. Still, it gave me an opportunity to revisit the one game in the Creed’s lineage that I wasn’t at all fond of.

After playing Origins and Odyssey, it was instantly recognisable how far the development has come within the franchise. Running around Boston and climbing up a fruit cart or a fence by mistake became a regular occurrence, and climbing down buildings was severely lacking the fluidity of the titles that came after. Movement is slow in general, and whilst it was great to be able to take out multiple enemies in quick succession, combat was also much more cumbersome. Visually, the 4K enhancements to its resolution are noticeable, making every location look fantastic. That is, when the glitches and texture popping don’t occur. Unfortunately, it was much more frequent than I would’ve liked. NPCs floated through the air, buildings appeared out of nowhere, and the distant environment was rarely in view until you got within 100ft or so. Character models look shinier, but because it’s an old game, some of them looked like mannequins, noticeable more in the cutscenes. Lighting has been improved, making many of the environments glisten under the sun, and the textures have also been touched up.

When it comes to gameplay improvements, there have been some changes that make it easier to craft and upgrade. Thanks to a new in-game economy, you now have a clearer picture of what you need to do, unlike before where it was often a struggle. Stealth has been brought up to speed as well, allowing the ability to hide in bushes to avoid detection. Not only that but you can now whistle to call enemies over. It has become a staple of the franchise now, but back in 2012 you didn’t have the ability to do it. If you’re colourblind, Ubisoft has added options to help aid you with certain settings for the updated UI. Little improvement seems to have been made to movement, and with it being a key element to the Assassin’s Creed games, it’s a little disappointing. Free running is fine, but when you’re climbing up and down buildings you can’t do so as fluidly as you can in the more recent titles. Combat has been improved, though. You have much more control for double assassinations, and having better aiming implemented for Connor’s bow means you have more control when taking out Templars from farther away.

The remastered version also includes all the DLC, as well as the Tyrany of George Washington expansion and Assassin’s Creed Liberation, so there’s plenty of content to get stuck into once you’ve finished the main game. I still feel the same way about Assassin’s Creed III, but Ubisoft has done a fair amount of work to make it appealing to those who may have missed it the first time around.

We’ve been spoiled with the last two games in the franchise, and going back and playing Assassin’s Creed III feels archaic. It’s far from being a bad game, but the glitches and technical issues that hampered my enjoyment did nothing to change my mind about the one game in the franchise I didn’t care about when it came out over six years ago. Still, if you’re intrigued by the setting, and want to go back and play the games that shaped the series, it’s something you should do when you have a bit of downtime in your calendar.

If you never played the original version, you should certainly give it a go, but if you were never a fan, the limited improvements to movement and the variety of glitches puts a downer on proceedings.